The University of Narcissism 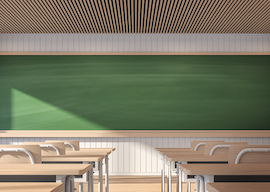 Most Americans now take it for granted that universal education is a good thing, including in particular “higher education.” To be sure, only about a quarter of American adults have a bachelor’s degree, but even so, it’s commonly thought that the more of us who go to college, the better. A citizenry, after all, needs to be educated and informed, able to debate the important issues of the day, as opposed to just asserting their biases—the natural, and frequently vulgar, instinct of mankind.

Yet it is trite but true that all life is trade-offs, so it’s worth contemplating whether fulfilling the university mission, and maintaining academic standards, are compatible with the presence of a massive number of persons of average and of below-average intelligence in academia. There is also an important gender issue here: Men and women are different; those differences are not just social constructs; and as university bureaucracies increasingly are dominated by women, it seems clear that, as in the cases of the family and the workplace, the gender equality experiment is hardly an unmixed good in academia.

Consider the fate of Eric Thompson, who was fired in the fall of 2017 from his job as a sociology professor at Moreno Valley College in Riverside, California, where he had taught for eleven years. The firing was the outcome of three investigations by the school: one in 2014 after Thompson led a classroom discussion on the nature-nurture element of same-sex attraction; another in 2015 after he led a classroom discussion on the Supreme Court case to legalize gay marriage (Obergefell v. Hodges); and a third after a student complained that Thompson gave her a D because she is a lesbian, and contacted her via email to try to resolve the issue, allegedly violating a no-contact order from administration.

In November 2018, a court arbitrator ruled that the Riverside Community College District had to give Thompson his job back. Then, in July 2019, after the district sued to overturn it, a Riverside Superior Court judge upheld that ruling.

Still, last month the college district appealed again, and lost the appeal earlier this month. So now the district has filed an appeal with a California appellate court, and Thompson, the father of eight children, still hasn’t returned to his former job teaching sociology at Moreno Valley College.

On Tuesday, in a written statement provided to The College Fix by district representative Renee Vigil, Riverside officials said that they are “concerned that the trial court’s decision to uphold the arbitration award discredits and ignores the accounts of multiple students who testified at the hearing about witnessing Professor Thompson’s statements targeting LGBT and women students.”

That vague, insidious, question-begging word “targeted” betrays the frivolity of these officials. It is often said that voter ID laws “target” blacks, the reason being that a disproportionate number of blacks, unlike whites or Asians, do not have an identification card. In academic and intellectual contexts, “target” functions with similar mindlessness: If you say something that anybody but a white man disagrees with or doesn’t like, then you are “targeting” him or her. Quite childish, of course, but this is reality in 2019.

According to Thompson, the administration was troubled by the fact that he showed the film Understanding Same-Sex Attraction in his class in 2014. “This video gives the testimony of four or five men who, they got therapy and they were actually able to see themselves as attracted to someone of the opposite sex,” Thompson said in a video produced by the Pacific Justice Institute. “I presented both sides of the issue,” he explained, “is it biological, is it social? The nature-nurture debate.”

“The new purpose of so-called higher education is to teach one how to live like a child—indeed like a spoiled brat—all through adulthood.”

Now one would think that this is precisely what a college professor is supposed to do: present the subject in a comprehensive, impartial way; then let the students decide what they think about it for themselves. Isn’t that partly why they’re in college in the first place? Needless to say, the interest of the “nature-nurture” debate is independent of student identity. A person who doesn’t understand this simple fact needs to grow up.

Besides, according to the largest study to date on the genetic basis of sexuality, there is no gay or straight gene, and sexual orientation may be more malleable than conventional wisdom suggests. At any rate, the nature of sexual orientation is an open question, and serious intellectual discussion must reflect that.

Many people, in their quasi-religious love of “equality,” will be inclined to dismiss such questions, deeming them too harsh or ungenerous. But such responses are weak: A concern is not illegitimate just because it raises a possibility that’s contrary to what we want to be the case.

Throughout academia, it is dogma that gays and trans persons are “born that way,” and if you dissent from the party line, you’ll probably be accused of “targeting” “marginalized peoples.” This has happened, for instance, even to Camille Paglia, who is gay herself. But if on this subject, as on so many others, people on the whole show themselves to be incapable of detached, rational inquiry, what should we conclude about the tenability and desirability of mass university education as a whole? Is it worth it?

Thompson claims that the 2015 Riverside investigation of him resulted from a “great” classroom discussion on same-sex marriage, which went on as the Supreme Court debated Obergefell v. Hodges. “It largely went well,” Thompson said, “except for…an older student of mine—who objected and eventually left the room.”

Well, as the saying goes, if you can’t take the heat, get outta the kitchen.

The problem is that the student made several complaints to campus officials about even discussing the Obergefell decision. Thompson alleges that he took a “neutral stance” on the subject, for offering his personal opinion would be a “disservice” to the class discussion. Nevertheless, Thompson was investigated for leading that discussion.

Strike three against Thompson was the D he gave to the lesbian student, an absurd affair that culminated in him being escorted off campus by two police officers. Thompson says he sent the woman an email in which he said that he was unaware of her sexual orientation. Seeking to resolve the matter, Thompson wished the student well. But he was removed from campus since he had violated a no-contact order, although Thompson claims he received no such order.

In its statement to The College Fix, the district alleged that Thompson attempted to “influence a student complainant into withdrawing her complaint.” Doubtless Thompson believes that the complaint was neither necessary nor reasonable, but again, academic bureaucrats typically have an ax to grind. Often rational and disinterested consideration of where other people are coming from is of no interest to them. It’s no accident that their decisions are so often at odds with the findings of actual law courts.

“Ordering the district to retain Professor Thompson as a faculty member places female and LGBT students and employees at further risk,” according to the Riverside officials, who said that students felt “fear, humiliation, anger or anxiety” because of Thompson’s classroom statements.

In other words, the new purpose of so-called higher education is to teach one how to live like a child—indeed like a spoiled brat—all through adulthood. To be asked to question your assumptions is to be put “at risk.” Negative feelings are as essential to the life of the mind as to life itself, but to be “educated” these days means taking flight from reality.

I do not think we can understand the steep decline of academia without considering the rise and role of women, who are very influential in university administrations, especially when it comes to identity politics. It is certainly not difficult to imagine an all-male or male-dominated context being insensitive, harsh, or cruel. Yet it is surely impossible that the tyranny of precious feelings that we now see in academia would occur in any all-male or male-dominated context. In these endless stories about hurt feelings on college campuses, women students, women professors, and women administrators are massively overrepresented, like the neurotic student who, failing to separate her personal “issues” from academic performance, believed that she got a D because she’s a lesbian. (Of course, other groups—blacks, Jews, gays, trans persons—are also overrepresented in such stories, but of all these groups, women are by far the most numerous, and hence the most influential.)

Such a failure, however, is quite in keeping with what we know about the nature of sex differences. On average, women are more sympathetic to others’ feelings than men. They are also higher in neuroticism. So they tend to be more upset by “insensitive speech” than men, and being more egalitarian, more conformist, and less open to ideas than men, more likely to want to censor it, and to punish those who don’t conform to progressive groupthink, whereby anything you don’t like is evidence of your perpetual victimization.

Again, I am speaking in terms of averages, of statistical group differences—and in our huge country, there are, let me stress, many tolerant, open-minded, nonconforming women. Nevertheless, as in journalism and in publishing, the collective influence of women in academia seems to be rather baleful, and I do not see, based on the evidence so far, that a thriving academia is compatible with having a large number of women in it.

Jack Trotter, in an excellent recent article in Chronicles, writes:

Cumulative statistics from the Rosenberg Self-Esteem Scale show that…we have seen an exponential inflation of self-esteem indicators, particularly among the cohort ranging from middle-school to college-aged students. At present, on a 40-point scale with 40 representing “perfect self-esteem,” 51 percent of this cohort score in the 35+ range. That’s about 10 to 15 points higher than the historic normal range. The factors influencing this epidemic—if that term is not too hyperbolic—are complex, but one key cause may be that our once-admired American individualism is no longer restrained by the traditional sources of morality and authority, which kept it in check….

Inflate the young and ignorant with belief in their own importance and merit, irrespective of what they have actually accomplished in life, and see what havoc the narcissistic little monsters proceed to wreak in the culture, particularly once they have “grown up.”

Trotter is certainly right that “traditional sources of morality and authority” no longer serve to check our destructive individualism. And a major reason is that our culture no longer values authoritative men, but rather eager doormats. Accordingly, in university stories like Eric Thompson’s, it seems to happen more often than not that the accused abjectly apologizes as a matter of course, even though he had done nothing wrong. If academia is to cease being a national liability, it will take a lot more men like Thompson—that is to say, men who have spines.

Checking narcissism may be an even greater challenge. Preserving and transmitting “traditional sources of morality and authority” has always required men who think it is their duty to guide and lead others. Social order is eminently a male affair—it is largely men, after all, who produce vast systems of rational social organization, whether these go by the name of government and law or philosophy and religion. Men are still needed as authority figures—in fact, they have never been so needed—but it remains to be seen whether enough of them, in a hostile culture, are willing and able to do the vital work.