The Waning Luxury of Being Color-Blind 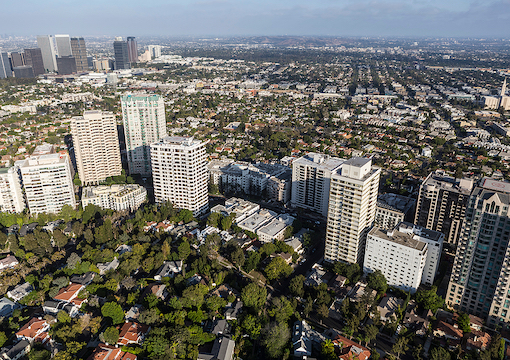 Folks on the right love to pontificate about L.A. with no concern for accuracy. Case in point: Last month a well-connected film financier jumped to his death from a building in Century City, and needless to say, everyone on the “conspiratorial” right just had to weigh in with “Hollywood pedo cult” or “Hillary suicide” theories. The problem was, these brilliant detectives (like this lamentably popular dumb-ass) had no idea what “Century City” is, so they invented a story that somewhere in Hollywood (because all film people work in Hollywood, right?) there’s a “Century City Building.”

Century City is a district in West L.A. It’s a stupendously wealthy collection of banking high-rises and media corporate HQs. It’s also home to many top talent agencies and entertainment lawyers. It’s far from Hollywood in geography and spirit; whereas Hollywood is a magnet for scummy hobos and druggies, in Century City you can pretty much eat off the sidewalks (and, considering that it’s my favorite haunt, on many a stumbling, drunken night I probably have).

My point is, when confronted with the unfamiliar (“Century City”), these right-wing “investigative reporters” decided that it wasn’t worth it to do a simple Google search and learn something new. Instead, they lied to sound smart and get hits, likes, and shares. The desire to spin a red-meat narrative trumped the desire to comprehend, inadvertently robbing the “sleuths” of their credibility (would you accept financial advice from someone who doesn’t know what Wall Street is? Then don’t swallow “red pills” about the entertainment industry from someone who’s never heard of Century City).

Now, Beverly Hills, where I reside, is to the immediate east of Century City, separated by bureaucratic map lines but no actual border (to the uninitiated, it might as well be the same place). And last month, when BLM thugs started terrorizing our neighborhoods at 1 a.m., blaring music and vandalizing homes, the reaction on the right was essentially, “Good! Those left-wing Beverly Hills a-holes are getting what they deserve.”

Fox & Friends: “Hypocritical Hollywood cheers on protests but not in their own rich neighborhood, not when the protest arrives in the A-listers’ Beverly Hills backyard.”

“Decades of indoctrination have made white Americans reluctant to pursue any cause—even their own safety and well-being—in the name of their race.”

New York Post columnist Miranda Devine (an Australian): “It’s a rich vein of hypocrisy from the Hollywood celebrities and the wealthy liberals who have their gated, beautiful estates and their private security, and they’re all very supportive of these protests when they occur in other people’s cities, and yet they don’t want it close to home. Woe betide that any of these wealthy liberals would have to lose an iota of sleep.” Devine also claimed that the city had yet to be “touched by” any rioting.

HotAir: “The wealthy liberals who carefully maintain their woke public images suddenly revert to a Not In My Back Yard (NIMBY) mentality when the mobs come for their neighborhoods.”

InfoWars: “While celebrities and wealthy virtue signallers are all too eager to rally behind leftist mobs with support and donations, they will be assuredly safe in their gated mansions from recent ‘protests’ involving loud music that went on til 1am (the horror).”

Prominent black “conservative” David Harris’ website cheered the fact that BLM is now targeting “wealthy, white, weak people”: “The only areas the wealthy white donors don’t want to see rioting is in their neighborhoods or at their businesses. Black Lives Matter decided they would next target the rich, white, and famous in Beverly Hills. As I said, the wealthy, white people don’t want them rioting in their town.”

Okay, time to educate some dipshits. Beverly Hills is not an exclusive gated community. We’re a city of 34,000 people, half of them renters (our median income isn’t even in the top 10 of L.A. County). We have neighborhoods with mansions, and neighborhoods with old apartments. There are far more exclusive areas in the county (the actual “gated communities”). And the riots touched us and touched us good; our retail district was trashed beyond recognition (perhaps Ms. Devine should confine her reporting to baby-eating dingoes).

But here’s the kicker: In 2016, the only district on the entire Westside that went for Trump was in Beverly Hills. Yes, Trump won here. Didn’t know that little factoid? Perhaps you were too busy searching for the Century City Building to hear the news.

We’re neither all wealthy, nor all leftists.

BLM is targeting us because of race, not wealth. The terrorists are under the impression that we’re a “white” city. Putting aside that we’re 30% Persian and heavily Jewish, BLM sees us as “white,” and what they’re workshopping here with the late-night residential raids is a form of terror not seen in America since the KKK’s midnight rides through black neighborhoods: the intentional disruption of life and security in neighborhoods that are specifically targeted because of the race of the residents.

The Alinsky types who comprise the brains behind the BLM brawn were quite clever to field-test the terror raids in Beverly Hills. They knew that rightists would cheer the sight of “Hollywood leftists getting what they deserve,” thus the tests could continue unimpeded by negative coverage from Fox or the right-wing blogosphere. That’s how predictable and easily manipulated the right is; BLM knew your spin before you did. Faced with a choice between intelligently strategizing a way to put the kibosh on this new antiwhite terror campaign, or profiting from it via juicy blog posts that positively spin the raids, most rightists chose the latter.

And while the right blogs, the left accomplishes. For example, leftists excel at manipulating the legal system to safeguard their extralegal activities (BLM lawyers are in court right now to prevent Beverly Hills from stopping the late-night raids), to crush their foes (like the Proud Boys), and to block policies that threaten their agenda. Leftists understand that even a thin legal premise can move mountains with a little venue-shopping and a sympathetic judge.

Prior to launching their police defunding campaign, leftists already knew the firmness of their legal ground. DeShaney and Gonzales are two SCOTUS decisions, products of the conservative majority, noch, yet beloved by (and hugely useful to) leftists. Simplified, SCOTUS ruled that you have no legal right to police protection. That’s why city leaders in hellholes like Portland, Seattle, and New York can legally do what they’re doing. They have absolutely no obligation to provide police protection for their citizens. The left’s beloved anarcho-tyranny is not a violation of your rights. As my favorite constitutional law scholar Eugene Volokh told me last week, “The remedy for inadequate policing is political—retaliation against elected officials at the polls—and not legal.”

To put it bluntly, if your city wants to abandon you to the mob, from a legal perspective it can. It can defund and dissolve the police and keep you besieged in your home all night, and no federalized National Guard can save you. After all, it’s not like you’re some Arkansas black kid trying to go to school. You may feel like your rights are being violated, but there’s an important component missing.

Care to guess what it is?

I recently had the pleasure of discussing matters of public safety and the law with Paul Cassell, Ronald N. Boyce Presidential Professor of Criminal Law at the S.J. Quinney College of Law, University of Utah. Professor Cassell recommended that I take a long look at Elliot-Park v. Manglona. In that 2010 decision, the Ninth Circuit ruled that police cannot fail to pursue a case based on the race of the victim or the suspect.

In other words, you may not have a right to police protection, but if the state is failing to provide that protection based on race—if race factors into that deprivation—your rights are being violated, and you have a case. As the decision noted:

There is no right to state protection against madmen or criminals, but there is a constitutional right to have police services administered in a nondiscriminatory manner—a right that is violated when a state actor denies such protection to disfavored persons.

It all comes down to race. Back in April, ACLU national director “David Cole” (sorry for the scare quotes, but there can be only one) admitted that his organization is fine with all the COVID restrictions, as long as they don’t favor or disfavor any particular race. “All kinds of constitutional liberties are being constrained right now. They are restricted because there’s a reason to restrict them,” “Cole” told USA Today. But, “This is not the kind of threat that allows the government to scapegoat any particular minority or subset of our community. Measures have to be broad-based.”

We all know that the ACLU doesn’t give a damn about white rights, but that aside, “Cole” articulates an important point: The state can get away with tormenting its citizens, or allowing its citizens to be tormented, to a massive degree, as long as the torment is broad-based and not racially discriminatory.

The BLM terrorists have not hidden the racial nature of their targeted riots. Indeed, they’re proud of it. BLM leader Melina Abdullah boasted to the L.A. Times that BLM “wanted to go to places of white affluence” in order to bring “pain” to those communities. And leftist mayors and neutered police chiefs are not providing aid to the victims of this race-based violence. Police departments all over Southern California were ordered to stand down and allow majority white areas to be trashed by rioters who were by their own admission targeting those areas for reasons of race. And while the Beverly Hills PD (and our mayor) stopped the residential raids cold, L.A. County politicians have promised to fight against the city’s protection of its residents.

Now, you folks can sit back like dicks and laugh at the plight of the whites in those areas (hyuk hyuk them liberal Hollywood jerks is gettin’ whut they deserve!), or you can be smart for once and realize that if this lunacy isn’t stopped in its infancy, it’ll soon be coming for you, wherever you live.

The problem is, if BLM is to be fought using anti-discrimination statutes and case law, that means white folks will have to use race-conscious legal arguments, just as nonwhites do. But decades of indoctrination have made white Americans reluctant to pursue any cause—even their own safety and well-being—in the name of their race.

But that may be the only way out. Whites have lost the luxury of being color-blind. There are laws on the books that can protect whites from BLM (and any other group that engages in specifically antiwhite violence), but only if whites seek protection as whites.

That’s a fine irony: “Anti-racist” groups like BLM may be forcing whites to become more racially conscious, as a defensive measure. In the end, BLM might be undone by the overtly racial nature of its brutal and merciless tactics.

As good an example of evil sowing the seeds of its own destruction as I’ve ever seen.