The War Against Instinct 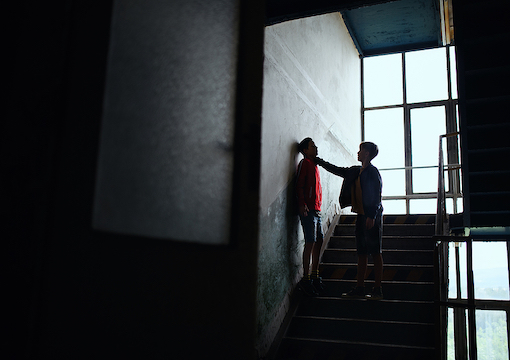 This week, I’m goin’ anecdotal. A little less “facts and figures” and a little more “Mark Twain after three whiskeys.”

Here’s the story of Little Robert and the Crip.

Little Robert (so nicknamed because I had another, taller friend named Robert) was a fat kid who lived up the street from me. He was almost three years my junior, and I, as an only child, pretty much made him my honorary little brother, with all the abuse that goes with the title. Little Robert was white. Also Jewish, but you couldn’t tell. Especially as he wasn’t terribly sharp.

I’ve written of this before, so forgive me for repeating myself, but my high school wasn’t supposed to be 85% black. It had been built to draw equally from the white/Jewish Westside, and the (at the time) black areas south and east of me (today those neighborhoods are largely gentrified white/Asian). In theory, the school should’ve been 50/50. But in practice, the Westsiders sent their kids to private schools. Thus, each year the school got blacker leading to more white parents opting out leading to the school getting blacker etc., etc.

Me? I was offered the private school option—my folks had saved up for it—but I turned it down. In part because I never learned a damn thing in school so for me the point of the entire exercise was to fuck off with friends and try to get laid, and that was, simply put, easier to do in a school with lax standards. Also, with so few white boys in the mix, my odds of scoring with the small population of white girls improved dramatically. And finally, in general I prefer an environment in which I can be the one-eyed king of the blind (i.e., where I can excel more with half the effort).

We all got along great. The Crips loved me because every day I’d entertain them with new jokes about “faggots,” “chinks,” and “beaners” (first rule of comedy: Know the room). I was friends with everybody—one of the few whites ever voted “best actor” in the yearbook—and everybody was friends with me.

Little Robert’s divorced parents were not about to spend good money to send their corpulent lump to a private academy. The year I was a senior, Robert started as a freshman. Prior to his first day at Inner City High starring Don Cheadle, I had a talk with him, knowing that he was not the most socially adroit fella on the block. I explained that by and large it’s a good school and everyone gets on well. This was 1985; there was no “critical race theory,” no institutionalized antiwhite hatred. I never saw it in six years of attending majority-black schools.

But there were predators. That’s what I was most worried about in Robert’s case. I warned him that there’ll be a percentage, not huge but not minute, of black students who’ll see him as prey. It’s nothing personal; they see white and they see money. Most of the students mean no harm, but the ones who do mean harm mean more harm to whites because of the perceived profitability in targeting them.

Just don’t put yourself in a position of vulnerability, I told Robert. You give them an opportunity, they’ll take it. Most important, I added, don’t let your Jewish Westside liberalism and a childhood of 1970s “buy the world a Coke” kumbaya bullshit make you feel guilty about being vigilant. There will be a part of you, I cautioned, that will resist suspecting these kids of ill intent. They know that, and they’ll use it as an edge.

My lecture laid an egg. Robert’s fat frowny face contorted into a caricature of disapproval. He called my advice racist, and said he’d hear no more of it.

Three weeks into the school year, Little Robert came running up to me at lunch, his jowls jiggling with excitement. He was gonna buy a scooter! Robert was too young for a car learner’s permit, but under L.A. regs at the time, he could ride a motor scooter. This would allow him the independence of travel, so important in those pre-Uber days. He’d been saving his allowance for just this occasion.

“Captain told me that if I bring $80 to the alley behind Bob’s Market, he’ll give me a scooter!”

“Captain,” as he called himself, was a hardcore Crip soldier. That was no open secret, as it was no secret at all. He was an inveterate criminal. And the “alley behind Bob’s Market” was (at the time) Crip central. Even the LAPD battering ram was scared to venture there.

As an aside, I frequently take out-of-town guests to that alley today, gentrified and as pretty and safe as a Reykjavik suburb, to demonstrate that not all recent California demographic changes have been for the worst.

I put my hand on Little Robert’s shoulder: “Lardass, Captain is not going to sell you a scooter. He simply isn’t. He’s going to take your money and walk away laughing. This is exactly what I was trying to warn you about.”

“There will be a part of you, I cautioned, that will resist suspecting these kids of ill intent. They know that, and they’ll use it as an edge.”

I’ll never forget the sight…Robert’s doughy cheeks grew red as a baboon’s ass, his pudgy nostrils flared with rage. “You…you RACIST!” he screamed. “You fucking RACIST BASTARD! Just because Captain is black, you think he wants to rob me.”

“Well, that and the fact that he’s a gangbanger, yes,” I replied. “You will be robbed. Captain and I get along fine, but only because I keep him at arm’s length, as should you. Be friendly, sure. But don’t hand him a knife and outstretch your throat.”

“Tubbo, you’re walking right into the very trap I cautioned you against.”

Robert was literally hissing, spitting at that point. He backed away, cursing me as he fled: “You RACIST piece of shit! Damn you! Damn you!”

I thought little of it for the rest of the day. After school, my friends and I were gathered at my house as usual when my phone rang. It was Little Robert from a payphone outside Bob’s Market.

Blimpy was being overdramatic, of course. But they had kicked the living snot out of him. Captain, backed by about seven of his lieutenants, had grabbed the cash and said, “Now get the fuck outta here, white boy,” and Robert had dared to protest. So they beat him mercilessly. The poor schmuck not only thought he could deal fairly with those hoods, but that he could lodge a complaint when the deal went south.

My friends and I drove to the market to collect the battered boy. The thugs had mainly worked the ribs. They’d also taken great pleasure in humiliating him by kicking his rear end and privates. The only visible blood was on his ear; they’d torn his earring out, severing the lobe.

We took him to the ER. Thankfully, there was no major internal damage.

Little Robert became a changed man after that. And we became closer friends, which likely had something to do with the fact that instead of feeding him “we all bleed red” bullshit, I’d actually tried to save him from that beating. He dropped out of high school and got his GED, and he started working out with weights like a madman. Soon enough, he’d gone from the fat kid I was ashamed to be seen with to the hunk I was jealous of because when we’d hang out all the women would stare at him, not me.

And he became a cop. In Inglewood (still one of our few remaining black areas). He rose to the rank of detective, and was many times decorated for bravery. He saved the lives of several black miscreants, never for a moment using his badge as an excuse to take revenge for what had been done to him as a child. But—and this is the important part—he did well at the job, he stayed safe and kept others safe, because he never forgot the lesson of that day in 1985: Let not your vision be clouded nor your alertness impeded by the clichés and platitudes of the white-guilt Pied Pipers who’ve sent so many to the grave with their murderous melodies about how situational awareness equals racist oppression.

It’s not by chance that Little Robert’s story is on my mind. Christine Englehardt is the 24-year-old white woman who was drugged, raped, and murdered by two black “spring breakers” in Miami last week. Englehardt apparently met the two men earlier that night at a restaurant. At some point, they gave her a “green pill” and accompanied her back to her hotel. After repeatedly raping her and leaving her for dead, the two noble 1619ers went on a spending spree with her wallet.

As has been noted in the press, Englehardt frequently posted on social media about how women must always be on guard against “predators.” Indeed, her final Facebook post reads, “Always go with your gut. Please be on alert for any suspicious people or cars. This is a dangerous world now unfortunately and you never know what anyone’s true intentions are.”

Yet that lesson was forgotten in the presence of two black guys who, by all photos and video, certainly “present” as thuggish.

In 2016, Englehardt’s heavily white Bucks County high school was embroiled in a scandal over “bathroom swastikas” supposedly scrawled by “MAGAs” to harass black and Latino students. No culprit was ever found (like most swastika sagas, this one was likely a hoax), but the school district forced all students and staff to go through “diversity training” anyway.

Englehardt’s understanding of “stranger danger” was almost certainly mitigated by “black stranger? No danger!” brainwashing. Why she put herself in such peril that night in Miami we may never know, and the press isn’t gonna help us find out (The Daily Beast ignored the story in favor of a lengthy “doxxing” exposé of a white spring breaker who dressed as the Joker and yelled, “Covid is over”). Deep down, Englehardt seemed to instinctively know not to put herself in a position of such vulnerability, and yet something, someone made her ignore those instincts when it mattered.

Little Robert got lucky that day in 1985. And I got lucky that there was no social media where he could vent his anger at my “racist” advice. Today, a kid would be canceled for stating the plain truth as I did.

All the more reason that truth need still be spoken. There are people—uncompromisingly malevolent and hate-filled people—actively working to dull the healthy instincts that exist to keep Little Robert out of that alley and Christine Englehardt out of that restaurant.

Let’s not make it easy for ’em.