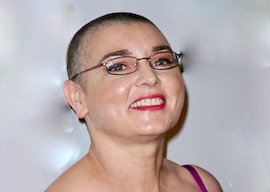 The Week’s Most Squirmy, Wormy, and Germy Headlines

SINEAD O’CONNOR IS NOW ISLAM’S PROBLEM
Sinead O’Connor is a mentally ill bag o’ postmenopausal bones whose chief achievement is having a weird first name that reminds people of the word “skinhead.”

For a fleeting moment she was a famous singer, but fame popped the cork on her psychosis, and ever since she’s been ambling around oozing craziness like so much champagne foam.

In a self-serving gesture of very public compassion, subzero-IQ British comic Russell Brand offered her a comment of public support on YouTube, which had O’Connor desperately pleading for him to stick his hee-hee in her ha-ha:

Could also do with a jolly good rogering, frankly. The last man who touched my body took out my reproductive system two years ago. So if you really wanna be part of my healing journey, c’mon, horse it into me, boss.

A year later, despondent that no one from the West has proved willing to rape her, Sinead O’Connor has converted to Islam. With her Twitter profile’s avatar now a Nike swoosh with the phrase “WEAR A HIJAB…JUST DO IT,” she has tweeted a picture of herself wearing one of those Islamic tablecloths around her head. Apparently she didn’t get the memo that you’re supposed to cover your face with those things.

Immune to shame, O’Connor boasted that her latest journey into the snake pit inside her skull has led her to embrace Mohammedanism:

This is to announce that I am proud to have become a Muslim. This is the natural conclusion of any intelligent theologian’s journey. All scripture study leads to Islam. Which makes all other scriptures redundant. I will be given (another) new name. It will be Shuhada

The name “Shahuda” means “martyr” in Arabic, but in any other language it means “psycho.”

In good news for the global umma but bad news for everyone else, the European Court of Human Rights has ruled that free speech must take a backseat to the noble cause of protecting Muslims’ feelings. In fact, they even used the word “feelings” in their ruling.

Reviewing a 2009 case in which an Austrian woman allegedly “defamed” the Holy Prophet during two public seminars, the court said that saying not-so-nice things about a schizophrenic pedophile warlord who’s been dead for over 1,300 years “goes beyond the permissible limits of an objective debate” and “could stir up prejudice and put at risk religious peace.”

“Despondent that no one from the West has proved willing to rape her, Sinead O’Connor has converted to Islam.”

In the struggle to balance the “right to freedom of expression with the right of others to have their religious feelings protected,” the court found that native Europeans need to shut their pale pink infidel mouths if they don’t want be decapitated or tossed off buildings or stoned to death.

Apparently seeking to pave a yellow brick road from the Middle East into Europe, the UN Human Rights Committee ruled last week that France’s niqab ban unjustly hurts the feelings and blithely stampedes over the rights of Muslim women to walk around bumping into things because they’re basically dressed like Cousin It from The Addams Family.

Do we need to hit Europe over the head with a baseball bat before it wakes up?

IDENTICAL TWINS SUFFER FROM IDENTICAL DELUSION
It’s a glowing testament to the human spirit, to the brotherhood of man, to the concept of a transcendent eternal soul, to the idea that we’re all in this together, to the notion that our so-called “differences” are only superficial, and to the fact that the world has gone out of its flippin’ gourd that a pair of teenage sisters can decide they’re men, have their boobs sawed off, and they’ll get a glowing profile in a major newspaper.

The Guardian is spotlighting 23-year-old identical twins Jack and Jace Grafe, who were born Jaclyn and Jennifer Grace until they decided that being girls wasn’t hip and cool and trendy and progressive and cutting-edge and edgy enough.

Born in Baltimore to a Christian pastor, the sisters both claim that as children, they cried themselves to sleep wishing they’d wake up as boys, but due to our oppressive and bigoted Nazi Industrial Media-Educational Complex, they were even afraid to admit it to each other.

Then, at age 16, they both decided they were gay, which, if aberrant sexual identities could be compared to illicit intoxicants, would be marijuana—a gateway drug at best. Then at 18, they moved onto mainlining the harder stuff when they decided they were both dudes. They had their boobs sawed off and even posed for pictures with their chests all bandaged up—those pictures are featured in that Guardian profile above, which we would urge you not to click on lest you wish to stab out your eyeballs with knitting needles.

Being “transgender” is extremely rare statistically—an estimated six in every thousand Americans suffers from the mental disorder known as gender dysphoria. An even tinier quotient of people are born as identical twins. When it comes to statistically improbable freakiness, these two daffy dames won the Lotto.

Prior to the #MeToo movement, Kelly shot to fame after pretending to be offended by the false idea that Donald Trump made a vulgar reference to her menstrual blood. She then left Fox News and got a cushy job at NBC making approximately 800 billion dollars a year merely by being a blonde woman with an IQ over 80.

Here are the comments from her show last Tuesday that got her crushed like a pretty li’l white bug:

But what is racist? You truly do get in trouble if you are a white person who puts on blackface at Halloween or a black person who puts on whiteface for Halloween. Back when I was a kid, that was OK, as long as you were dressing up as like a character.

If one were to play a game of “Find the Factual Error” with those statements, one would come up empty every time.

She didn’t say she hated black people. She didn’t say she found blackface to be hilarious. She didn’t even hint that sometimes at home alone in her Manhattan condo, she smears herself with black clown greasepaint, takes selfies, and sends them to all of her racist blonde friends. She merely stated that when she was a kid, a nationally famous TV personality couldn’t be fired for stating the truth about blackface.

The next day on her show, Kelly groveled, condemned the “history of blackface being used in awful ways by racists in this country,” and said she had no desire to add to the climate of “pain and offense” in which the nation currently writhes and flails. She also sat dutifully silent as two rude and uppity black journalists chastised her on her own freakin’ program.

But none of it mattered. She is no longer welcome at NBC. Fortunately, we’ve heard through the grapevine that the Daily Stormer is looking for freelance bloggers.

He recently profiled the dilemma of a black family whose 16-year-old daughter has the typically wacky black name of Treasure. Her mother Monique says that Treasure started having “issues with her race” at the tenderly chocolatey age of five:

She wouldn’t play with the black children. Treasure would mangle or destroy her black dolls. She would cut their heads off, pull off their arms. She would pretend that they were the white dolls’ slaves….My daughter is a racist against her own race….If you ask me, my 16-year-old daughter has a very out-of-control identity crisis. She truly believes she’s white.

Treasure confirms everything her wailin’ mama says and even takes it up a notch:

I’m white. I’m a Caucasian because everything about me is different from an African-American… When it comes to black people, I think they’re all ugly, and I have nothing in common with them… White people act and think just way more mature than African-Americans. Black people, they think in a criminal way… They’re really dangerous. If an African-American is on the same street as I am, I’ll cross the street to avoid their chaotic, thuggish ways.…African-Americans are loud, rude, obnoxious and just altogether fat and ugly.

In the tragic event that Vice President Mike Pence will no longer be with us in the year 2020, may we suggest this young lady as Donald Trump’s running mate?

POPE COMPARES POPULISM TO HITLER
Does anyone else get the feeling that Pope Francis should shut up about politics and wash more refugees’ feet instead? Everything out of his mouth these days suggests he’s a cyborg invented by tiny Chinese scientists receiving hush money from the Trilateral Commission.

The Pontiff recently referred to populism—which, as everyone knows, is any people’s movement that hasn’t been arranged and financed by leftist elites—led to Hitler and World War II and the savage execution of an estimated 666 gorillion sons and daughters of Abraham.

It’s time for this guy to bow out gracefully. What the world needs now is the papal equivalent of Donald Trump.

TRUMP: “I’M A NATIONALIST”
Speaking of Donald Trump, during his stunningly impressive and frankly aphrodisiacal presidential campaign, he terrified the human monstrosities who rule the world when he bemoaned “the false song of globalism.”

Now he’s finally come out of the global closet and confirmed that he is a globalist’s worst enemy—a nationalist.  Speaking before yet another roaring crowd in Houston, Trump stood like a priapic rooster at the podium and declared:

And this, dear cuddly readers, is why the Powers That Be seek to destroy him with the ferocity of neutered and bleeding ferrets. It has nothing to do with silly fluffy words such as racism or sexism or Islamophobia—it’s because he’s a nationalist.