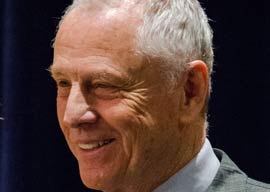 The Week’s Most Grueling, Mewling, and Befooling Headlines

TROUBLE AT THE POVERTY PALACE
The Southern Poverty Law Center is misnamed for the following reasons:

1) SOUTHERN: Despite the fact that its headquarters are located in Alabama, it is aggressively anti-Southern by dint of the fact that it views Southern history as one giant stain against all things good;
2) POVERTY: Its endowment is close to a half-billion dollars, dwarfing that of the NRA and even the ACLU;
3) LAW: It is very selective in what laws it deems worthy of defending: For example, it equates the enforcement of current immigration laws with “hate.”

Despite its relentless posturing as an anti-“hate” organization, it seems propelled by a cancerous hatred toward all things white and male. And most disturbingly for anyone who believes that objective journalism is not only desirable but somewhat achievable, the mainstream press unquestioningly reprints SPLC press releases as if they were gospel truth. The SPLC also advises huge tech companies on exactly what constitutes “hate” and why it should be banned.

But despite its leaders’ savviness regarding how to make millions by exploiting modern taboos, they seem unaware that there is no end to “social justice” and that merely by having light skin and being male, their own witch-hunting would ultimately turn the witches on them, too.

On March 13, the SPLC—which has been linked to at least two terrorist shootings—announced that it had fired its co-founder Morris Dees, a lawyer and direct-marketing millionaire who once campaigned on behalf of George Wallace and received money from the KKK to defend people who’d assaulted Freedom Riders at a bus station in Montgomery, AL. It would also surprise the SPLC’s seemingly endless pool of gullible donors to learn that as recently as 1994, Dees—by then a multi-millionaire—claimed, “probably the most discriminated people in America today are white men when it comes to jobs.”

According to Dees’s divorce papers, his stepdaughter Holly accused him of trying to molest her with a sex toy when she was 18:

One day after Dees was fired, the Los Angeles Times reported that two dozen SPLC staffers had signed a letter protesting “mistreatment, sexual harassment, gender discrimination, and racism” at the organization. Hilarious!

On Friday, SPLC president Richard Cohen resigned his position “in order to give the organization the best chance to heal.”

Last Wednesday—published before Cohen’s resignation and possibly a contributing factor to it—the New Yorker ran an essay by former SPLC staffer Bob Moser that did a bang-up job of shaming the shamers at their own shame game:

For those of us who’ve worked in the Poverty Palace, putting it all into perspective isn’t easy, even to ourselves. We were working with a group of dedicated and talented people, fighting all kinds of good fights, making life miserable for the bad guys. And yet, all the time, dark shadows hung over everything: the racial and gender disparities, the whispers about sexual harassment, the abuses that stemmed from the top-down management, and the guilt you couldn’t help feeling about the legions of donors who believed that their money was being used, faithfully and well, to do the Lord’s work in the heart of Dixie. We were part of the con, and we knew it.

Incoming female staffers were additionally warned by their new colleagues about Dees’s reputation for hitting on young women….The work could be meaningful and gratifying. But it was hard, for many of us, not to feel like we’d become pawns in what was, in many respects, a highly profitable scam….

Outside of work, we spent a lot of time drinking and dishing in Montgomery bars and restaurants about the oppressive security regime, the hyperbolic fund-raising appeals, and the fact that, though the center claimed to be effective in fighting extremism, “hate” always continued to be on the rise, more dangerous than ever, with each year’s report on hate groups. “The S.P.L.C.—making hate pay,” we’d say.

We pray for the day when, due to the relentlessly reduction ad absurdum nature of the “social justice” biz, the only person left working at the SPLC is a cancer-stricken, one-limbed, polysexual transgender mulatto Jewish dwarf infected with all known strains of HIV. Then, and only then, will justice roll down like waters and righteousness like a mighty stream.

BARACK OBAMA’S BROTHER ASKS IF MICHELLE IS A TRANNY
It’s truly none of our business whether or not Barack Obama and Rahm Emanuel used to frequent a gay bath house in Chicago, nor should it matter to use whether or not his alleged wife Michelle is actually a man.

Regarding the latter contention, Joan Rivers floated the idea that Michelle is a man, and according to Alex Jones, she may have been murdered by Michelle for spilling the beans.

“A course called ‘American Political Thought’ at the University of Colorado purposely ignores every white male who ever had a political thought.”

Now comes word that Obama’s half-brother Malik—who wears a MAGA hat, once promised that Barack would “be a good president for the Jewish people, despite his Muslim background,” and in 2017 tweeted an image of what is reputedly Barack Obama’s real birth certificate from Kenya—asked the following pointed question on Twitter:

We have no desire to examine Ms. Obama’s genitals for a definitive answer. All we know is that Barack Obama has referred to her as “Michael” at least twice.

BARBARA STREISAND: MICHAEL JACKSON’S “SEXUAL NEEDS WERE HIS SEXUAL NEEDS”
Barbra “The Anteater” Streisand, recently released from her cryogenic chamber while it receives a spring cleaning,defended dead King of Pop Michael Jackson not specifically against sexual abuse allegations, but about whether what he was accused of doing was bad. Interesting angle there, Babs.

In an interview with The Times, the chanteuse who has a bigger proboscis than any other female singer in history said that his accusers are “absolutely” telling the truth, but what’s the big dillio?:

His sexual needs were his sexual needs, coming from whatever childhood he has or whatever DNA he has. You can say ‘molested,’ but those children, as you heard say, they were thrilled to be there. They both married and they both have children, so it didn’t kill them….I feel bad for the children. I feel bad for him. I blame, I guess, the parents, who would allow their children to sleep with him. Why would Michael need these little children dressed like him and in the shoes and the dancing and the hats?

Wait a minute—the hats? We didn’t know about the hats. He’s lucky he died when he did, because if we’d known about the hats, we would have killed him.

BLACK SEMINARIANS AT PRINCETON SEEK REPARATIONS
We’re not certain whether or not Princeton Theological Seminary uses the same racial handicapping system regarding admissions as Princeton University does, but if so, black students they are already rewarded 280 SAT bonus points compared to Asians and 230 points vis-à-vis whites.

Still, obviously much more needs to be done and countless more boatloads of dollars need to be spent if we ever hope to see black students and Asian students reaching intellectual parity at Princeton—or anywhere else, for that matter. (A recent racial scandal erupted when it was revealed that New York City’s most elite high school, operating on a merit-based system regarding student selection, is 74% Asian and only 1% black.)

Black students at Princeton Theological Seminary, alarmed to learn that since Princeton was founded long before the Civil War and some of its benefactors owned slaves way back then, are demanding that the school set aside over $5 million yearly to help “make amends” for things that happened at least 154 years ago.

Prediction: They could toss $10 trillion yearly on scholarships for blacks, and 154 years from now, Asian students would outperform them to the same degree that blacks currently outperform Asians in the NBA.

Another prediction: Within 154 years, Asian scientists will be able to graft detachable and machine-washable 10-foot legs onto Asian humans, enabling them to outperform blacks in the NBA.

WHITE MEN REMOVED FROM “AMERICAN POLITICAL THOUGHT” SYLLABUS
Imagine teaching a course on “German Folklore” that excludes German folklorists. Or picture a class on “Lesbian Flemish Painters” that covered everything but lesbians, Flemish people, and painters.

A course called “American Political Thought” at the University of Colorado purposely ignores every white male who ever had a political thought. According to the syllabus provided by instructor Chad Shomura—who is possibly male but is definitely not white:

This course aims to develop an understanding of American political life from the margins. Rather than surveying traditional figures of American political thought, it attends to historically marginalized voices at the crossings of race, gender, sexuality, and nation. It explores issues such as intersectionality, antiblack racism and the American Dream, ordinary life, borderlands and migration, public feelings, mental health, and settler colonialism. The materials we examine also exceed the usual genres of American Political Thought. They include, among other things, poems, an ethnography, academic articles, a novel, and a hacked tarot card set.

There is no mention of the Founding Fathers or any of the presidents, at least not all the white ones.

It’s obvious that white males need to secede from America.