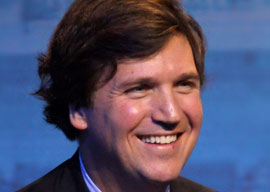 The Week’s Most Terse, Diverse, and Perverse Headlines

TUCKER CARLSON QUESTIONS DIVERSITY
Anyone who understands what words mean realizes that diversity doesn’t signify strength; instead, it sows division. Still, most people are dumb enough that they only need to be clubbed in the head with a nonsensical phrase a few dozen times before they internalize it and it makes perfect sense to them.

The only positive thing that diversity has ever brought America is a wider selection of restaurants. Otherwise, it’s brought a gaping dark canyon of conflict and alienation.

Tucker Carlson of Fox News is probably the only honest living American newscaster—so honest, it’s a wonder he’s still employed, much less alive. He recently showed footage from a chattering quartet of progressive battering rams—Bernie Sanders, Barack Obama, Hillary Clinton, and Joe Biden—squeaking loudly about how diversity is our strength without providing any, you know, corroborating evidence to support such a claim.

Mr. Carlson’s crime was to ask for evidence:

How precisely is diversity our strength? Since you’ve made this our new national motto, please be specific as you explain it. Can you think, for example, of other institutions such as, I don’t know, marriage or military units in which the less people have in common, the more cohesive they are? Do you get along better with your neighbors or your co-workers if you can’t understand each other or share no common values? Please be honest as you answer this question. And if diversity is our strength, why is it okay for the rest of us to surrender to one of our central rights, freedom of speech, to just a handful of tech monopolies?

The answer is obvious: Tucker Carlson is a racist.

STUDY: OVER HALF OF TEEN TRANNY BOYS HAVE ATTEMPTED TO “TRANSITION” INTO SUICIDE VICTIMS
Transgenderism is a perfectly natural and 100% sane phenomenon whereby people who were given the wrong gender card at birth by a bumbling worker on the baby assembly line shed their false identity through an insanely expensive regimen of hormone injections and genital butchery. If you think there’s anything crazy about that, tag—you’re the crazy one.

A new study released by the American Academy of Pediatrics—which, we presume, employs adults to study children, which is a little weird when you think about it—called “Transgender Adolescent Suicide Behavior” reviewed 120,000 adolescents age 11 to 19 over a three-year period. If teen suicide were the Kentucky Derby, “transgender males”—which we’re going to assume means boys who think they’re girls, although this nonsense gets so complicated we’re not married to this assumption—would win the race by a dozen lengths.

A staggering 51% of transgender males reported that they’d attempted suicide at least once. The runners-up at 42% were “nonbinary” teens, which basically means teens who don’t know what they hell gender they are. These sad, confused souls often call themselves “genderqueer,” a term that makes us want to puke every time we hear it.

Three in ten adolescent “transgender females,” which we will assume are adolescent girls who hope to one day have a surgical penis stapled onto their crotches, report at least one suicide attempt.

Shockingly, only 18% of normal adolescent females and 10 percent of normal males reported suicide attempts. If you don’t understand what “normal” means, check any dictionary that was published ten or more years ago.

But why are all these transtesticles and genderqueens and those with indeterminate genital lumps killing themselves at such a clip?

“The answer is obvious: Tucker Carlson is a racist.”

Surely it’s normal people’s fault. The fact that normal teen males have a suicide-attempt rate a mere one-fifth that of teen males who think they’re teen females is proof that normal males are successfully projecting their own deep-seated feelings of inadequacy and self-loathing onto tranny males, who are pure of soul and clean of mind and only kill themselves because they’re not nearly as wicked as normal people.

Confirming the modern dogma that queer lifestyles are healthy, a recent study from Oregon State University found that “Young people who identify as lesbian, gay or bisexual…reported nearly three times more substance use than heterosexual youth.”

TWITTER CLASSIFIES THE PHRASE “ILLEGAL ALIEN” AS “HATE SPEECH”
The term “illegal alien” has a legal meaning and is used by the US Supreme Court and the federal government. The term “alien,” not “immigrant,” is defined thusly in the US Legal Code:

The term “alien” means any person not a citizen or national of the United States.

Therefore, “illegal alien” is an emotion-free and technically accurate term to describe someone who is not a US citizen and has broken the law by overstaying the terms of their visa—or not bothering to get a visa in the first place.

But according to the bearded soy-birds of Twitter, the term “illegal alien” constitutes “hate speech,” which is why they recently rejected four ads from the Center for Immigration Studies that contained the phrase.

Twisting a factual statement into a matter of “hate” is an alien concept to us. It really should be illegal.

UK POLICE URGE CITIZENS TO SNITCH ON NEIGHBORS FOR “OFFENSIVE OR INSULTING” SPEECH
Because it’s exhaustive, tiresome, and racist to keep investigating whether or not Muslim grooming gangs continue to rape and pimp out young white English girls by the thousands, police in South Yorkshire are encouraging citizens to report other citizens for being mean and insensitive:

In addition to reporting hate crime, please report non-crime hate incidents, which can include things like offensive or insulting comments, online, in person or in writing. Hate will not be tolerated in South Yorkshire. Report it and put a stop to it.

Roughly nine people a day are being arrested by British officials for the crime of posting “offensive messages online.”

This is certainly not the country that ruled the planet a century ago.

CRIPPLED LESBIAN ALLOWED TO MARRY DEAD PARTNER
A 74-year-old lesbian—which is rare, because they usually kill themselves or die of mouth cancer long before that age—claims that she is “numb with happiness” over the fact that a judge in Salt Lake City recently declared that she was legally married to a woman she’d been digging clams with since the late 1960s.

The only hitch in the whole story is that Bonnie Foerster, the woman who is numb with happiness, lost her 82-year-old partner Beverly Groissant this past May when Groissant was sucked up into the clouds by the Great Lesbian in the Sky.

That’s right—a judge in Utah recently declared that Bonnie Foerster—who has two hideous giant lumps from where her legs were cut off at the knees—is legally married to a dead woman.

We knew lesbians did weird things, but this really takes the cake.

WOMAN ALLEGEDLY RIPS OUT MAN’S COLOSTOMY BAG OVER FAILURE TO PAY FOR EXORCISM
Fifty-six-year-old Bertha Ocejo of Tulare County, CA, appears to be a highly troubled woman. She had allegedly threatened to kill a 70-year-old unnamed man so many times that he filed an emergency protective order against her.

As everyone knows, you should never get a restraining order against a crazy person. It’s like pulling on a wild pig’s tail. They only get more upset.

As the story goes, Ocejo, despite the protective order, recently visited the man’s house claiming that she was demon-possessed and demanding that the man fund a $5,000 journey to Mexico for a right proper exorcism. When the man refused, Ocejo reputedly pitched a fit and ripped out his colostomy bag from his body, which sounds intensely unpleasant and messy. According to deputies, she “also shattered windows at the home, attempted to strike the man with an iron and struck him with her feet and hands.”

But despite the man’s protective order, Ocejo was not charged with any crime because we obviously live in a patriarchy. If a man had ripped out an elderly woman’s colostomy bag while she had a protective order against him, we’re sure that not only would he have walked, he’d have been given a big shiny nickel, too.

PAUL MCCARTNEY: THE SONG WAS “HEY JUDE,” NOT “HEY JEW”
The Beatles were a pop phenomenon who morphed through several changes from 1964-1970 that included drug use, transcendental meditation, and beards, but if you were hoping that at least one of their many phases involved a dash of anti-Semitism, you can keep looking.

One of the band’s most enduringly annoying songs is Paul McCartney’s “Hey Jude,” which involves the aggressively superficial Beatle chanting the idiotic phrase “Na na na na, Hey Jude” for what seems like eighteen hours.

In a recent interview, McCartney clarified that “Jude” was not intended to target Jews. Instead, he wrote the song to John Lennon’s son Julian as a way to say, “Don’t worry, everyone knows your daddy is a bitter asshole, but things will get better.” McCartney was originally going to call the song “Hey Jules” but decided on “Jude” instead.

When The Beatles opened their short-lived Apple Boutique in London in the late 1960s, McCartney and his girlfriend painted “Hey Jude/Revolution” in white paint on the store’s windows.

Angry Jews in London, still haunted by chants of “Juden raus” (Jews get out) from the Nazis, were certain that The Beatles were urging another Holocaust. According to the unreasonably popular moptop:

I didn’t realize it meant Jewish. Actually I nearly got into trouble, because we put it up on a window of our shop…so that people going by on the buses would see….I got this furious phone call from this guy, Mr.Leon, who was Jewish, he said: ‘What are you doing, how dare you do this?’…[I said] no, no, no, wait a minute, I swear to you it’s nothing like that… cool it down, it has nothing to do with that, you’ll hear when you hear the record. It’s just a name in a song.

Angry Jews wound up smashing the Apple Boutique’s windows anyway. As it turns out, the Jews didn’t like The Beatles, which is another thing to admire about the Jews.