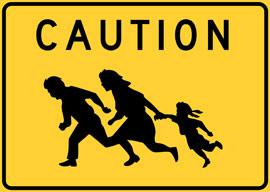 The Week’s Most Mundane, Inane, and Arcane Headlines

TWICE AS MANY ILLEGALS IN USA AS PREVIOUSLY THOUGHT
For the longest time—almost since Speedy Gonzales and the Frito Bandito ruled American pop culture—we’ve been hearing that there are a dozen million illegal Mexicans—sorry, undocumented migrants—picking lettuce and spreading intestinal parasites throughout our whitebread-and-mayo land.

We were told that this is nothing to be alarmed about, because normal average lazy fat entitled bigoted dying Americans don’t especially like to pick lettuce or spread intestinal parasites, and if we didn’t want a head of iceberg to cost 100,000 dollars, we should be happy that 44 million people in the USA don’t speak English at home, because English is the language of slavery and colonialism and it’s what the KKK spoke and it’s also what Adolf Hitler would have spoken if he had been born in England.

We were expected to believe the tally of 12 million undocumented immigrants as a fixed and immutable and unchanging number, because we’re all well aware that these people don’t like to breed, and they especially don’t like to shoot out a dozen kids like cannonballs and then stuff them all into a motel room with the rest of their extended family.

According to a new study by three Yale-affiliated researchers, there is a 95% probability that the likely number of illegal, tax-grubbing, tuberculosis-hacking, baby-squeezing, Anglo-despising illegal Mexicans in the USA hovers somewhere on the thin line between 16 and 19 million, with the mean population estimated at 22 million—in other words, almost twice what they’ve been telling us.

According to researcher Edward Kaplan, at first he thought they’d find a total much lower than 12 million:

Our original idea was just to do a sanity check on the existing number. Instead of a number which was smaller, we got a number that was 50% higher. That caused us to scratch our heads….The analysis we’ve done can be thought of as estimating the size of a hidden population. People who are undocumented immigrants are not walking around with labels on their foreheads.…Yet for policy, it is very important to know the size of these hidden populations because that sets the scale of the problem in each of these different policy areas.

Kaplan actually sees an upside to it all: If there are twice the illegals, they’re only committing half the per-capita crime we thought they were! Hey, that sounds pretty wholesome, although one must assume that “being in the country illegally” is not considered a crime.

“Think of it as two burritos for the price of one.”

It’s not as if the hordes flooding in from Central and South America come from violent cultures or anything. Pay no attention to the fact that enough people have been murdered in South America since the year 2000 to wipe out the entire city of Chicago. It’s not as if 43 of the 50 cities on Earth with the highest murder rates are in Central and South America. And it’s definitely not as if El Salvador—who are mailing in our colorful friends from MS-13—has a murder rate almost 17 times higher than that of the USA.

In short, there’s nothing to worry about, you bigots. Think of it as two burritos for the price of one.

MARINE LE PEN ORDERED TO TAKE PSYCH EXAM
Marine Le Pen, the hot middle-aged blonde with nice firm jugs and a mischievous smirk who sought to reclaim France from the globalists, has been ordered to undergo psychiatric tests after tweeting graphic images of Islamic atrocities.

Her “crime” was to show an image of an Islamic beheading and to blame Daesh for it. “In other countries,” Le Pen griped, “this would have earned me a medal.” Instead, she was charged in March with “violent messages that incite terrorism and pornography or seriously harm human dignity.”

In other words, protesting terrorism is terrorism. And France is no longer France. Hasn’t been for a while.

COKEHEAD RODENTS, REJOICE: A CURE IS COMING
Are you a mouse with a cocaine problem? Or are you a coke fiend who wants to look cooler than all your friends by being able to snort a quarter-pound and not break a sweat?

We bring you glad tidings of great joy: Gene therapists in Chicago who thought it’d be fun to dose mice with massive amounts of pure-white blow have developed a stem-cell implant that releases an enzyme which neuters cocaine’s intoxicating effects and quickly flushes it from the body.

Researchers say they plan to develop similar implants for alcohol and opioid addiction in order to reestablish a functional and harmonious rodent society.

RISE OF THE GLUTEN-FREE EUCHARIST
Although Christianity is split into countless sects, to our knowledge the Roman Catholic Church is the only denomination that teaches the doctrine of transubstantiation, which means that when the priest consecrates the wine and wafer during Mass, they literally become the substantial blood and body of Jesus Christ—and if you don’t understand what “literally” means, turn away from “symbolically” and head in the other direction. Catholics teach that the what they call the “accidents” of the communion ceremony remain—in other words, yeah, it still looks like a wafer and, to be honest, it still tastes like wine—but be ye not fooled, because that is the literal flesh and blood of Jesus and it is no longer bread and wine.

Good thing for Catholics, then, that they don’t have to worry about gluten in their Eucharists, because it will become divine flesh anyway and you won’t have to worry about gluten OR wheat or any of that humanoid-diet nonsense. However, at St. Stephens Episcopal Church in Charleston, SC, communicants who have been scared out of their wits by the recent celiac panic can elect to take holy communion via an entirely gluten-free wafer. At the church, where there are about 170 attendees at any given time, a full five of them decide to be such difficult babies that they opt for the gluten-free eucharist.

It’s a good thing that their Savior wasn’t nearly so delicate.

A FOOD-STAMP STRIP CLUB CALLED SHARKY’S
One would think that a gentlemen’s club called Sharky’s tucked away in a flat, nondescript southwest corner of Ohio would have a pinch of class and razzmatazz and swank. Hate to shatter your caviar wishes and champagne dreams, but Sharky’s has jumped the shark.

After a five-month police investigation that ended in 2017, officials say they plied the ritzy adult female entertainers of Sharky’s with a grand total of $2,000 worth of food stamps in exchange for “heroin, fentanyl, carfentanil, cocaine, methamphetamine and lap dances.” We were wondering how the cops were able to stay awake for the lap dances after all those opiates until we realized that they would wisely buy some meth just prior to the dances.

But seriously, fellas—five months and only $2,000 of taxpayers’ dollars spent on debauchery? What kind of lightweights are you guys?

This is now the second strip joint in Harrison Township OH, to lose its liquor license in recent years after officials with the Ohio Investigative Unit came down on a place called the Harem in May of this year. As with Sharky’s, the Harem was located on North Dixie Drive.

Harrison Township, OH, sounds like more and more fun the more we read about it.

IS IT RACIST TO CALL KOREANS “FISHY”?
Andy Kim was the swarthy, sexy, sultry, smoky Canadian pop singer of Lebanese origin who thrilled the world with such 1970s dance hits as “Rock Me Gently” and others whose names escape us at the moment. But we’re not talking about that Andy Kim anyway.

The Andy Kim in question is a Korean American Democratic politician who is running for a U.S. House seat in southern New Jersey. Yes, he has slanty eyes, and yes, we assume he’s shorter than most males, and yes, according to the statistics, he very likely has a penis that is just a smidge under five inches—not that it’s any of your business.

The reason his race is now an issue is because his opponent, a white Republican named Tom MacArthur, recently issued an ad that shows raw fish heads and has the slogan “THERE’S SOMETHING REAL FISHY ABOUT ANDY KIM.” As proof that the MacArthur campaign used a “racist font” in the ad, a Democratic spokeswoman wrongly claimed that the font was called “Chop Suey,” but it was clearly not. This is what the Chop Suey font looks like. According to spokeslady Caitlin Mota, who from one glance appears to be a fat white woman with possible lesbian inclinations and at least three cats:

The GOP’s decision to show images of raw fish and to use this particular red block font, which is actually called ‘Chop Suey’ and has long been used to visually convey Asian heritage, makes it abundantly clear what this mailer is — a shameful racist attack on a qualified and capable public servant.

The MacArthur campaign countered that their man can’t be racist against Koreans because he has two Korean children even though his wife also looks white, so there’s a very remote possibility that he may have stolen the children in haste to appear less racist.

STUDY: ROBOTS TEACH THEMSELVES TO BE RACIST
Artificial intelligence experts from Wales and the USA have published a report which states that when robots split off into groups, they quickly learn to favor members of their own group at the expense of outsiders. Amazingly, a researcher concluded that this behavioral pattern was the result of “prejudice” rather than “pattern recognition”:

By running these simulations thousands and thousands of times over, we begin to get an understanding of how prejudice evolves and the conditions that promote or impede it…Our simulations show that prejudice is a powerful force of nature and through evolution, it can easily become incentivised in virtual populations, to the detriment of wider connectivity with others….Such widespread prejudice is hard to reverse.

Either that, or favoring your own kind is such a no-brainer, even robots do it without blinking.