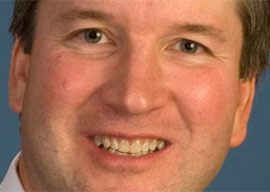 KAVANAUGH CONFIRMED TO SUPREME COURT
Despite the frenzied efforts of the Histrionic Left over the past few weeks to defame him as a serial gang rapist and possible baby-eater, Brett Kavanaugh was confirmed as a Supreme Court Justice on Saturday.

It would be horrible if this news were to bring much wailing, gnashing of teeth, shirt-rending, and even self-harming behavior among such academics as Dr. Carol Christine Fair, a witch-faced associate professor at Georgetown University who last week, amid all the swirling psychosis that led up to this happy ending, wished for the deaths of “entitled white men” with a sadistic fervor that is entirely unbecoming of an entitled Jewish lady:

Look at thus [sic] chorus of entitled white men justifying a serial rapist’s arrogated entitlement. All of them deserve miserable deaths while feminists laugh as they take their last gasps. Bonus: we castrate their corpses and feed them to swine? Yes.

The ironically named Fair allegedly hosts a blog where she doxes “sexist” men. On her Twitter bio—which is now absent from the site—she described herself as an “inter-sectional [sic] feminist, pitbull [sic] apostle, scotch [sic] devotee, nontheist, [sic] resister.” Her cover photo read, “DON’T GRAB MY PUSSY.” She also claims that her words are “intended to make you uncomfortable.”

Nothing makes us more uncomfortable than the idea that she has a vagina. And we doubt there is anyone in the solar system who wishes to grab it.

CLAPPING BANNED AT UNIVERSITY; “JAZZ HANDS” ENCOURAGED INSTEAD
The University of Manchester’s Students’ Union, in deference to the fact that people with autism and sensory disorders can suffer “triggering anxiety” at the sound of hands clapping, has taken the bold and compassionate move of banning the sadistic hate crime of clapping at all public students’ events.

It was also argued that clapping can trigger deaf people, and we’d be greatly amused to hear an explanation for how that’s even possible unless you’re clapping your hands on their heads.

The motion, titled “Making Senate More Accessible,” was authored by one Sara Khan, and at press time it remains unclear whether she is related to the angry Khan family from that 1982 Star Trek movie.

Instead of clapping when they approve of something a speaker has just uttered, students are now advised to do “jazz hands”—which is British Sign Language for clapping. (If you’re black, “jazz hands” is very similar to “hands up, don’t shoot!”) Instead of clapping, jazz hands are considered to be “a more inclusive form of expression.”

“You should only believe women when they’re telling the truth.”

These motions need at least a 66% vote of approval from students, so more than two-thirds of students gave their jazz hands to this inane proposal.

Khan—who may or may not have had her clitoris removed at birth—also wrote a motion urging “greater QTIPOC (Queer, Trans, and Intersex People of Colour) inclusion and advocacy.”

Wait just a gosh-darned minute—what are people named “Khan” doing in England in the first place?

ITALIAN MAYOR BUSTED FOR AIDING ILLEGAL IMMIGRATION
Domenico “Mimmo” Lucano is the mayor of the small southern Italian town of Riace. He’s not obese, but he’s just fat enough that we’ve decided to shame him for it.

Lucano loves to pose for pictures of himself cuddling black babies and patting black children on the back and sitting amid a sea of dirty-looking black people.

In the late 1990s he hatched a scheme whereby immigrants would inhabit abandoned structures in his town and thereby enrich the area by enabling the mayor to pose for pictures with black people. In 2010 he was voted second runner-up in some contest that sought to name the world’s greatest mayor. During the engineered 2015 migrant crisis, his hairy arms welcomed an estimated 450 swarthy and flea-ridden Third Worlders into his humble village of only 1,800 Italians. In 2016, Fortune magazine named him one of the world’s 50 greatest leaders. He received Germany’s Dresden Peace Prize in 2017.

This year he’s been arrested on charges of aiding and abetting illegal immigration. It is alleged that he fabricated official documents and arranged sham marriages in order to flood Italy with non-Italians. Italian police say they eavesdropped on a conversation where Lucano told a Nigerian girl that he can forge an ID card for her and where he advised her that the best way to obtain permanent residency is to marry some hapless, clueless, self-hating Italian dude. He reportedly told her, “To disobey these crazy laws I go against the law.”

Lucano and his female partner, whose name is Tesfahun Lemlem and whom we’re going to assume is a Negress, have been placed under house arrest.

If convicted, we feel he should be forcibly exiled to Nigeria.

“MEAN GIRLS” AT SCHOOL FILE FALSE SEXUAL ASSAULT CHARGES AGAINST MALE STUDENT
As the unspeakable horror of the Kavanaugh confirmation demonstrates, women should be believed even when they’re lying.

That’s exactly what officials at a western Pennsylvania high school are accused of doing in a lawsuit filed by Michael and Alecia Flood on behalf of their teenage son, who is unnamed for legal reasons.

The suit alleges that the school’s “mean girls”—it actually uses that phrase—conspired to bully, harass, falsely accuse, and destroy their son:

[He] was forced to endure multiple court appearances, detention in a juvenile facility, detention at home, the loss of his liberty and other damages until several of the girls reluctantly admitted that their accusations were false.

The suit contends that their son:

• Had masking tape with the word “PREDATOR” written on it taped on his back during choir practice without his knowledge.

• Was accused of sexually assaulting a girl at a local pool while he worked as a lifeguard—an allegation that was corroborated by another girl. During a taped conversation, the witness to the purported assault admitted she made up the story because “I just don’t like him….I just don’t like to hear him talk.…I don’t like to look at him.”

• Was removed from class by local police in April of this year and placed in leg and wrist shackles in front of classmates after a girl accused him of breaking into her home and raping her. The girl’s story was corroborated by two other girls. Police formally charged him with indecent assault, criminal trespass, and simple assault. All of his female accusers subsequently admitted the story was false.

The suit also alleges that even though school officials knew that the girls had admitted to lying, they were not disciplined or even reprimanded.

This story serves as further evidence of why you should only believe women when they’re telling the truth.

“WEST SIDE STORY” CANNED DUE TO UNBEARABLY WHITE CAST
The musical West Side Story was written by Leonard Bernstein and Stephen Sondheim, neither of whom to our knowledge was ethnically qualified to join the white street gang The Jets or the Puerto Rican street gang The Sharks. It is Romeo & Juliet recast in racial terms and ostensibly designed to bring the races together.

Hispanic students at Kent State University–where no students have been shot to death since 1970—became so pissed-off at the casting of the school’s new production of West Side Story that their greasy little tantrums were able to put the kibosh on the play entirely.

The problem—if it can be called that—was that the three leading Puerto Rican roles were given to non-Hispanics.

According to Viviana Cardenas, who lost the role of Anita to a female of Negroidal extraction:

Once I read (the list) again and I really saw…all of the casting choices, I was just blown away because it was not correct at all….It’s more than just getting a role….I don’t get to tell other people’s stories because of the color of my skin, but yet when there is this story that is about people of cultures like me, about people of color like me, and that gets taken away from me…that was the most heartbreaking.

When it was suggested to Cardenas that perchance the most talented actress landed the role, she insisted that “there are more things that need to be considered than just that.”

OK then. Have you considered that Mexico and Puerto Ricans are shitholes and that you’re lucky to live in America?

Most people—even leftists—seem to believe in physical differences between groups of different continental origins. All the data regarding intelligence also suggests there are demonstrable disparities in cognitive aptitude. But in in his new book, Blueprint: How DNA Makes Us Who We Are, geneticist Robert Plomin argues that genes are also the primary determinant of an individual’s personality.

We now know that DNA differences are the major systematic source of psychological differences between us. Environmental effects are important but what we have learned in recent years is that they are mostly random – unsystematic and unstable – which means that we cannot do much about them.

If this news makes you angry or upset, that’s clearly your genes talking. You cannot do much about it.