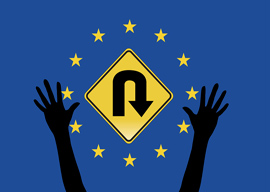 A new, huge wave of refugees from Africa and the Middle East is rolling in. It is high time to face the uncomfortable truths.

In Africa there are 7 million more people every 100 days. If we took in one million Africans, it would make up for the population deficit in 14 days! In Nigeria alone, more children are born every year than in the whole of Europe.

These figures clearly show a breach in the dam. The E.U.’s open external borders are pure madness. A population explosion and economic exodus of this magnitude cannot be combated by allowing all Africans to enter Italy via the Mediterranean route, apply for asylum, and travel on to Northern Europe. “The E.U. is acting like an installer who distributes water in the home in the event of a burst pipe, instead of repairing the damage,” said France’s former president Nicolas Sarkozy.

Nowhere else in the world are social benefits distributed as generously as in the E.U.

Northern Europe has become a magnet for millions of immigrants, including from the Middle East. For example, in twenty years’ time Austria will be 30–40% Muslim; at least one in three Viennese will be Muslim—if immigration remains strong. Austria, a country of less than 9 million people, would then be on the way to a Muslim-majority society. Even with the complete closure of the E.U.’s external borders and “zero immigration,” the proportion of Muslims in Austria will double. The reason: Austrians are on average 41 years old—whereas Muslim immigrants are on average thirteen years younger and have a higher birth rate.

This migration of peoples is fueled by a huge “asylum industry” that makes billions in business. Taxpayers are now financing private relief services, accommodation providers, security companies, course providers, contractors, and lobbyists. NGOs are becoming shadow governments. The Italian public prosecutor’s office accuses some of them of direct cooperation with tugboats. Ideologue journalists, politically correct media professionals, and good-human politicians place anyone who criticizes these conditions “in the right corner.”

The recently deceased evolutionary biologist and behavioral researcher Professor Eibl-Eibesfeldt said the following in an interview with the German Focus:

If someone were to move the border post in Europe by only ten metres, there would be terrible noise, but the quiet conquest of immigration should be tolerated? I would suggest that Europe, including Eastern Europe, should close itself off on a large scale and gradually raise the level of the poor countries of the Third World through aid. There’s nothing else you can do about a population explosion of this magnitude, import the problem if you’re stupid at best.