“The Whites Are Our Misfortune” 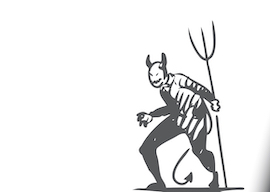 It occurred to me this week that anti-whiteness is the new anti-Semitism. Not that Jew hatred no longer exists. It does, of course. But the formula’s been tweaked. See, Jews in olde Europe were seen as black magical. Satanic devils, evil from the moment of conception, eternally cursed for the death of Jesus. Jews could mesmerize you. They could spellbind your virginal women and have their way with them. They drank blood and ate babies; they stirred cauldrons and recited incantations.

During Europe’s darkest periods, Jews were blamed for everything from the plague to crop failures.

By the dawn of the 20th century, anti-Jewish ideology had become “enlightened”…but not by much. The old supernatural ideas still lingered within the new eugenic lingo. The Nazi “intelligentsia” frequently spoke of Jews as devils and demons (Goebbels referred to Jews as the “demons of decay”). They were still corrupters, altering not just the economics of a nation but its very soul, and everything wrong with you and your good Christian family could be placed squarely on their shoulders.

These days, anti-Jewish sentiment in civilized nations (and especially in the U.S.) has largely dropped the superstitious mumbo jumbo for “real world” beefs about Jews’ politics. Ironically, the most recent anti-Jewish mass shooters were not angry at Jews for being Jews (a massive shift from historical anti-Semitism). Instead, they were angry at Jews for helping to facilitate the mass importation of invasive Third World immigrants. The killers took a simple political fact—Jews in the U.S. lean left and generally support open-border policies—and loonied it up into “If I kill some kikes, it’ll keep the beaners out.”

Generally speaking, far-rightists in the U.S. who hate Jews hate them more for their politics than for their identity. Whites, on the other hand, are totally hated by leftists just for being white. Whites are now hated for the exact same reason Jews were hated in the past: They exist. The parallels between current anti-whiteness and old-timey Jew hatred are strong. Whites are born cursed (white privilege), and they walk the earth to torment the good and the decent. Everything bad that exists today, and everything bad throughout history, has been because of the white menace. Whites are “the source of the world’s ills” (that’s an exact quote from The Guardian, frighteningly similar to the motto on the masthead of Der Stürmer: “Die Juden sind unser Unglück!”—“The Jews are our misfortune!”).

And whites, if not stopped, will kill us all through “climate change,” which is caused by whiteness (yes, “scientists” actually do make that claim).

“In the end, racial superstitions are all about blame-shifting.”

Ask the average black person about the infamous “Tuskegee experiment,” and most will say, “Whites gave black men syphilis.” That’s untrue. The Tuskegee study, highly unethical though it was, involved white and black medical professionals who allowed blacks to go untreated after they caught syphilis on their own. It was a vile endeavor, but the idea that whites “give” diseases to blacks mirrors the Middle Ages myth that Jews gave whites the plague.

If you’re nonwhite, you get to pin your every problem on whites. Whites made you sick. Whites are why you got fired. Whites are why you robbed that liquor store. Whites are killing you with their evil thoughts, which are sucking the life out of you like the aliens in Lifeforce. The very presence of whites forces women of color to miscarry (I’m not making that up…and this lunatic claim is found not in a Nation of Islam pamphlet, but on “mainstream” news sites).

This is good old-fashioned irrationality. It’s why people of color can attack whites for killing their fetuses in utero just by the power of their presence, and—at the same time—attack whites for seeking to save nonwhite fetuses from abortion mills. “Those demons are killing our fetuses! Also, those demons are stopping us from killing our fetuses!”

If that seems illogical to you, just remember that superstitions only make sense to those entranced by them. Superstitions allow people to escape the responsibilities of living in the real world and understanding actual cause and effect. “Whites are killing our fetuses with their racist thoughts! Now I’m off to vote for Democrat congresswoman Felicity Fetuskiller, as I do every two years.” In the Middle Ages, when farmer Deutschmann declared, “Ach! My virginal 13-year-old daughter is with child! She was hypnotized by a Jew,” it absolved him of having to face the reality of why his little girl was actually pregnant. Maybe he shouldn’t have hired a farmhand who goes by the nickname “Horndog Hans,” or maybe he needed to realize that every time jolly old Uncle Jürgen comes to visit, preteen girls end up pregnant all over town.

In the end, racial superstitions are all about blame-shifting.

Which brings us to Chicago, and Mexican immigrant Arnulfo Ochoa. Last month, his pregnant 19-year-old daughter Marlen Ochoa-Lopez, already the mother of a 3-year-old, was lured to the residence of 46-year-old fellow Latina Clarisa Figueroa and her 24-year-old daughter Desiree, under the pretense of picking up some free baby clothes and a stroller. Unfortunately, the “let it go” in letgo.com doesn’t always apply to the seller, so when Ochoa-Lopez showed up to collect her free stuff, she was strangled by the murderous pair, and her baby was cut from her belly so that the elder Figueroa could claim it as her own. Sadly, the baby was badly injured during the mother/daughter tag team’s unauthorized “sí-section.”

It’s a brutal tale, and no laughing matter (says the guy who just wrote “sí-section”). But it’s also one that doesn’t involve evil white men. One noble female Latinx person of color was murdered by two other noble female Latinx persons of color. How could demonic white racism possibly factor into this story? Well, just ask Ochoa-Lopez’s father, Arnulfo. At a press conference held by the Ochoa family last week, Arnulfo blamed “these anti-immigrant laws” for the crime, and he claimed that “racism” was the reason police didn’t “take action sooner and save a life.”

Why would the elder Ochoa blame racism for a crime committed by Latinas on a Latina? Well, for the same reason some of his family members were clutching crucifixes. Faith! “Whites dunnit” is the official faith of choice for most people of color in the U.S. today.

Granted, the Ochoas are grieving, so they deserve some slack for being irrational in the wake of such a horrific crime. Still, I can’t help but wonder why none of the family members at the press conference praised the quality of the murderous Figueroa family’s empanadas or carnitas. I thought “better food” excuses all murders committed by Hispanics. I guess that’s only when the victim is white.

From my perspective, no one is to blame for Ochoa-Lopez’s murder except the two tarditas who killed her. But if it gives Mr. Ochoa some inner peace to direct his anger toward something grander in scale, how about asking if the influx of illegals, and the crime that often accompanies them, are spreading cops too thin in major metropolitan areas? Or how about the fact that every member of the Ochoa family who spoke at the press conference spoke Spanish? Maybe if immigrants learned the damn language, they could communicate better with police. We didn’t win Illinois in the Mexican-American War, Mr. Ochoa. Having bilingual cops in Southwestern border states makes sense—it’s just smart policing. But you’re in Chicago. Maybe you should adapt to the city, rather than expecting every cop to adapt to you.

But it turns out the cops, in fact, did nothing wrong. The delay in finding Ochoa-Lopez’s body was not their fault. When faux mamá Figueroa took Ochoa-Lopez’s baby to a hospital claiming it was hers, hospital staff members immediately saw that this was not a woman who had just given birth (hell, even Middle Ages doctors could have figured that out). Yet the suspicious hospital workers did not call the police. Had they, the cops might have had an early lead. But no, they sat on the info and let Figueroa start a GoFundMe for the dying infant whose mom she’d just murdered.

Why did the hospital staff stay mum? I’ll put ten bucks on fear of being called racist (“You must take a nonwhite woman’s word when she says she just gave birth!”). I’ll wager another ten-spot that somewhere on the staff is a white feminist who holds that all women must be believed even when they claim things that are medically and scientifically impossible (“Judge Kavanaugh rape-trained me 200 times. It left no physical marks or medical traces, because…he’s a magical demon!”).

The tragic truth is, there was no way police could have “taken action sooner and saved a life.” Ochoa-Lopez was dead within minutes of entering Figueroa’s home. By the time Ochoa-Lopez’s family noticed she was missing, she was already cold. Compare that with the case of 12-year-old white girl Polly Klaas, whose kidnapper (and subsequent murderer) was actually helped out of a ditch by oblivious cops and sent on his way after taking the girl. They had him, and they let him go. Mr. Ochoa should be grateful for the small mercy of not having to live the rest of his life tormented by such “if onlys.”

Whites didn’t cause the Ochoa tragedy, and whites couldn’t have prevented it. Unless whites are magic. Maybe they should’ve used their wizarding skills to warn Ochoa-Lopez that the “free baby clothes” offer was a setup. Those damned racist telepathic wizards…they never help people of color.

I’m not trying to heap scorn on a grieving dad. But my point is that he’s a complete nobody who was thrust into the spotlight unexpectedly, and his first reaction to his daughter’s death was to spout antiwhite conspiracy rhetoric. That’s when you know a myth has reached max penetration, when the dirt farmers and ditchdiggers start spewing it. “Intellectuals” are supposed to spout bullshit; it’s practically part of the job description. But when that bullshit leaves the university campus and becomes an immediate talking point for simple working stiffs…well, now you’ve got serious saturation.

“Whites did this, and they could have stopped it. Their demonic powers caused this tragedy, and they could’ve used their powers to make it right, but they did nothing.” That’s become the standard go-to argument for every angry or grieving nonwhite.

As a Jew, I take no pleasure in seeing the “evil demon scapegoat” baton get passed to a new group of people. But as a historian, I do take a certain amount of cynical interest in witnessing the consequences when a society long past its Dark Ages imports millions of immigrants from nations still immersed in theirs.