The Will to Belief 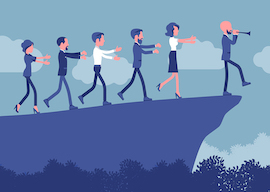 There are lies, damned lies and statistics, said Disraeli; and I doubt that any of us have never misused a statistic in the course of a discussion, either wittingly or unwittingly. Most people are apt to take correlation for causation, and if I say that people of high intelligence are apt to have big feet, someone is bound to conclude that our brains are in our toes.

Statistics are the lifeblood of any political discussion these days, and we often choose among them not to reach a valid conclusion but to validate a conclusion that we have already reached. Whatever we may feel about our neighbors, we love our conclusions as ourselves.

On the 27 February, the headline of the Guardian newspaper ran:

The first paragraph of the story underneath ran:

The government has issued a bleak warning over a no-deal Brexit, estimating that the UK economy could be 9% weaker in the long run…

Irrespective of what actually happens in reality, which might or might not be an economic disaster, this headline and its accompanying opening sentence are more mood statement—propaganda, in effect—than information. “May cut” and “could be” are only hypotheticals; “in the long run” is so indefinite as to be useless and in any case refers to a counterfactual whose veracity cannot be known with reasonable certainty even in retrospect. What is ‘”in the long run”? A year, five years, a hundred years? And 9% of what? Of what the economy might otherwise have been—might have been when? Or 9% of what it is now? This is economics as astrology for the educated, no better than “This month you will meet an important stranger, and it is a good time to seize your opportunities.”

“Whatever we may feel about our neighbors, we love our conclusions as ourselves.”

As to government estimates, they are hardly tablets brought down from Mount Zion. In short, the headline and the beginning of the story are to the mind what wallpaper is to a room: They create a lingering impression but add nothing to structure.

Of course, it is inevitable that newspapers these days do not so much relay news or information as opinion: They arrive too late to be purveyors of information in an age of instantaneity. The rapidity with which opinion is expressed has increased greatly in my short career. When I started out as a journalist, a newspaper might give me a few days to concoct an article about something or other, allowing at least a little time for research. But as technology changed the speed with which newspapers could be produced, the time in which an article was required became shorter and shorter, so that there was no time, sometimes not even an hour or two, for reflection. In vain did I argue that extra time would improve the value of the article; the point was speed, not depth. I was reminded by the editors that in the kingdom of the ignorant (in which readers were assumed to reside), the man with one fact was king, and thus very little information was required. The ability to fill the space with something tolerably coherent and not totally irrelevant to the subject was the skill required. And as far as the newspaper was concerned, an event that took place the day before yesterday might as well have taken place in 4000 BC, no matter how important it might have been. History became ancient ever more swiftly.

The newspapers, then, were more and more part of the entertainment industry, essentially frivolous. This tendency has only accelerated. In the matter of news, our tolerance of delay in understanding is almost zero. As soon as there is a terrorist attack, say, we demand to know not only who did it, but why. A psychologist is wheeled on to give an instant opinion, which is probably not very different from the opinion he would have given before he knew anything about the terrorist, or even before the attack had taken place. The terrorist was, or will be, a young man who loved football, went to nightclubs, drank, came from what used to be called a broken home, and converted suddenly, and none of his neighbors would have guessed that he was about to do what he did (he was quiet, friendly, and polite, just a normal boy), etc., etc. One could write a few such profiles in advance, and select among them as one sticks stamps on envelopes according with the destination of the letter. And we, the readers, would be under the impression that we had learned something that we had not known before.

I have had the experience, as many people have, of being able to compare a person or event from personal knowledge with what appears in the media, and finding the latter wrongly described or reported. For example, I knew a prisoner whose death in prison was reported in the press in such a way as to give a completely misleading impression of neglect and even cruelty, but I was unable for reasons of confidentiality to correct it, so that the impression became an established historical fact. I have done a little war reporting, and have found misreporting to be the rule in large things as in small.

But despite the fact that I have never found anything that I knew personally to be accurately reported, I am still inclined to lend credence to what I read or hear. Perhaps—I tell myself—everything else is properly reported, it is just an unfortunate coincidence that error has always crept into the reporting of what I know by personal acquaintance. Therefore I read or hear, and yet believe.

This surely suggests a will to belief. One cannot live in a state of permanent skepticism about everything. In fact, though I have spent much of my life among crooks, criminal, and journalists, I am rather a trustful person. When my financial adviser lays his graphs before me, showing me that I am richer than I was the last time round, with specially tailored graphs (9% growth in the long run) to prove it, I believe him because I want to.