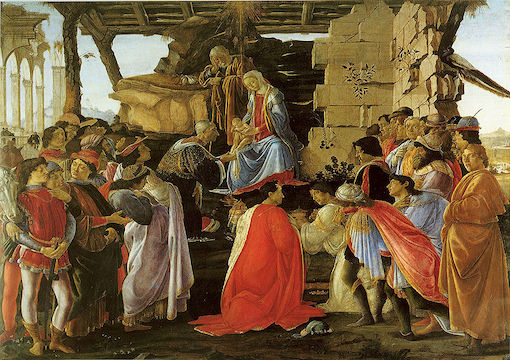 Sandro Botticelli, Adoration of the Magi (circa 1475).

One of the most astonishing things about the woke is their high boredom threshold. They seem to have the same thoughts about the same subjects, expressed in the same language, all their waking lives. They never tire or let their vigilance down. They look at Raphael or Botticelli and see only social injustice. They are terrible bores.

The explanation of their persistence, which resembles that of flies on a corpse, is that truth, which holds no interest for them, is not their object, but power, the cynosure of every ambitious mediocrity’s eyes. To change the metaphor slightly, the lunatics have taken over the asylum or, in the case of the museums, the philistines.

The latest victim of woke philistinism is an exhibition called Medicine Man at the Wellcome Institute in London, which has closed permanently for reasons I am sure the reader can supply for himself—sexism, racism, ableism, erasure of the marginalized, blah, blah, blah. Sir Henry Wellcome is reprehended for having been a rich and powerful white man in an age of colonialism: reprehended despite the fact that he began one of the largest foundations of medical research in the world and also the largest library of medical history in the world.

“Increasingly, there is a tendency for the guardians of cultural treasures to hate what they are supposed to preserve.”

Medicine Man was an eclectic selection of Sir Henry’s vast collection of objects from around the world that had a connection with the practice of medicine. Sometimes this connection was rather tenuous: for example Napoleon’s toothbrush, which presumably kept his dental caries at bay. There were apothecaries’ jars; old skull-trephining drills of great elegance and beauty, though one trembles to imagine what a trephination must have been like in the 17th century; portraits (for example of the half-mad Welsh doctor, druid, and pioneer of cremation, Dr. William Price); and artificial limbs.

Let us take the accusation, made as part of the reason for closing it, that the exhibition was ableist because it displayed artificial limbs of a previous age. The curator, apparently, saw nothing in these artifacts but the deliberate humiliation or exclusion of amputees, but I saw quite the reverse, namely ingenious artifacts, crafted with enormous care and attention to detail, that were humane efforts to improve the lives of those unfortunate enough to need them (whether they were successful is another question). In other words, those in charge of the exhibition had what would once have been called dirty minds, which is to say minds that look at the world through a filthy lens. For them, the worst possible interpretation of all previous efforts must be the true one, since everybody until our own enlightened and altruistic generation was actuated by the worst possible motives.

That Sir Henry Wellcome was a very rich man cannot be denied, but it also happens that he was a self-made one. He was not the scion of immemorial privilege; he started from nothing and used his great accumulated wealth to create something that was of immense value not only to this country, but to the world and, dare I say it, civilization. There have been many very rich people, but there is only one Wellcome Library (which is not to deny that very rich people have founded other invaluable institutions).

Behind the slur that Henry Wellcome’s legacy is toxic in part because he was very rich and therefore very privileged is the implicit argument not only that there should be no such thing as great wealth in private hands, and that such wealth is inherently corrupt and corrupting, but that careers such as his should not be permitted. In effect it suggests that the world would have been a better place had Wellcome, his library, and his institute never existed (apart, of course, from the salaries the latter pays to curators and the like, his one contribution to good causes).

The woke will not be satisfied until every cultural institution is examined microscopically for the moral purity of those who founded it, according to their latest and current moral certitudes—which, of course, may change, usually in the direction of more stringency and stridency. There is no such institution that can pass their test.

In Heidelberg, for example, there is a gallery of art produced by patients of German lunatic asylums collected by Dr. Hans Prinzhorn (1886–1933), who wrote a pioneering book on the art of the mad. The gallery publishes scholarly and beautifully produced monograph on its holdings.

One can just imagine, however, the arguments that the philistine curators of the Wellcome Institute would advance to demand the closure of the gallery. The gallery is exploitative of lunatics who were hospitalized against their will; and their work, strange even when beautiful, is exhibited without their permission in order to appeal to the condescension, prurience, or salacity of the public; some of the pictures in the Prinzhorn Collection were shown in 1938 in the notorious Nazi period in Munich of “degenerate art”; many of the artists whose work is exhibited were killed in the Nazi program of extermination of the mentally ill; and Dr. Prinzhorn himself is said to have been a Nazi sympathizer, though he did not live long enough to commit any of the Nazi crimes. Nevertheless, his work is tainted by the use to which it was put. And let us not forget that he came from a milieu in which Nazism was widespread.

There are many good reasons, then, according to the woke, why the gallery should be closed altogether, and the works in it never exposed again to the gaze of the idly curious. The Prinzhorn Collection, at base, is no better than the exhibition for an entry fee of the lunatics in Bedlam. Such would be the arguments of the curators of the Wellcome Institute.

Increasingly, there is a tendency for the guardians of cultural treasures to hate what they are supposed to preserve. Many librarians, for example, loathe books and can’t wait to replace them with nice, clean computer terminals. When they can’t destroy them altogether, they love to disfigure them.

We were appalled (rightly) when the Taliban blew up the statues of Buddha in Bamiyan and ISIS destroyed Palmyra, but we have our own Taliban, the woke, eager to experience the joys of destruction in the name of absolute good—as defined by themselves.