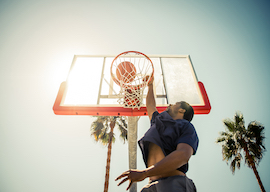 Throughout his brilliant career, Michael Jordan was notoriously silent on political issues, even though many people urged him to speak out in support of left-wing causes. The greatest basketball player ever, it was widely thought, should have used his international celebrity to call attention to the plight of blacks in America, and to advocate for the progressive changes that they badly needed. Asked to explain his lack of engagement with politics, Jordan gave a profoundly cynical answer: “Republicans buy sneakers too.”

The controversies the NBA saw this week serve as reminders that it would be wise for professional athletes and those associated with professional sports to avoid opining on politics, because while making their righteous pronouncements, these persons, who nowadays are overwhelmingly left-wing, sometimes show themselves to be inconsistent takers of positions; or at their worst, sheer hypocrites willing to overlook an ostensible evil for lucre’s sake. What is more, their opinions, which are often ignorant, may well alienate fans, who don’t, after all, follow professional sports in order to learn jocks’ and coaches’ views on human rights and transgender bathrooms.

The first controversy concerned Houston Rockets general manager Daryl Morey, the man having tweeted his support—“Fight for freedom, stand with Hong Kong”—for the pro-democracy demonstrations in Hong Kong. Now, the NBA is hugely popular in China, where the league generates millions in revenue each year, and in response to the Chinese backlash (and to pressure from within the Rockets organization, one imagines), Morey quickly deleted his tweet and issued an unmanly apology:

I did not intend my tweet to cause any offense to Rockets fans and friends of mine in China. I was merely voicing one thought, based on one interpretation, of one complicated event. I have had a lot of opportunity since that tweet to hear and consider other perspectives. I have always appreciated the significant support our Chinese fans and sponsors have provided and I would hope that those who are upset will know that offending or misunderstanding them was not my intention. My tweets are my own and in no way represent the Rockets or the NBA.

These words doubtless met with the approval of Rockets owner Tilman Fertitta, who assured people that Morey’s tweet did not speak for the team.

“We apologize. We love China, we love playing there,” Rockets star James Harden told reporters this week, in an obvious attempt at damage control.

“Wokeness can be advertised or abandoned according to the needs of the moment.”

The wokest of all the professional sports leagues, in 2016 the NBA pulled the All-Star game from North Carolina in order to protest the state’s transgender bathroom bill. It was bizarre, of course, for the NBA to elect to “take a stand” on the matter, as if by playing in North Carolina the league would have signaled support for the bill. After winning the 2017 NBA Championship, the Golden State Warriors broke with league custom by not visiting the White House, Steph Curry & Co. not wanting to meet with our “authoritarian” president. Now, in the case of an actual authoritarianism—namely, China with its terrible record of human rights abuses—the NBA acts like a simple statement calling for democracy is such a thorny thing as to require an “explanation.” Here is the NBA’s statement on Morey’s comments:

We recognize that the views expressed by Houston Rockets General Manager Daryl Morey have deeply offended many of our friends and fans in China, which is regrettable. While Daryl has made it clear that his tweet does not represent the Rockets or the NBA, the values of the league support individuals’ educating themselves and sharing their views on matters important to them. We have great respect for the history and culture of China and hope that sports and the NBA can be used as a unifying force to bridge cultural divides and bring people together.

Funny stuff, this. Just like same-sex bathrooms, Morey’s pro-democracy tweet doesn’t “represent the Rockets or the NBA,” which has “great respect for the history and culture” of Communist tyranny. Yet despite that insipid cant about bridging “cultural divides” and bringing “people together,” the Chinese Basketball Association has officially severed ties with the Houston Rockets, and China’s state broadcaster canceled plans to show a pair of preseason games in that country this week. The league has lost some Chinese revenue, and it will be interesting to see what the NBA does to try to keep that from happening in the future. It is certainly strange, and funny, to see the overwhelmingly black NBA, with its urban image and hip-hop culture, try to appear super woke on the one hand but properly respectful of the very unwoke Chinese on the other.

In response to NBA commissioner Adam Silver’s vague affirmation of the importance of free speech, China Central Television issued a statement that reflects China’s fundamental illiberal difference from the United States: “We believe that any remarks that challenge national sovereignty and social stability are not within the scope of freedom of speech.” To be sure, free speech is a vital value for American leftists who purport to “speak truth to power.” So one might expect the progressive NBA to support Morey’s opposition to Beijing’s oppression. Leftists, however, have a long history of ignoring the evils of Communism. Besides, these days, unless the guilty party is the United States, oppression, racism, and other evils may not merit a mention from leftists. Indeed, for the intersectional left, it is as if these things would not even exist were it not for the U.S.

The second controversy happened in Philadelphia on Tuesday, where the 76ers played a preseason game against the Chinese team Guangzhou Loong Lions. While they watched the game, a man named Sam Wachs and his wife each held up signs that said “Free Hong Kong.” Security, however, promptly confiscated their signs and asked them to leave the stadium, whereupon they began to yell the same slogan. Wachs and his wife were then ejected.

The 76ers explained in a statement:

The Wells Fargo Center’s event staff is responsible for the security and comfort of all guests at arena events, including 76ers games. At last evening’s game, following multiple complaints from guests and verbal confrontations with others in attendance, two individuals were warned by Wells Fargo Center staff about their continuing disruption of the fan experience. Ultimately, the decision was made by Wells Fargo Center personnel to remove the guests from the premises, which was accomplished without incident.

Although I don’t doubt that Wachs and his wife were “disruptive,” having seen lots of Philly fans remain in attendance at sporting events even after yelling things far more offensive (to most people) than “Free Hong Kong,” I think it’s very possible that it was the NBA’s desire to minimize bad publicity (that is, tension with China) that led to the couple’s removal.

In a world where people are expected to stick to their principles instead of being hollow men, Morey’s tweet would not have been controversial. Morey’s colleagues would have said to themselves: “He has a right to his opinion. And you can’t please everyone—let’s just move on.” Morey himself certainly would not have felt obliged to apologize or explain himself. In our world, the events revealed that the only thing that matters in woke capital is capital—the wokeness can be advertised or abandoned according to the needs of the moment. As at ESPN and Sports Illustrated, chatter about “social justice” is commonplace in the NBA. Meanwhile, oppressions that are unthinkable in the U.S. but daily occurrences in China are to be passed over in silence, lest the inconvenient truth affect the bottom line.