The World Looks the Other Way 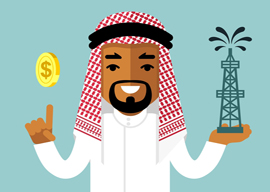 Is Mohammad bin Salman a murderer? Is it fair to say he is a hairy coward who has starved millions of children in Yemen? Did his crawling parasites dismember Jamal Khashoggi in Istanbul last week? Is this man a perverted sadist? If so, this is the real scandal.

I doubt much will come of this murder most foul. Jared Kushner, The Donald’s son-in-law, could well see to it. Kushner probably smelled money to be made from the Saudis as soon as he got his Jersey bum in the White House. But I suspect he has been played by MBS, as has The Donald, and as will every financier licking their chops for the initial offering of Aramco. MBS might well be a maniac and out of control, though Thomas Friedman of The New York Times described him as a messiah, a cross between Lincoln and Roosevelt. No prizes for guessing what MBS did for Friedman in return.

The Davos-in-the-desert conference is supposed to take place this week. Most people have dropped out, and no heads of state plan to attend. Last year the ghastly Tony Blair and the midget Nicolas Sarkozy were the guests of honor. As the lady once said, they would, wouldn’t they?

“Money is money, and the Saudis promise a lot.”

So what’s a murder or two, a kidnapping of a Lebanese prime minister, or thousands of Yemeni children dead, for that matter? Money is money, and the Saudis promise a lot. Do they deliver? Erdogan needs money, will the Saudis buy him off? Will the footage of the torture and dismembering of Khashoggi be disappeared by the wily Turks? Will The Donald stay quiet and rant against Iran? Kushner persuaded Trump to make Riyadh his first stop as president after a lunch with the crown prince. The Donald is now saying that he does not want to jeopardize lucrative defense contracts with Saudi Arabia. Which means we don’t want to know who ordered a man to be dismembered. American academics will also stay stumm. The Saudis have given Harvard millions and have promised more to come to other places of learning. The Clintons, too, will change the subject, as their foundation has taken in tens of millions. Another quiet man will be my old friend Imran Khan, because he needs 20 billion to keep the country going, and the Saudis need Pakistani troops as they are bogged down in Yemen. It would be easy to feel omnipotent. Everyone needs money—MBS promises a lot, and goes about his business.

Seventeen years after 9/11, people are dying of cancer because they lived near the Twin Towers, yet the Obama administration disallowed lawsuits from the families of the 3,000 dead by sixteen Saudi terrorists against the kingdom. But if you thought comedy was dead, think of the International Criminal Court in the Hague and laugh yourself to sleep. It caught a couple of Serbs and an African killer after they went on the run.

Mind you, here in New York, no one gives a flying you-know-what about dead kids in Yemen or dismembered journalists in Turkey. Watching American television news and reading the papers fills one with gloom. How much did Trump know about the Khashoggi murder and when did he know it, seems to be the message the anti-Trump news outlets are going for. Their extraordinarily venomous attacks on Trump, the sheer volume of hatred, has no precedent. Hitler, Stalin, Mao, Franco never had it so bad. The left in America has lost it. I listened while a Washington Post writer made unhinged smears against Trump rather than say a word against the Saudis. Something is obviously very wrong here. The grisly end of a journalist should have the hacks up in arms, but they are strangely quiet. Are all the New York Times and Washington Post people on the Saudi take? Nothing would surprise me.

The Israelis have killed 200 Palestinians in Gaza this autumn alone, but such is the strength of the Israeli lobby in Washington, no one dares mention it. One Israeli dead vs. 200 Palestinians and we are supposed to mourn the former. American Jews have Trump and Kushner wrapped around their little finger, which is normal, in a way. All the major real estate developers are Jewish. What is much more frustrating is the Saudis being given a pass by Washington ever since the day FDR stopped there on his way back from Yalta and met with Abdul Aziz. The Saudis should be isolated, given an ultimatum to get out of Yemen, and ordered to pump more gas and bring the price of oil down—and they should stop the killing of innocent people. Who knows who should be extradited to face justice in the Hague?