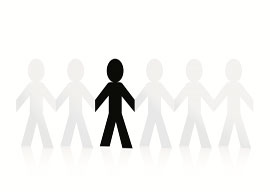 In America’s fifth year of having a black president, the five Republican-appointed Supreme Court justices had an opportunity on Monday to abolish racial and ethnic preferences for violating the 14th Amendment’s requirement of “the equal protection of the laws.” But they were unable to pull the trigger and so they merely sent the case back down to a lower court while recommending stricter scrutiny.

Will the Five live long enough to have another chance to get their courage up? An actuary could calculate the odds. (Scalia is 77, Kennedy 76, Thomas 65, Alito 63, and Roberts 58.) I suspect the chances aren’t that high.

Few have mentioned that the affirmative-action non-decision interacts deleteriously with the Schumer-Rubio bill that would boost immigration. The great majority of amnestied illegal aliens and new immigrants brought in under the bill, plus their descendants unto the seventh generation, would be eligible for racial or ethnic privileges.

These benefits are a zero-sum game that, mathematically, have to come out of the hides of the legally unprivileged such as non-Hispanic whites. As the number of Hispanic beneficiaries rises, the burden on non-Hispanics also rises.

It’s bizarre that immigrant groups”who chose to come to America, warts and all”are recipients of affirmative action. Indeed, it’s so inexplicable that virtually nobody attempts to explicate it. Even more strangely, opponents of ethnic preferences have largely failed to attack this indefensible salient. (Likewise, the quotas angle goes almost unmentioned in the immigration “debate” such as it is.)

Instead, everybody wants to argue over whether or not African Americans should benefit from quotas and disparate-impact lawsuits as compensation for slavery. I”ve been following these debates for 40 years, but they don”t seem to make much progress, just as the performance gap between whites and other races hasn”t changed much over those four decades.

But then, the most popular clashes tend to be the least resolvable. Baseball’s All-Star Game has been going on since 1933, for instance, and you might think that by now they”d have figured out whether the American or National League is better. But they keep playing the damn thing. You might almost imagine that the All-Star Game isn”t a serious quest for a permanent solution, that it’s actually distracting entertainment intended to perpetuate itself. The last 35 years of the Supreme Court arguing over quotas for blacks has been similarly diverting and unserious. It’s a perennial hot-stove topic that occludes more relevant questions such as immigration policy.

It’s common sense that if you don”t like racial preferences, then don”t make the problem worse by letting more people into the country who qualify for them. But common sense is suspect nowadays.

We live in an era when rational thought is checkmated by the phrase “All we have to do is….” If you point out, as Jason Richwine did, that on average, the children and grandchildren of illegal immigrants don”t do well enough in school to get jobs that pay enough to shoulder much of the tax burden, it’s considered a crushing rejoinder to say, “All we have to do is fix the schools.”

Back in the last major Supreme Court decision on collegiate affirmative action in 2003, Sandra Day O”Connor airily opined that she figured all this unpleasantness over the achievement gap would be soon be gone:

We expect that 25 years from now, the use of racial preferences will no longer be necessary to further the interest approved today.

After all, George W. Bush and Ted Kennedy had just gotten together to outlaw the achievement gap. Their No Child Left Behind Act mandated that by eleven months from today, all races had to perform with equal proficiency on school achievement tests. Mission accomplished!

Well, here we are 40 percent of the way through O”Connor’s quarter of a century and it turned out that the most effective idea anybody came up with for closing the gap was cheating.

Similarly, on the rare occasions when anybody points out that increasing immigration worsens the burdens on unprivileged white Americans, the response is: “All we have to do is end affirmative action!”

Well, the Supreme Court has had plenty of opportunities, going back to the Bakke case of 1978. As readers of a certain age might recall, in Bakke the Supremes outlawed “racial quotas” but approved “racial goals.” Not surprisingly, nothing changed other than semantics.

Supposedly clever alternatives to quotas have often proved even worse. For example, to get more black and Hispanic firemen, the city of Chicago lowered the passing score on the fire department’s hiring exam to the fifth percentile among white test-takers. Then, it just picks randomly among test-passers. I don”t live in Chicago anymore, but that’s a frightening way to hire the guys who are supposed to save your life.