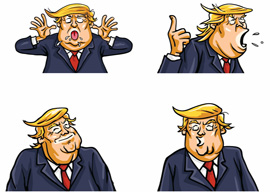 At long last, our traumatic national nightmare has finally come to a close, all thanks to Donald Trump, who last week loudly proclaimed to all who would hear that President Obama was indeed born in the U.S. Well, that’s a relief! Trump not only cleared the beleaguered Obama of latent Kenyanism, he also made sure to point out that, while Hillary had “started” the birther nonsense, it was he”Donald J. Trump”who “finished” it. And then he calmly and rationally explained why his doubts about Obama’s birthplace, doubts he so vocally expressed in 2011, turned out to be unfounded.

Oh wait, scratch that. He declared that he “finished it” and then, as the old joke says, he farted and flew out the window, with no time wasted explaining why the issue is no longer the Trump obsession it was in 2011. And why waste precious time on something like that? All that matters is that Donald Trump declared that he’s no longer concerned about the thing that Donald Trump was concerned about five years ago. And in unison, his supporters paraphrased Dennis Hopper from the alt-right’s (well, everyone’s) favorite scene in True Romance: “He never thought to tell me why, and I never thought to ask.”

Still and all, Trump’s “birther” mini”press conference got me nostalgic for the previous presidential election. Back then, my “hilarious” viral videos were still being carried by Fox News, Bill O”Reilly, The Washington Times, etc. And my biggest one from that election season (bigger even than the “Dogeater“ music video about Obama’s appetite for canine cuisine) was my parody of the (then) massively viral “Conversation With My 12 Year Old Self“ video, in which a grown man fields questions to himself that he had recorded when he was 12. That damn thing was accumulating hits by the millions, and I hatched the idea of parodying it by having a disillusioned 2012 Obama voter answer questions asked by her foolishly optimistic 2008 self.

It was a decent concept that mainly worked because I used a cute libertarian blond chick as the lead, as opposed to my own grizzled visage (it’s almost as if I was concerned about being recognized for something…). But beyond the cutesy hook, the video genuinely did have a point, which is that by and large, presidential elections are dependent on voter amnesia. In American politics, it’s nearly impossible to be a partisan and have total recall. Participation in the monkey circus requires the ability to blank out your memory every four years so that everything seems new and exciting. If you can erase the memory of four-year-old promises, you can quite easily get over the fact that they were never kept, and everything that your candidate is saying or doing that contradicts the things they said or did four years earlier seems A-OK, because who remembers four years ago?

Well, I kinda remember. Back in April 2011, when Trump was kicking up birther dirt like an angry baseball manager contesting a call, I decided to proactively tackle the issue, which was spreading through my Republican Party Animals organization like VD through a gay bathhouse. I moderated a symposium of sorts in the Republican Party Animals Facebook group, in which members were encouraged to hash out the issue, debate, discuss, and (my hope was) get the birther idiocy out of their system for good. Following Trump’s announcement of “closure” last week, I dusted off the thread from that 2011 debate. I think some of the comments are, to say the least, instructive, now that Trump has officially declared that he has nothing “on” Obama regarding the citizenship issue.

Because let’s be honest, one of Trump’s recurring mantras is “Trust me.” Foreign policy? “I watch the shows, I”ll figure it out. Trust me, it”ll be great.” The economy? “I”m a rock-star businessman. Trust me, I”ll fix everything.” Jobs? “I”ve heard about jobs, I know about “em. Trust me, there”ll be jobs.” Trust trust trust. And now here we are, a month and a half from Election Day, and there are, essentially, two types of Trump voters. There are the guys like me, the”forgive the conceit”pragmatists, the ones who simply can”t vote for Hillary under any circumstances but who have no illusions about Trump. He’s a lesser evil, and nothing more. At best, we hope he”ll replace Scalia with a decent constitutionalist, because we know that Hillary’s nominee will be to the left of Lavrentiy Beria. We”ll vote for Trump, but we don”t trust him. Not even a little.

And then there are the true believers. The ones who trust the man implicitly. Trump will build a wall. Trump will ban Muslims. Trump will not only make the trains run on time, but those trains will be headed straight for the border packed to the gills with illegal beans. The true believers have made Trump the Jodie Foster to their John Hinckley. “He gets us, man. And all we need to do is prove that we”re worthy of his love, and a mutually fulfilling relationship will result!” They see Trump as a man who shares their vision, whereas I see Trump as a man with no vision”an opportunist, a self-promoter, a braggart, a Schwarzenegger.

Revisiting that 2011 birther forum, I was struck by how Trump had pulled the same shtick he’s pulling now. He got people to read way more into his foray into the Obama citizenship issue than was warranted. Let’s look at just a few of the comments from that symposium. And as we do, let’s not forget this one little fact: Trump, by his own admission last week, had nothing on Obama, no secret evidence of his foreign birth, no presidency-ending proof of his illegality as president.

For propriety’s sake, I”ll only use the full names of members who are legitimate public figures. For everyone else, I”ll use initials.

Leading off the back-and-forth was movie producer Brooke Dammkoehler, who wrote:

Will Obama Be Singing the Birth Certificate Blues? Trump has been the stalking horse on this. Where there is smoke there is fire. There are no records of any kind on this man because he has had them sealed and what he chooses to show is suspect.

If Trump has an ace he’s the one who will be the guy to lay the information out on the table.

“Obama, where’s the birth certificate? Who are you?” will have the same effect on the Obama presidency as “Bush lied, people died.” The fact that the left is telling us it is a “non-issue” is proof that it has substance.

I”m torn…yes, there are more important matters to take care of…but this could be a silver bullet…fraud, imposter, fake, and liar come to mind…Americans are not too forgiving on those things. So many Americans are going to feel cheated when the truth is revealed…he is not who he claims to be.

If Trump has an ace he’s the one who will be the guy to lay the information out on the table. Drudge headlining that [Jerome] Corsi’s book on Obama’s birth certificate will be “utterly devastating””this goes along with my theory that Trump had the goods on Obama before he started his campaign, being too risk aversive to take the chance of looking like a fool, and Machiavellian enough to see the advance knowledge as a chance to become a presidential front-runner.

If there is something significant to hide (other than it says Muslim on it), why would the head of HI health dept, and [Gov. Neil] Abercrombie risk their careers for having vouched for it on file? And why wouldn”t any HI records clerk have sold that info for 1/4 mil to the Enquirer?

I honestly don”t think there is a HI birth certificate…He is not an American…his grandparents announced his birth in the paper, but he was not born there…that’s what my gut tells me…aside from being Muslim and having a different birth father.

Okay, Donald Trump would risk his own credibility over this? DONALD TRUMP? Please…..what part of “you never ask a question you don”t know the answer to” is not understood? Donald Trump could do anything he wanted for publicity and he chose this.