The Algebra of Divorce 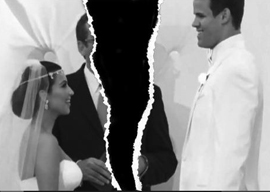 If breached at all, the real topics that cause marital discord are represented in a less-than-realistic manner. People really don’t know what relationships looked like before TV and movies told them what a relationship was supposed to look like. What actually existed before Disney, et al., reinvented and re-scripted male-female relations was a world brimming with deception, mistresses, stolen moments with the stable boy, lying, boredom, sexual problems, money problems, psychological abuse, and addiction. These things were accepted—but more importantly, expected—aspects of life and therefore of marriage. It was not scandalous or humiliating if you got a bad apple or your marriage wasn’t shiny and perfect. The world has not changed. Human nature has not evolved or improved.

The only difference is that now people walk around with tinted glasses, expecting and believing male-female relations to be Disney-pink, and when the picture goes grey or fuzzy they simply change the channel. Women are ill-prepared, and when they find out that “happily ever after” does not work as it does in the Disney or ABC version, they run away in fear, screaming divorce and ready to torch the house to the ground—children and family pets included. TV leads people to believe they can have a TV-type relationship and if they keep looking—if they switch partners, jumble the kids around a bit, get a new house, car, and maybe even move to a new city–reality won’t find them. Sitcoms and movies are nothing more than long commercials for a fantasy life that people want. Unfortunately, not enough parents taught their children not to believe everything they see on TV.

These factors are multiplied by stupidity. Even a little stupidity goes a long way. The facts don’t lie. We are getting dumber. Standardized tests are getting easier, and policies such as No Child Left Behind have eliminated history from the curriculum in eleven states and drastically reduced the average person’s vocabulary. People are being groomed to believe everything they see on TV. It makes them easier to govern.

So here’s divorce expressed as a mathematical equation:

Even if your husband’s little tics drive you crazy, marriage is worth it. The love of which Shakespeare speaks is a love of acceptance. The moral of Cinderella is not that everyone deserves a prince. Rather, the message for the not-so-stupid is that true love conquers all—all recognized flaws, weaknesses, and differences. Simply put: I love you even though you are a schmuck!