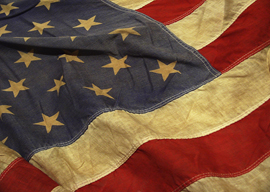 Reading the Declaration of Independence 235 years after it was written, it’s kidney-punchingly obvious that the United States government has become precisely the sort of bloodsucking tyrant against which the Founding Fathers revolted.

These days our primary financial and political mechanisms, as well as every jot and tittle of rhetoric that dribbles from our politicians’ mouths, all lurch toward centralized global codependency, whereas the Declaration of Independence encourages “separation,” “liberty,” and “dissolving political bands.”

The Declaration bemoans the fact that the King of England had blocked many of the colonies’ laws, whereas today the feds’ judicial henchmen routinely overrule the American electorate’s will in matters such as immigration, gay marriage, and anything else that obstructs its agenda’s steamrollering path.

The Declaration protests the fact that the King had created a “multitude of New Offices…to harass our people, and eat out our substance.” Today, America employs more people in government than in manufacturing. It lost a full third of its manufacturing jobs in the last decade alone while adding nearly two million government jobs.

The Declaration endorses such terms as “common kindred” and “consanguinity,” whereas today such sentiments are confined to a despised cattle pen of cultural “extremism,” but only if you’re similarly hued to the Founding Fathers. It’s a ghastly irony that America’s primary modern cultural demons are precisely the sort of people who made America.

“If the Founding Fathers were alive today, they’d kick us in the balls.”

The Declaration complains that King George “excited domestic insurrections amongst us” and encouraged “merciless Indian Savages,” whereas today the feds file their nails while violently anti-white mobs stalk urban streets. A mere five-minute walk from where the Declaration was signed, here’s what Philadelphia looks like these days. And like King George, today’s feds encourage a culturally antagonistic alien onslaught, this time from our southern border by those who, mistakenly or not, consider themselves the common kin of the aforementioned “merciless Indian Savages.”

Although one of the Declaration’s main grievances involved taxation without consent, I cannot name one of the hydra-headed taxes I’m forced to pay—under threat of imprisonment—about which I’ve ever been consulted, much less to which I’ve consented. And taxes now are absurdly higher than they were in 1776.

And the modern federal government is obstinately deaf to George Washington’s warnings about foreign entanglements and Thomas Jefferson’s grave distrust of bankers.

If the Founding Fathers were alive today, they’d kick us in the balls. They’d also say we deserve everything we have coming. And believe me, it’s coming.

It’s grimly ironic that the first installment of Edward Gibbon’s The Decline and Fall of the Roman Empire was published in 1776. The USA originally defined itself as a rebel against the British Empire, gradually became its successor, and now is certain to shrivel and implode.

One of Gibbon’s reasons for Rome’s decline was that it had overreached itself militarily, only to be gradually ground down and pushed back by the Persians. As one modern writer puts it, “Roman victories in Iraq were transitory and self-defeating.” Sound familiar? Gibbon also said that much of Rome’s military had fallen into the hands of barbarian mercenaries who gradually turned against their employer. Nowadays our insanely self-loathing and suicidal notions of tolerance have allowed our military to be infiltrated with openly hostile Islamic extremists. And our virtually nonexistent southern border is now patrolled by a Hispanic majority rather than an Anglo one.