The Arab Spring Turns to Summer 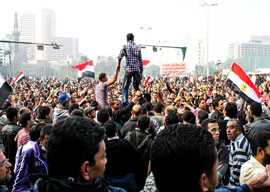 Roughly one year ago Mohamed Morsi won Egypt’s presidential election. At the time there was jubilation and optimism. Finally, the head of state would represent the people.

It took twelve months to appreciate the caliber of the people chosen to govern. Gradually, then rapidly, new laws were passed in Cairo that reflected not the body of Egyptians but the platform of the dominant Muslim Brotherhood party. It soon became clear that these characters had lost touch with the majority of the populace.

Over the past weeks enormous crowds once again gathered in Tahrir Square to protest their government. Yet the Cairo chorus for change, despite its tragic losses of life and unspeakable individual crimes, is a hopeful development as far as freedom is concerned. It demonstrates that Egypt may be the genuine article”a Middle Eastern country where free will has a chance of succeeding. Not only does the average Egyptian seem to believe in his God-given right to choose; he is willing to fight for it.

“No one anticipated how accustomed the average Egyptian had become to his personal liberties.”

Life-altering choices are often inconsequential to the lives of those telling us what choices we can make. Far too many of the “deciders” of society (West and East) insulate themselves from their decisions. If the Supreme Court wants to invalidate restrictive covenants, each justice should be forced to live in wholly integrated communities. If insular agencies want to require infant safety seats, the state needs to provide them to parents. If moralists demand a woman carry her baby to term, they damn well better be ready to do some babysitting for her when the need arises.

In Egypt it seems the people have gotten too used to deciding things for themselves to allow any brotherhood of bullies to begin curtailing those freedoms. The thinking in Cairo goes that if public kissing is forbidden today, tomorrow it will be women drivers, and the day thereafter women’s education, etc.

Many years ago at a symposium on Egyptian politics those of us who counseled for electoral openness were admonished, “If we ever have free elections in Egypt, we will only have one free election.” In other words, once the reins were loosened the Muslim Brotherhood would swiftly impose a version of sharia followed with increasingly draconian laws that would make any intended populism a thing of the past.