The Ascended Masters of Mt. Shasta 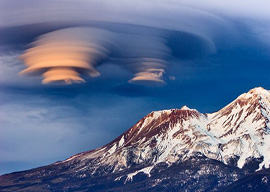 Living in a state where the elected leadership tends to fall somewhere between the criminal and the brain-dead, it is always a relief to turn from the political to the real. The meaning of “real” is debatable: As English authoress Elinor Glyn once opined, “California is a small island off the coast of Earth.” Thus there are many things we consider real that denizens of less-favored lands might not.

Students of the occult, folklore, cryptozoology, and allied disciplines will note that there are—in almost every country on the planet—regions and towns given over to more than their fair share of hauntings, UFO visitations, and unusual ancestral rites. The British Isles are filled with this sort of thing, but so are many regions in Continental Europe: to mention a very few, France has Brittany and Auvergne; Belgium has the Ardennes; Italy boasts the Abruzzo; and Germany has the Harz.

The United States has a fair number, too: Massachusetts’s Bridgewater Triangle and Salem; Vermont’s Bennington Triangle; and Arizona’s
Sedona and the Superstition Mountains. But while California as a whole might qualify for this sacred status, of all the Golden State’s many paranormal preserves one stands out clear: legend-shrouded Mount Shasta.

“Mt. Shasta was seen by its indigenous neighbors as a sacred place, the dwelling of one or more of their various deities.”

Shasta stands, all 10,000 feet of it, by itself in Northern California’s rural Siskiyou County. Unconnected to any mountain range, its loftily dormant volcanic eminence towers over the surrounding country. Perpetually snowcapped, it boasts no less than seven named glaciers and a number of anonymous ones. Such poets and writers as Joaquin Miller, John Muir, and Theodore Roosevelt were awestruck by its beauty.

Mt. Shasta was seen by its indigenous neighbors as a sacred place, the dwelling of one or more of their various deities. In some Indian myths, the explosion of Oregon’s Mount Mazama (now Crater Lake) about 5700 BC was seen as the victory of Shasta’s heavenly resident over his rival to the north. From time immemorial to the present, Shasta has served as a ritual center for various Indian religions. This role has carried on in ways that might have surprised the original devotees.

Pa and Ma Ballard’s “Great I AM” group attaches great importance to Shasta; so do their imitators such as the Church Universal and Triumphant. (The latter is also justly famous for Calabasas’s famed Inn of the Seventh Ray). These two groups claim to be in touch with a group of Ascended Masters led by the deathless Comte de Saint-Germain. The reason why both groups (sort of the Sunnis and Shia of Ascended Master teachings) revere Shasta is because the messengers from on high seem to use it as a sort of port of entry for these lesser regions. But for California, this is about as exotic as a Methodist summer camp. Far more awaits the seeker on these enchanted heights.