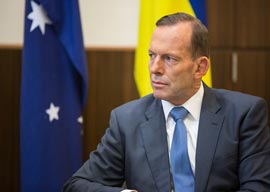 Readers of Taki’s Magazine must be itching for a bit of good news in the midst of all the rubbish being talked about the refugee crisis in Europe. Well, here it is: Australian prime minister Tony Abbott is now the first leader of the anti-Assad coalition to admit that Western intervention in the Syrian civil war was a massive cock-up.

On paper, Abbott is still opposed to Assad. Fair enough: Bashar’s a bit of a bastard. But Abbott’s been forced to admit what the rest of us have been saying for years: Humanitarian intervention is seldom humanitarian. A sensible minority”many of whom read and write for Takimag”have consistently maintained that the “moderate Syrian rebels” were an idealistic fiction. We pointed out that Bashar al-Assad’s government is remarkably liberal so far as Middle Eastern states go. We said that loosening his grip on the country would lead to an explosion of Islamofascism in Syria that would envelop the region.

“I guess the plan was to wipe out ISIS and then go back to decimating Assad’s loyalists, leaving Syria to the ten or fifteen people who didn”t pledge themselves to either cause.”

At first, the piss-and-vinegar interventionists called us Islamophobic for stating the painfully obvious. Remarkably, they continued to do so even after the so-called moderates began pledging their allegiance to al-Qaeda. But when the remainder of the unaligned Syrian opposition coalesced into the Islamic State, they got rather quiet. I guess the plan was to wipe out ISIS and then go back to decimating Assad’s loyalists, leaving Syria to the ten or fifteen people who didn”t pledge themselves to either cause.

Not anymore, it seems.

Abbott’s nothing if not an immigration hawk. Before he took office, Australia’s center-left Labor governments refused to enforce her border-control laws. Aside from any hazard this arrangement posed to the Australian people, Labor’s non-approach to national security was even crueler for those would-be illegal immigrants: An estimated 1,000 would-be illegal immigrants died at sea between 2007 and 2013.

The cornerstone of Abbott’s 2013 campaign was a promise to halt people-smuggling ventures from Southeast Asian ports. Operation Sovereign Borders (OSB) directed Aussie border authorities to either turn back vessels unlawfully bound for Australia or detain the passengers at processing centers in Nauru and Papua New Guinea. The logic behind OSB? When you don”t stop illegal immigrants from coming to Australia, you encourage people to illegally immigrate to Australia. (Breathtaking, I know.) Within four months of Abbott’s election, OSB halted illegal arrivals by boat completely, and but for one successful landing in July 2014 he’s held it at zero. What’s more, OSB’s proven a successful deterrent: By escorting all unlawful vessels either back to their country of origin or detaining them at an offshore processing center, Abbott’s government has drastically reduced the death rate among undocumented migrants.

But when the Aussie public went absolutely mad over the photograph of poor Aylan Kurdi, he agreed to bring in 12,000 refugees from Syria. Wisely, he’s prioritizing Christians, who face the most brutal persecution at ISIS” hands. No doubt realizing that Assad was the best friend Middle Eastern Christians have had in decades, Abbott’s going about reversing the damage done by coalition intervention by paving the way for Assad to reclaim Syria. No doubt, too, he’s assuming this will end the refugee crisis so he can get back to his good work of securing Australia’s borders. And no doubt he’s right.

It’s a damn shame that it took the Syrian civil war, the Islamic State’s reign of terror in the Middle East, and the attacks on Porte de Vincennes and Martin Place by ISIS sympathizers for anti-Assad types to start coming round. At this stage, though, all we can really do is begin rolling back to the status quo ante, and this appears to be a big step in the right direction.