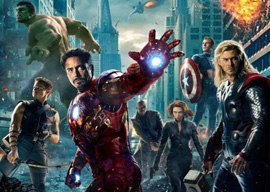 It was a bad weekend for Nicolas “The American in Paris“ Sarkozy but a great weekend at the global box office for what the French sniffily call l”empire amÃ©ricain‘s hyperpuissance.

The Marvel Studios movies, going back to Downey’s triumphant performance in 2008’s Iron Man, have illuminated how America’s dominance of international pop culture is intertwined with its military might.

In Bryan Singer’s 2006 Superman Returns, the Man of Steel’s catchphrase “truth, justice, and the American way” was toned down to “truth, justice, all that stuff” to avoid offending more tender sensibilities at home and potential ticket-buyers abroad. But from Iron Man‘s opening scene depicting reactionary weapons-maker Tony Stark and some GIs rocking and rolling across Afghanistan’s plains, Marvel has been confident in the box-office brawn derived from the military-industrial complex’s renown for ass-kickery.

Today’s youth aren”t really into rebellion and outlawry. They fantasize about organization”the more awesome, the better.

Perhaps all those The Making of… documentaries included on DVDs inculcated a love of military precision. A movie set is a sort of pretend military operation with the director as the commanding officer. (But you can”t enlist unless your uncle was in the union. And what neither the recruiters nor the documentaries tell you is that the main sensation of both is Hurry Up and Wait.)

Much of The Avengers, therefore, takes place on a Nimitz-class aircraft carrier that flies. It’s not powered by some cost-effective superpower, either. Instead, it hovers due to colossal helicopter rotors that look like a project on which Lockheed Martin would run $500 billion over budget.

Whedon’s fictitious Helicarrier is equipped with J-35 vertical landing fighters, a quasi-real warplane first seen in the 2007 blockbuster Live Free or Die Hard, but which remains, five years later, still in flight tests despite its estimated $1.5-trillion lifetime cost. Every Pentagon gizmo in The Avengers had me scratching my head and wondering: How much am I going to be paying in taxes for the rest of my life for this boondoggle?

I often confuse Whedon with J. J. Abrams (Star Trek), the twin kings of Comic-Con. Both sci-fi auteurs are gigantically energetic storytellers who grew up in showbiz. (Whedon’s grandfather was a Leave it to Beaver writer.)