The Ballet of Death 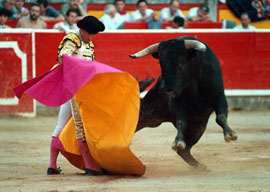 The bullfight is the ballet of death.

I have witnessed the event firsthand more than once. Though attended with mirth, as seconds surrender themselves the air constricts on awaiting the inevitable. As everyone in combat has a stratagem until the initial blow, spectators are apprehensive until first blood. Moments pass as all the unacquainted prickle into a pervasive unease. One wonders whether romance is best left in gossamer.

In executing the bullfight, one must practice a finely choreographed step. Any false beat in the tempo or misplaced footfall, and there is a brawny shoulder or sharpened horn to make quick correction. It is a delicate synchronicity of precarious existence.

After the entry parade come the picadors on their steeds. They act first, as this is how the practice began, hearkening to the venerable nobles. Lances pierce the bull’s neck sinews, allowing for an encounter of equals.

“The bullfight is no sport. It is art.”

Then come the banderillas, seeming needlessly brutal and barbaric, wielding daggers with sashes on one end and streams of the sanguine and the sanguinary on the other.

It continues for a short eternity. Soon brackish pools congeal at various plots in life’s sandy circle. Stained and smeared wood instruments litter the arena. Things which once seemed so bold now lie broken on the ground or lingering in the bull.

Follows the toreador. Mad twirling and angry animal compete in their beautiful ostentation. Throughout the contest, which is not with the brute himself, the participant is esteemed according to technique and bravery far more than whether the beast is overcome.