The Basis of a Real Conversation 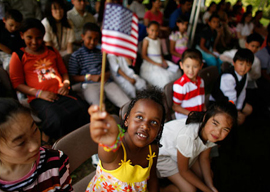 Of all the comments I read during the brouhaha over my April 5th Taki’s Mag column, one in particular stuck in my mind. I forgot to bookmark it and can’t recall where I read it, so I’m working from memory here. The gist was:

Multiracial societies are so boring. People waste so much time talking about race. In a monoracial society, that time is freed up for talk about money, sport, sex, politics….

I think it’s a good point. An American or a Brit might justifiably cast the occasional envious glance at Japan, Iceland, Hungary, Uruguay, or any of the other nations whose citizens can pass from one year’s end to the next without attending a diversity sensitivity training seminar, watching ethnic-leadership hucksters whining on TV about “discrimination,” or having his intellect insulted by jurisprudential preposterosities such as “disparate impact.”

The occasional envious glance is all we can afford, though. The USA has been multiracial from the start, and we have never had any choice but to make the best of it, unless you think the American Colonization Society had realistic hopes of success (I don’t). Black and white Americans are stuck with each other, like an unhappy married couple in a Strindberg play.

“We Puritans prefer to think that realistic candor will ultimately deliver a better result”a more stable and unified society”than all the formulaic lying.”

(Britain is a different case: In one of history’s greatest acts of collective folly, the Brits voluntarily opened up their unique, ancient, introverted national culture to a rabble of Third World sadists and cultists. They are now choking on their folly, and it’s hard to have much sympathy.)

How has the USA done at making the best of it? Not too badly, I’d say, at least in the past few decades. You can even make an argument that the point we’ve arrived at is, in the many-dimensional space of social possibilities, a local maximum.

To puritanical souls such as myself, though, who are constitutionally unable to see the emperor’s new clothes, the current settlement”if it is a settlement”is irksome because it rests on a pack of lies: the lie that poverty causes crime, the lie that white people’s malice causes black poverty, the lie that race is a mere “social construct” with no biological reality, and so on.

We Puritans prefer to think that realistic candor will ultimately deliver a better result”a more stable and unified society”than all the formulaic lying, especially as advances in the biological sciences uncover more and more unwelcome truths to vex our self-deceptions. This is the point of view I myself have tried to propagate, plainly with only mixed success.