The Beginning of the End of Empire 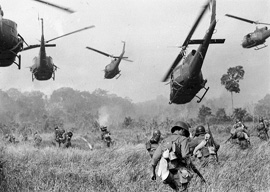 It began late in the afternoon of March 13, 1954. The great Battle of Dien Bien Phu had finally begun. 105mm and 75mm howitzers and 120mm mortars rained down from above. Ten thousand French troops were defending a valley ringed by hills crawling with close to 30,000 Vietnamese. The French commander was Christian de Castries, the flamboyant general who had named the nine outposts after his various mistresses: Beatrice, Huguette, Elaine, Isabelle, and so on. Most soldiers in the French Foreign Legion were German; the officers were all French. The first to die was major Paul Pegot, who called for artillery support barely 200 yards from his command post at Beatrice. A Viet Minh artillery round hit him as he put down the telephone, killing him instantly along with his entire staff. Another shell tore open the chest and ripped the arms off Lieutenant Colonel Gaucher, who had rushed in to take over. Their two leaders gone, the men had to fight on their own. All but 200 out of 750 died. They took 600 Vietnamese with them.

The battle continued for another seven weeks. On May 7, 1954, it was all over. De Castries refused to raise the white flag but ordered the Legionnaires to stop shooting as the Viets came storming in. For the first time in colonial warfare, Asian troops had defeated a European army in a fixed battle.

A hushed French National Assembly chamber heard Premier Laniel announce the defeat. Women deputies sobbed and Paris declared all theaters and cinemas shut. Television was canceled and the radio played only classical music. Far away in Washington, DC, a somber Secretary of State John Foster Dulles was busy drafting a statement praying for peace in Indochina and urging the aggressors to purge themselves of their aggression for the coming Geneva Peace Conference. Dulles had played his cards well. He had agreed to attend Geneva mostly as an observer, leaving the Soviets and Chinese to deal with the defeated French and victorious Vietnamese. Dulles had refused to give air cover to the French in Dien Bien Phu, although the first Americans to die in Indochina were two American pilots flying for the money. The Eisenhower Administration had been very generous with armaments but had refused direct military intervention to save the colonial French skin. According to Dulles, the first domino had fallen. The French presence in Indochina was a busted flush. It was time for Uncle Sam to stop the red tide.

Throughout the seven-year war of independence from French colonial rule, Ho Chi Minh had eyed the Americans with suspicion. What Uncle Sam preached and what he did were two different things. America was for democracy, an unknown institution in Indochina, but it was helping the French throughout. Ho was a communist who established a totalitarian military regime with no questions asked once he became North Vietnam’s boss. Uncle Sam’s excuse was the domino theory. Communism, unless checked, would overrun Thailand, Cambodia, Laos, and even threaten Indonesia and eventually Australia and Japan. The theory was good on paper, but like most such theories, it was not worth the papyrus on which it was printed. Easing the French out from South Vietnam, the Eisenhower people poured into Saigon. They trained, advised, and picked up the bill. The French had lost a war fought 5,600 miles from home. The Americans had the will and the money to show the little yellow bastards all about American ingenuity.