The Best Films That the Oscars Ignored 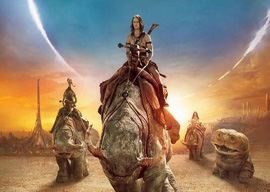 This evening is the annual Academy Awards telethon for Harvey Weinstein, and the Academy has again decided to nominate every dull, derivative, and overly melodramatic film appearing in theaters the past twelve months.

There have been over three hundred films about Lincoln. Dozens for the French Revolution, even in song. The same for token films about impoverished empowerment. Endless are the entries of “based on a true story” terrorist capers. In fact, everything else nominated is either passÃ© or redundant.

The following is a guide to a few films of merit the Academy ignored.

John Carter is an excellent picture. It was, however, considered a colossal flop and is expected to be a $200-million loss. At its premiere the movie was shown in 3D, IMAX, and ordinary versions.

When I finally viewed it on the small screen it was exhilarating: imaginative and interesting yet with dramatic action. It is no great philosophical film but is quite fun and enjoyable all the same, much as Raiders of the Lost Ark was before auteurs raised it to ridiculous cult status.

“All these films are highly entertaining and at some points brilliant.”

It features a handsome brave hero, a beautiful intelligent princess, and a clever resolution which rewards nobility. While there are plenty of green Martians in the film, few other minorities appear.

Years ago a disgusted executive said of The Rocketeer (also produced by Disney) he never wanted to hear another parent complain they couldn’t take their children to the cinema for a pleasant afternoon because when they had the opportunity absolutely nobody went.

No, there is not intelligent life on Mars (at least not now). But the fact that so many patrons turned up their affected noses at the prospect of a little nostalgic diversion is a good indication there isn’t much intelligence left here on Earth, either.

Mad Cow (misnamed Branded in English) was also universally derided by critics. In a cursory reading of comments some of the most common derogatory phrases were that the movie was “illogical” and “difficult to understand.” Given the plot revolves around late-stage communism colliding with late-stage capitalism and the counterintuitive (often counterproductive) actions endemic to modern society, this would seem to validate a viewing.

The central story concerns a young man from Russia maturing into adulthood during the first post-Soviet generation. Anyone who experienced this transition can attest it was decidedly a mixture of hard reality and surreal fantasy, which the film expertly captures. Far from being “pretentious,” as certain detractors claimed, it conveys the absurd dichotomy of heavy drama and light fare at a pace that can produce vertigo.

Cloud Atlas was another poorly rated but well-made film, though its plot is somewhat difficult to dispassionately assess. The movie is absolute and undiluted propaganda of the highest order. Mostly it deals in the sorts of dogma intelligent people disdain”all races are of equal ability in all things, every social degeneration is actually societal evolution, and the only distinguishable factor in humanity is separating people with “bad” souls from people with “good” ones.