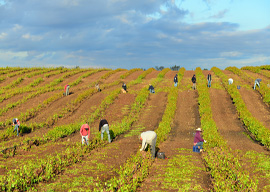 NEW YORK—Wherever you stand on the Wetback Issue, you’re no longer allowed to say the following sentence:

“Mexicans only take the dirty jobs that Americans won’t do.”

I’ve been hearing this for thirty years. Enough. It’s not only untrue, it’s so easily disproven that you don’t need Keynesian economics or Milton Friedman economics or even the economics they taught in that glossy college freshman textbook that had the hokey supply-and-demand graphs in it. You can basically blow this out of the water with Pre-Kindergarten Economics.

Principle Numero Uno: If there aren’t any Mexicans to pick the lettuce, that doesn’t mean the owner of the crop lets the lettuce rot in the field.

What happens is one of two things:

A. The cost of picking the lettuce goes up. Instead of paying the Mexicans a dollar an hour, you pay some local rednecks two dollars an hour.

Or, much more likely…

B. You hire some Americans that you normally wouldn’t hire because they’re a pain in the ass to work with.

For example, I have a friend who’s a United States marshal, and one of his duties is to work with people in the federal Witness Protection Program. Over and over again, the protected witness gets a new location, a new house, a new identity, and then spends the first couple of years going to a community college or some other training program to develop a skill—since their prior skills might have been either bank robbery or serving as a punching bag for a Mafia husband—and then when it’s time for the final step, nobody will hire them. The marshal is required by law to tell the potential employer that the new hire is a protected witness with a fake identity—and most bosses say, “No, thanks.”

But believe it or not, those are easier placements than the typical ex-convict recently out of state prison on, say, an aggravated assault charge. One of the cruelest things we do to prisoners is pump them up with the idea that, if they educate themselves in prison and learn a trade, they will be able to work when they get out. This is a lie. They probably won’t be able to work, because, aside from typical job-interview demerits like too many nasty facial tattoos, that felony conviction automatically eliminates them on most application forms. As late as the ’70s, in Arkansas, it was considered a badge of civic pride if you hired a couple of convicts and a couple of blind, deaf, or wheelchair-bound citizens at your business—which is why we didn’t use the term “hardcore” for any of the unemployed.

Would it be a stretch to say all these convicts have been replaced by young able-bodied illegals? I don’t think so.

But it gets worse. Ex-cons are not even the most forsaken job applicants.

Single moms with two or more children—forget about it.

“Get rid of the illegal Mexicans and see how fast that wage goes up to $15 on its own, no government intervention needed.”

These women apply for the lowest-paying jobs in America—manicurists, theme park employees, food servers, packagers at mailing centers, laundry workers, dishwashers, cafeteria workers, maids, tollbooth clerks—and constantly lose out because they have all these special needs. They need flexible hours. They need weird schedules. They need time off on short notice when their kids get sick.

In other words, they’re a pain in the ass. Much easier to hire twelve highly motivated Mexicans in their early 20s who are too scared not to show up for work.

Last week a company in Willow Grove, Penn., paid $95 million in fines for hiring illegal immigrants. Asplundh Tree Expert Company has contracts all over the U.S. to trim trees, especially the trees around power lines, and in any given year they hire about 30,000 workers. It’s crappy, dangerous work. You climb up on ladders with chain saws right next to dangerous electrical lines and then you feed tree limbs into a wood grinder on the back of a truck. Apparently the reason the fine was so high is that every time Homeland Security caught them hiring illegals, they would fire the guy, then rehire him the following week when he showed up with a new fake identity card.

Why would they go to such lengths? Because if they had to hire Americans to run all over the country trimming trees, the hourly wage might go up.

And this leads me to…

Principle Numero Two-o: There’s no genetic difference that makes a Mexican more likely to love horrible jobs than an American.

They’re not having folk festivals in Mexican villages in which all the young mothers pray to the Aztec gods to give them jobs cleaning toilets in Akron.

There’s no special species of peyote being harvested in the Sierra Madres that causes Mexican men to crave plumbing-assistant gigs in Tucson.

When American Dad comes home and tells his feckless 17-year-old son that there’s an opening at the Dairy Queen as an assistant line cook on the grill—basically the guy who peels potatoes, sweeps, and takes out the trash—his reaction is no different than a Mexican teenager’s in the same situation.

The only difference is the stakes. The American high schooler loses his car keys and his access to the Sony PlayStation when he refuses. The Mexican kid encounters the everlasting disapproval of his grandmother in Tampico, which is where most of his wages are going to end up. He takes the job at the Dairy Queen.

If there were some kind of “anti-dirty-job” DNA code in the rear brain lobe of the American worker, then we would have no sewer inspectors, no cattle wranglers in slaughterhouses, no garbage collectors, no cell-tower repair guys, no prison guards, and certainly no lumberjacks. But since all the jobs on that list are either government hires or closely regulated industries—so that it’s impossible to hire illegals—the wages are decent. They’re not great, they’re just decent. And the reason they’re decent is that there’s a “dirty job” premium added to the minimum—enough to get a middle-class American to do the work, as opposed to a desperate Mexican.

Because desperation is the economic ingredient we’re dealing with here. If you say, “Those Mexicans do the jobs Americans won’t do,” what you’re really saying is “We should continue to rip off these foreigners because they have no choice and they have no way to go to court and stop us.”

Discovery Channel had a reality show called Dirty Jobs on which the host would try his hand at what were considered the worst jobs in the world—roadkill cleaner, pig farmer, sewer inspector, coal miner—but in my opinion they neglected the dirtiest one of all:

Housekeeper in any mom-and-pop motel on the interstate.

Almost all these jobs are done by women, and almost all the women are foreign-born. Every time they knock on a door, it’s the equivalent of a high-pressure traffic stop by a police officer. First they have to determine if anyone is in the room, if the person is naked or not, if the person is drunk or not, if the person is angry or not, and then, if the room is empty, whether there’s anything disgusting on the sheets, in the trash can, in the shower, or in the toilet, if the smell is bearable, and if this is the day—it’s always in the back of their minds—that they will discover a dead body. The work itself is both tedious and backbreaking, and if they don’t do it perfectly, they’re more expendable than a drug-addled carnie.