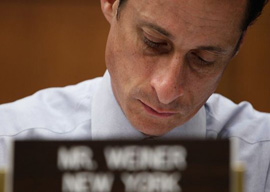 Examining New York politics is like dipping a ladle into the sewer: Any random sampling will yield nothing but toxic shit water.

New York City’s 2013 mayoral election is seven months away, but the stench of New York politics is already intense enough to make you gag.

Early this month, State Senator Malcolm Smith was charged with bribing his way into the mayoral candidacy. On page 27 of the Criminal Complaint against Smith is a taped conversation where he offers to help out someone’s kid in exchange for allowing Sen. Smith to be reborn as Mayor Smith.

SMITH responded, “You know what you do? Tell him, tell him ‘I got a kid in Albany that needs to be born. So, when you birth him, when you birth my child up in Albany, I”ll help you with your kid.””

Assembly Speaker Sheldon Silver claims the Smith scandal and the seemingly endless other examples of recent corruption are simply a matter of a few “rotten apples.”

Along with Smith, three other “rotten apples” were arrested as accessories. Last summer Smith told lobbyists:

The longer you wait to get in…the more it will cost you and if you don’t get in at all, then it will be painful after November, after the Democrats win the majority.

In February, he was accused of blowing $100,000 in campaign funds on himself.

“Political corruption in New York”both the city and the state”didn”t end with Boss Tweed and Tammany Hall. That whole scandal was more like the ribbon-cutting ceremony.”

Smith was involved in the “New York State Leadership Crisis” of 2009, which occurred shortly after the Democrats won the upper chamber for the first time in four decades. A “Gang of Four” senators refused to recognize Sen. Smith as their leader. The gang became known as the “Gang of Three” after Queens Rep. Hiram Monserrate split to do a curious deal with Smith that included appointing him the chairman of the Consumer Protection Committee. Ex-cop Monseratte was facing serious jail time for allegedly slashing his girlfriend in the face with a knife but was acquitted around the same time the deal was struck. It was now up to Sen. Pedro Espada to run the Gang of Three’s bizarre coup, but his rap sheet was so chockablock with allegations of embezzling, corruption, and tax fraud, he appeared to spend more time in court than in office. Ultimately, the Gang of Three bungled their mutiny and the Democrats lost their majority.

Smith’s rotten-apple career and the fermented cider in which it stews isn”t an exception in New York politics. It’s the rule.

Bottom line…if half the people up here in Albany were ever caught for what they do…they…would probably be (in jail). So who are they bullshitting?

When US Attorney Preet Bharara revealed the corruption charges against Smith and his cronies he was so jaded by it all he said, “Every time a politician is arrested in New York it should not feel like a scene from Groundhog Day. Yet it does.” This is the OB/GYN through which our mayors are born.

Political corruption in New York”both the city and the state”didn”t end with Boss Tweed and Tammany Hall. That whole scandal was more like the ribbon-cutting ceremony.

In March, Assemblyman William Boyland, Jr. was charged with embezzling.

That same year, Assemblywoman Diane Gordon was jailed for bribery.

Spitzer told us he was going to clean up Albany, but even he got caught with his pants down. You”d have to be blind not to see how corrupt it all is. Fittingly, Governor Paterson is both corrupt and blind.