The Big-Screen TVs of Turtle Island 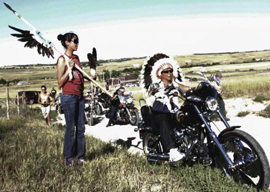 “Why is there ALWAYS a big screen tv?”

Ten months ago, New Democratic Party—that is, socialist—Member of Parliament Charles Angus was campaigning to keep right-leaning Sun TV off the airwaves, calling it a threat to “human health or public safety.” Yet he was in their Ottawa studios on Friday, sucking up those precious first five minutes of airtime to push his latest cause: the “shameful” living conditions on the Attawapiskat reserve.

Angus has literally traveled a long way since I met him in the ’80s. He was “Chuck” then, a punk musician who “ran” (although I doubt that’s the acceptable anarchist term) Toronto’s Catholic Worker house. When thankless voluntary poverty got stale, Angus moved back up north to Timmins, ran for public office, and won. I may be an evil, warmongering, right-wing capitalist, but this is Canada, so the former anarcho-pacifist now makes more money than I do. Living in North Bay’s wilds and all, he probably owns more guns, too, even though his party wants them banned. He’s also a “devout Catholic” who voted for gay “marriage.” (That’s why I could never be a progressive. Too much damned “nuance.”)

Aikin gravely warned viewers that the footage they were about to watch “may be disturbing,” and it was—but not for the reasons he or Angus supposed.

“They gave us cigarettes. We gave them booze. I call it even.”

Shot by Angus, the video showed First Nations families living in shacks. Viewers were told that residents were forced to use buckets for toilets.

Angus’s voiceover echoed the statement on his official website:

Temperatures have dropped 20 degrees and are likely to drop even more very soon. Families in makeshift tents and un-insulated sheds with no hydro [electricity] or water are facing immediate risk.

Perhaps aboriginal televisions run on some mystical power other than electricity, because I noticed that the numerous children in two of the shacks were staring at working TVs.

And I’m pretty sure Attawapiskat residents already know about Canada’s winters. After all, as we’re never permitted to forget, this land comprises the ancestral First Nations territories of “Turtle Island,” with which these deeply spiritual peoples boast a symbiotic bond no white man could possibly comprehend.

The fact is, all this “shocking” footage of “life” in Attawapiskat was virtually indistinguishable from that taken in Natuashish in 2003, when suicidal, gas-huffing Innu teens and their shiftless parents vandalized their “own” (that is, taxpayer-funded) new homes. (That was after their second relocation; they’d done the same thing at their old settlement.)

Commenters at McMillan’s blog chimed in with similar situations they’d witnessed in their travels across Canada:

Some years back, the [Newfoundland] govt [sic] built modern, warm bungalows in Nain, I think it was. Within days, people had torn out the main living room window and the back patio door from some houses so that they might drive their snow machines up into the house and unload their game, wood, etc.

Of course, the gaping holes meant snow getting into the houses.…And so you’d have an $80K home that would last 100 years if maintained properly being condemned five years after its construction.