The Blacklash Against Stacey Dash 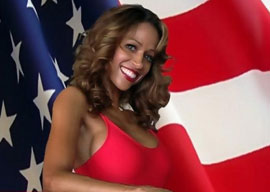 Actress Stacey Dash, star of Clueless, is a black woman from The Bronx who says she voted for Obama in 2008. After she recently Tweeted that she planned to vote for Romney, American blacks and their clueless white enablers summarily revoked her blackness for perpetuity. Since her political sympathies have now been deemed insufficiently nappy, she is also in the process of being permanently de-sistered.

Making matters worse by possibly suggesting that she was whoring herself out to the elusive “White Man,” the former Playboy model accompanied her Tweet with a photo of herself in a red bikini standing in front of an American flag and behind some sort of giant red phallus emblazoned with the letter “R” on it. It may have stood for “Romney” or “Republican,” but to those who rose en masse to antagonize her with a flurry of Hate Tweets, it may as well have been the first letter in “Race Traitor.”

Twitchy, a conservative-leaning Twitter distillery, aggregated some of the more egregious responses into categories where Dash’s critics accused her of being an Uncle Tom (an Aunt Tamika?), of not being black enough (with her grey eyes and pointy nose, it’s obvious she has some cream in her coffee), and where they encouraged her to kill herself.

“Obama’s been a bitter spoonful of medicine for anyone who was foolish enough to believe he’d usher in a post-racial era.”

Among the more charmingly incisive responses:

Stacy Dash is an oreo, white man dik hopping uncle tom ghetto gagger may she get cancer twice and die once.

U can’t never come back over here! You’s a house nigga now

She’s an indoor slave. You know that, sis….You ready to head back to the fields, jiggaboo?

Still won’t make you white. I bet Mitt will use your back to keep his feet warm. House Negro.

So Stacy Dash buck tooth ass really voting for Romney!! Bitch you black and Mexican …do you think yo bloodline gone survive or something

Many of her politically energized and obviously erudite foes, who, if their avatars are to be trusted, are primarily dark-hued, expressed concern that Dash had abandoned her brethren and sistren in the cotton fields in order to enter the plantation house, where she will receive extra helpings of corn bread, sweet tea, and mustard greens for savagely betraying her race.

Claiming that she was “saddened and shocked” by the response, the multi-racial Dash (she’s apparently a creamy mocha potpourri of African and Mexican bloodlines) appeared on CNN to speak with the incurably ineffectual Piers Morgan. “I chose [Romney] not by the color of his skin, but the content of his character,” she said with a decidedly non-ghetto inflection as Morgan tried not to stare at her boobs. She also said she had received a supportive phone call from Republican VP candidate Paul Ryan, who is known to have dipped his hand in the chocolate-chip cookie jar during college.

To their credit, black entertainers-cum-politicos such as Whoopi Goldberg and Russell Simmons said the blacklash had gone too far. To his discredit, the whiny and eternally aggrieved TourÃ©, who looks sort of like Harpo Marx in blackface, alleged that it was all a manufactured controversy intended by the ever-evil and racially bloodthirsty right wing to distract attention from REAL racist incidents such as the Trayvon Martin case, even though when the prickly facts started leaking out, there apparently was nothing racial about the Trayvon incident”only the reaction to it. It seems never to have occurred to TourÃ© that he’s paid by the ever-present and racially obsessed left-wing media to distract attention from REAL racially motivated incidents that are happening all the time.