The Book: An Elegy 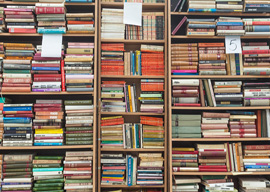 I”m nine months out of chemotherapy and getting back up to speed now. I started reviewing books again: just did Roger Scruton’s latest for the upcoming American Spectator, a couple on different topics for future issues of The New Criterion, and the new Coolidge biography for VDARE.com (this week, unless I miss the deadline). I get all the Coolidge books; I expect to get the next one for review any day now. You write a book about Calvin Coolidge, I’m your reviewer. I don’t mind: I let myself in for it.

All of which has me thinking about books. The thoughts are not happy ones. I have a house full of books. After this recent close encounter with Azrael, I have been glumly pondering the fate of all my books when I finally turn in my lunch pail. For sure the kids won’t want them. Though they are bright and capable, their souls belong to the gadget age; neither reads books. Probably my books will just become landfill.

Who does read books anymore? Well, some people do. A few weeks ago I had lunch with a senior editor at a major publishing house. When I asked him how the book business was doing, he said things were…OK: the fiction end nicely propped up by mass-market storytellers catering mainly to the female market, nonfiction likewise by human-sciences-lite authors such as Malcolm Gladwell selling to air travelers. (When I got home I checked the fiction side. What was Mrs. Derbyshire reading? This was the answer. The authoress, whom I confess I had never heard of, is doing pretty well.)

But then a few exchanges later, my lunch companion observed: “Books don’t cause a stir anymore.” Being naturally argumentative, I tried to think of a counter. Nothing fictional came to mind, but I said I thought Steven Pinker’s last had been much discussed. Likewise Charles Murray’s last. “Nah,” said my editor. “A brief buzz in high-end outlets, that’s all. Not like it used to be.”

On reflection, he’s right”as he darn well ought to be, given his experience and seniority. Interesting and unusual quality books, fiction and nonfiction alike, used to make a huge splash, and that “used to” is not so long ago. In 2001 everyone seemed to be reading McCullough’s biography of John Adams; and before that, Charles Frazier’s novel Cold Mountain. A few years earlier, it was Patrick O’Brian’s sea stories if you wanted to keep your end up at dinner parties”I read the first 17 of them seriatim. (And a biography to boot.) Even further back, in the 1970s, you could get a conversation going with lower-middle-class cube jockeys about James Clavell’s Shogun or Julian Jaynes’s Origin of Consciousness. It’s been a decade and a half since I worked in a business office, but I feel pretty sure they’re not talking about books around the water cooler nowadays.