The Borders of Empire 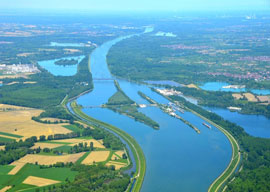 I was wondering why Russia chose to hold its Winter Olympics in the Black Sea beach resort of Sochi, which is almost as far south as you can get in that notoriously northern land.

And that got me thinking about borders in general. African governments are always complaining that they inherited unnaturally straight national boundaries from colonial administrators who didn’t take into account the complicated ethnic realities on the ground. But does anybody know the ideal way to draw borders to maximize peace and prosperity?

It turns out that the locations for the Winter Olympics offer some insights into this long-standing question.

The short answer to “Why Sochi?” is that a mild climate is nice. Sochi, where the average February high is a quite tolerable 51 degrees F, is even warmer than the 47-degree average in Vancouver, which was Canada’s site for the 2010 Winter Olympics.

Indoor ice-rink events such as skating are held in the seaside city, while spectators can head up into the mountains for the outdoor snow events. A handy rule of thumb is that temperature drops about 3.6 degrees Fahrenheit per 1,000 feet of elevation gained. Thirty miles inland, the Krasnaya Polyana ski village is at 1,800 feet elevation, while the top ridge of the Rosa Khutor ski resort in the Caucasus Mountains tops out at over 7,600 feet.

A more amusing possible reason why Vladimir Putin and his pals are lavishing a purported $50 billion on subtropical Sochi and its adjoining alpine resorts is that they want a world-class southerly second home paradise within Russia in case any complications involving international law someday prevent them from sojourning in luxury watering holes abroad. While some previous Russian oligarchs are currently holed up from the supposedly long arm of the law in the owners’ suites of major-league sports franchises in London and New York, the current top dogs in Russia don’t expect to be as warmly welcomed by the NATO countries as their 1990s predecessors have been. So they’re building their own four-season ocean and mountain resort.

Yet leaving the idiosyncrasies of Great Power rivalries aside, it’s worth noting that it’s common for ski resorts to be located at the southern edge of countries.

“Does anybody know the ideal way to draw borders to maximize peace and prosperity?”

For instance, the 1936 Winter Olympics were held in the extreme south of Germany. Garmisch-Partenkirchen is at the base of Germany’s tallest mountain, the Zugspitze, which delineates the border between Germany and Austria.

Similarly, the Polish plan for the 2022 Winter Olympics would be based in Krakow in southern Poland. It would use the Zakopane resort in the Carpathian Mountains on the southern edge of the country and even spill over into Slovakia. Another 2022 contender is Almaty on the southern fringe of Kazakhstan.

Even more generally, ski resorts are often located near national borders due to borders frequently being drawn along the crests of mountain ridges. For example, Lviv in far western Ukraine near the Carpathians is making a long-shot bid for the 2022 Games that has become even more unlikely due to the minor-league proxy war between the US and Russia being fought out in the country’s streets. (Sadly, the geographically flat Ukraine is notoriously lacking in other natural defenses besides this short stretch of the Carpathians.)

Notoriously, the 1984 Winter Olympics in Yugoslavia were held in the border city of Sarajevo, even if nobody had noticed yet that it was going to be a border city. It is now divided between the de facto Serbian Republic of Srpska and Bosnia (which is currently undergoing its own rioting).

One tempting answer is along major rivers. After all, if you glance at a map, you’ll notice that big rivers tend to be long and fairly linear, just like you hope your ideal border would be.

Moreover, wide rivers are more militarily defensible than flat land. That’s why Warsaw Pact contingency plans for invading Western Europe assumed that the Rhine had to be reached to forestall a NATO counteroffensive.

The peacetime political problem with using navigable rivers as borders, however, is that they frequently separate people who don’t want to be separated. For most of history, land transportation was painfully slow. A major river, in contrast, was a natural highway, so people living on both banks tended to share many things”such as language”in common.

The Rhine was long looked to by victorious French statesmen such as Napoleon and Clemenceau as the natural boundary between Romance-speaking and Germanic-speaking Europe. The problem with this plausible-sounding conception was that while the Rhine more or less parallels the linguistic border, most of the people actually living on the west bank of the Rhine speak more or less the same language as the people right across the river on the east bank: some version of the Germanic family. Thus the Versailles Treaty’s demilitarization of the Rhineland failed catastrophically when the locals welcomed Hitler’s small army back in 1936.

In practice, mountain ranges, such as the Caucasus between Russia and Georgia, have worked somewhat better as natural borders (which is why so many ski resorts are right at the edge of countries). Being almost impenetrable to water transport, mountain ranges have tended to serve as buffer zones between large lowland populations of different cultures.

Perhaps most successfully, the long, straight, and massive Pyrenees Mountains have served as a difficult-to-dispute boundary between Spain and France. The highest peaks of the Pyrenees aren’t particularly tall (only a little over 11,000 feet), but their lack of low passes in its central range means that France and Spain were less likely to fight wars over ambiguous border regions the way France and Germany clashed so often over Alsace and Lorraine.

Not surprisingly, the Pyrenees, being the southernmost region of France, has numerous ski hills. Conversely, the mayor of Barcelona hopes to hold the 2026 Winter Olympics at a Pyrenees ski resort on Spain’s northern border.

Mountain boundaries have another advantage to statesmen: They don’t have to be previously surveyed. The border can simply be defined as the edge of the watershed.

When Thomas Jefferson bought the Louisiana Purchase from Napoleon in 1803, he had almost no clue where the western boundary of his new Mississippi River basin was. So Jefferson legally defined it as the Continental Divide that, he correctly surmised, had to be out there somewhere. He then dispatched the expeditions of Lewis and Clark, Pike, and Freeman and Custis to go find out what he’d bought.

Similarly, the 1801 treaty between Russia and the Ottoman Empire to the south defined the boundary along the watershed of the Caucasus Mountains that traditionally divides Europe from Asia.