The Boredom of Whoredom 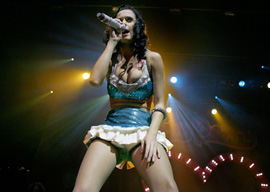 A good woman is hard to find, especially if you’re a rigger. That’s my job, though—I climb high steel in arenas and rig tons upon tons of concert equipment. The more vacuous the music, the more dazzling the doodads. Over the last few months, Katy Perry, Ke$ha, and Lady Gaga came through town with over a hundred tons of gear to hang combined.

I generally steer clear of the performances, but not always. So there I was, my eyes peeled open like Alex from A Clockwork Orange, stifling the urge to puke while suppressing an erection as gaggles of plastic booty shook across the stage.

The girls in the crowd get younger and younger every year, and I have to wonder what effect these cyborg-sexy entertainers have on their little Silly Putty brains. Is teen pop just skillfully marketed boogie-woogie or cynical instruction on how to be a whore?

Katy Perry made musical history last month as the first woman—and only the second artist since Michael Jackson—to have five #1 singles from the same album on Billboard’s Hot 100. Nothing embodies our culture’s progress like a race-morphing alleged pedophile passing the artistic torch to a hot brunette in a Brownie Scout uniform.

“What surprises me today is how deviance has become so mainstream.”

Onstage, Katy Perry maintains this cartoonish, wide-eyed gaze that says, “Oh my, I’ve never done this before!”, but I’m dubious. Her innocent persona didn’t impress record execs in 2001 when she debuted in Nashville’s Christian pop scene as Katy Hudson, so she quickly changed course and moved to LA. As with so many of us, strict Christian morality was stifling for Katy’s pubescent libido—her parents were evangelical ministers who wouldn’t even let their daughter say “deviled eggs.” Perry told Cosmopolitan that she broke away from her religion when she decided that sex could not wait until marriage. “I was like, I don’t know if I can hold that promise because this guy at camp is really cute.” The cult of entertainment doesn’t demand those limitations.

Today, Katy Perry is married to former sex addict Russell Brand and dances around a Candyland gameboard dressed like Bettie Page shooting whipped cream out of her tits. Millions of little girls love her, filling arenas to max capacity. Some of them even got up onstage the other night to sing along:

Ke$ha takes the art of cherry pop to whole new levels. This glitter-smeared 24-year-old star began cutting through the nation’s birth canal when she appeared in Katy Perry’s video for “I Kissed a Girl” and sang backup on Britney Spears and Paris Hilton singles. Her most recent album, Animal, has sold over two million copies—which is astounding in the age of piracy.

Ke$ha’s stage presence is somewhere between Punky Brewster and Tron. The show’s theme was all about fun, fun, fun: drinking, dancing, and doing the nasty. Her audience was relatively small for a platinum-selling star but totally enthralled—mostly teenaged rave twinkies, flamboyant gays, and quite a few little girls with their parents in tow.