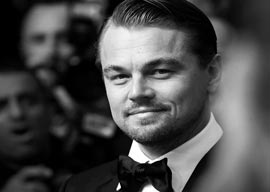 Are American actors in decline due to the rise of better-trained British leading men, as an Atlantic article by Terrence Rafferty contends?

Sure, the younger Brits are more skilled actors on average, but when wasn’t this true? Cary Grant, for example, was the greatest romantic-comedy leading man in Hollywood history. The Brits have tended to be better writers and conversationalists as well.

As William Monahan, the Bostonian screenwriter of The Departed, has observed:

I write drama in the English language…. London matters to me because it’s the center of what I do for a living and has been since Tudor times.

Rafferty’s argument is that under-40 American leading men are struggling because the roles are going to all the well-trained British technicians who can now master American accents.

“The problem with American movie actors these days is less a lack of acting training than it is a shortage of old-fashioned grown-up masculinity.”

And yet it’s easy to forget that actors and actresses of British Isles birth have been well represented in Oscar nominations in every decade since the 1930s. Since the talkies arrived, men born in Britain or Ireland have earned 98 of the 420 Best Actor Oscar nominations, or 23 percent. (I”m lumping the British Isles together in part to avoid political disputes over Northern Irishmen; and because Peter O”Toole, who was nominated seven times, never knew whether he was born in England or the Republic of Ireland.)

Hollywood was a little slower to hire British actresses, but after the immense success in 1939 of Gone With the Wind starring Vivien Leigh and Olivia de Havilland (along with Londoner Leslie Howard as the second male lead), British actresses became about as popular with Oscar voters as British actors. Admittedly, the definitional questions for actresses are a little more complicated than with actors: Leigh, like Merle Oberon, was born in British India; and de Havilland, like her Oscar-winning sister, Joan Fontaine, was born to upper-crust British parents living in Tokyo; conversely, six-time nominee Elizabeth Taylor was born in England to American parents. Counting all of these marginal examples as British, but excluding the Low Countries-born Audrey Hepburn, I come up with the British making up 22 percent of Best Actress nominees since 1930.

Were the British relatively at their best in the 1960s, or were Academy Award voters just more pro-British then?

My vague childhood recollections of the mid-1960s are that Los Angelenos were then absolutely enthralled with all things involving British pop culture, such as the Beatles, James Bond, Julie Andrews in Mary Poppins, My Fair Lady, the Richard Burton”Liz Taylor love affair, and Carnaby Street fashions. Thus, in a 1970 stage production of the 1968 Best Picture winner Oliver! at St. Francis de Sales in Sherman Oaks, I played Oliver Twist’s grandfather, adroitly using my main performing talent, tallness.

I”m not sure why the 1960s were the peak era of British influence on the American entertainment industry. One possibility is that the introduction of transatlantic jetliner routes in October 1958 brought the two countries into closer contact.

Another explanation is that the British had much international prestige built up from being on the winning side in WWII, but they had been too economically exhausted in the later 1940s and 1950s to enjoy it. Finally, a new generation was able to cash in on the previous generation’s accomplishment.

The real change in the quantity of acting prestige has not been among the British. Instead, it is the rise in Oscar appreciation for Australians and New Zealanders, such as Geoffrey Rush, Cate Blanchett, Russell Crowe, Nicole Kidman, and Heath Ledger. They are not, however, the first Hollywood stars from Australia. Errol Flynn, swashbuckling star of the 1938 classic The Adventures of Robin Hood, was from the Australian island of Tasmania, but the Warner Brothers publicity department chose instead to emphasize his Irish bloodlines.

In the distant past, British actors seldom mastered American accents. The talkies hadn”t been invented yet when Cary Grant was an adolescent, so he had only the vaguest notion of what Americans sounded like at his most impressionable age. That no American in history ever talked like Cary just made his performances more absurdly entertaining. Michael Caine and Anthony Hopkins carry on this tradition of Brits who are cast as head of NASA or President of the United States with no explanation for their accents.

But from the British Invasion onward, young Brits have been carefully imitating American intonations.