The Bureaucrat’s Point of View 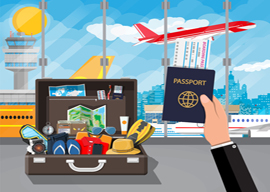 This is a story with a happy ending.

I was driving through France with my wife when suddenly the thought occurred to me that I did not know where my passport was. I do not know how or why it suddenly came into my head, but it did. We do not need Freud to tell us that not all mentation is conscious.

I had seen the passport the day before, that much I remembered, but had quite forgotten where I put it or what I had done with it. I stopped the heavy-laden car; it was not in the bag in which it should have been and where I normally put it. With mounting anxiety, my wife and I searched through what we thought was everything, but still could not find it. Fortunately, since we lose things in roughly equal proportion, we do not reproach each other for our absentmindedness. We phoned the hotel we had stayed in the night before, the restaurant we had eaten in, and the police station and mairie of the little town, but no one had seen it. The wretched thing had disappeared; perhaps it had fallen out of my pocket. I felt almost as if I had ceased to exist as a real person.

“Bureaucrats are themselves so oppressed by bureaucracy that their only way of finding relief is to make others suffer like them.”

It is amazing how a small circumstance can in a trice overturn a mood from one of equanimity to one of anxiety and irritation. What most upset me was the thought of having to deal with the British bureaucracy in order to obtain some kind of travel document or other. I could just see in my mind’s cinema the drab room in the consulate where a minor official, who hated his work and was thoroughly bored with and disgusted by the procession of incompetents, liars, and con men who day after day appeared before him claiming that their case was particularly urgent or in some way deserving of his special attention, eked out his miserable existence, praying every day for the time of closure of the consulate to approach quickly rather than at its usual snail’s pace. Nominally, of course, he was the servant of the citizenry whose taxes paid his salary, but drawing this to his attention would only have slowed him down and made him more determined than ever to draw out the agony of the scum with whom he had always to deal. The fact is that no Middle Eastern or Central Asian peasant at the diwan of the potentate’s vizier was ever more a powerless petitioner than is the average Western citizen in a situation such as this. The citizen is nothing and the bureaucrat is everything.

I had all kinds of documents with me to prove that I was the person I said I was, namely me; besides which, it was surely obvious, even to the most casual observer, that I was a respectable citizen not given to obtaining travel or other documents by false pretensions. But these days we live under a regime, if not exactly of laws rather than of men, at least of regulations rather than of men, and an official such as the one with whom I would have to deal would be allowed to exercise no discretion in case he thereby revealed his social prejudices. “Let justice be done though the heavens fall,” said Cicero, which we have changed to “Though the heavens fall, let the forms be filled and the boxes ticked.”

To do my imaginary official justice, I would have behaved just like him if our positions had been reversed. There are many jobs whose sole pleasure or delight must be in disobliging the public. Bureaucrats are themselves so oppressed by bureaucracy that their only way of finding relief is to make others suffer like them. The wonder, then, is not that they are bad, but that they are not worse.