The Business End of Freedom 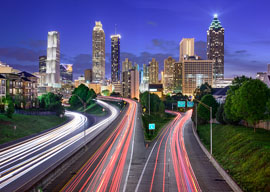 If you still believe big business is, as novelist and philosopher Ayn Rand famously described it, “America’s Persecuted Minority,” then you must be on the same amphetamines she was taking.

Conservatives have a nasty habit of being sympathetic to corporations, viewing them as a bulwark against government overreach. The reality is far different. If you”re a religious traditionalist in 21st-century America, big business hates your guts. The goings-on in Georgia are yet another sign that the heads of major U.S. companies have thrown their chips in with elite liberals.

Two-term Republican governor Nathan Deal just vetoed a bill that would have protected the rights of religious practitioners to live out their faith in public. The law, according to Ryan T. Anderson of the Heritage Foundation, would have ensured that clergy not be forced into officiating same-sex weddings and preserved the right of religious organizations to not hire an applicant who disagrees with their teachings. In other words, it would have upheld the basic American freedom to associate with whomever you wish.

“The goings-on in Georgia are yet another sign that the heads of major U.S. companies have thrown their chips in with elite liberals.”

But big business took the side of the rainbow thugs and threatened to boycott the state if the bill became law. Disney, Marvel Studios, Viacom, AMC Networks, Coca-Cola, Salesforce, and many more claimed they were locked, loaded, and ready to pull business from Georgia in the event the law went into effect. And it was all because the bill’s supporters wanted to make sure that believers”particularly Christians”could live out their faith in public rather than behind closed doors.

In 2014, American Christians received a wake-up call when the country’s largest businesses, including Walmart and Apple, denounced a religious-freedom bill introduced in Indiana. The proposed Religious Freedom Restoration Act was supposed to supplement the federal version, which passed in 1993 and was signed by President Bill Clinton. The bill would have ensured that the government provide compelling interest before outlawing a religious practice.

The LGBT army predictably issued their high-pitched cri de coeur. Then the plot twist happened: Big business came knocking, and Hoosier Republicans turned tail and gave up. After signing the RFRA into law, Governor Mike Pence approved an amendment that essentially voided the free association protections in the original bill.

Business got its victory. Butt pirates got their booty. And religious traditionalists got to eat shit.

For God-fearing conservatives, the debacle was a punch in the gut. Business was never supposed to wade into the choppy waters of the culture wars. Not so long ago, American companies saw picking a side in social affairs as unprofitable. The prime motivator of business is profit generation. Taking a firm stand on divisive cultural issues was bound to alienate some parts of the customer base.

The business-led outrage against religious freedom in Indiana and Georgia reflects a change in broader American culture. As University of Notre Dame professor Patrick Deneen points out, the corporate revolt against religious freedom was not done “because it was the politically courageous thing to do; it was made because it was the profitable thing to do. The establishment could express support for a fashionable social norm while exerting very little effort, incurring no actual cost, and making no sacrifice to secure the goal.”

Large, entrenched business is on the side of the secular moral relativists. America is no longer the largely Anglo-Protestant nation it once was. The conservative surrender on expressing faith in the public square has led to the privatization of belief, and the rise of the “none” generation.