The Calm Between the Storms 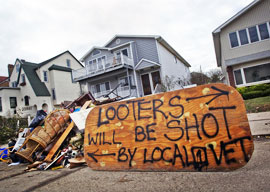 Hurricane Sandy’s floodwaters have ebbed and the American Northeast’s ravaged infrastructure has begun stitching itself back together. Taki’s Mag mainstay John Derbyshire finally emailed on Sunday from Long Island to notify us that although he still doesn”t have electricity, he finally has an Internet connection and is powering his laptop through an outlet in a neighbor’s generator.

Ideological vultures have swooped down to exploit Sandy’s aftermath for political gain, while down near sea level in certain coastal areas, opportunistic cucarachas have exploited the situation for material gain.

For obviously political reasons, each side is accusing the other of “politicizing” the event. Rightist lunatics viewed the storm as God’s vengeance for gay marriage, while leftist nutballs portray it as Big Fat Al Gore’s vindication about global warming.

Republicans vilified Barack Obama because he posed for photos with New Jersey Governor Chris Christie (thus implying that such disasters are best handled by federal intervention), while Democrats excoriated Mitt Romney for posing for photos at a Hurricane Sandy food bank (thus implying that personal charity is the way to go).

“Though many view the past few days” events as merely the wake of Hurricane Sandy, I see it more as a wake before a funeral.”

Since I refuse to identify with either side of the political aisle, I choose to view the storm as a metaphor of disasters both current and yet to come: the Obama presidency, a possible Romney presidency, the Middle Eastern morass, the eurozone crisis, and especially the “fiscal cliff” off which America will supposedly careen early next year. If the prognosticators and doomsayers aren”t merely being “paranoid,” a financial implosion will be the real “superstorm,” one that may send the entire nation into a survivalist panic.

Although it’s still hard to deliver a final verdict”and since the left-tilting media are in obvious denial mode“Sandy apparently didn”t produce the sort of apocalyptic death scenarios that Hurricane Katrina did in New Orleans. Still, since progressivism’s oinking smarm-pigs have gone to such extraordinary lengths to assert that their “low-income” constituents have been entirely well-behaved, it, well, behooves me to note several documented instances of less-than-exemplary behavior among the, er, “oppressed.” I”ll sidestep the many instances of grocery stores being pillaged for food and focus instead on cases where looters stole items that aren”t necessary for survival:

“¢ A woman in Atlantic City claims that burglars stole three of her flat-screen TVs, her daughter’s laptop, and pills from her medicine cabinet. An Atlantic City church was picked clean of “computers, printers, microphones, amps, and speakers….”

“¢ Thieves at the South Street Seaport in lower Manhattan are accused of smashing through store windows and availing themselves of “clothes and electrical goods.”

“¢ Four men in Far Rockaway, Queens have been arrested for busting into a Radio Shack and trying to seize electronic goods.