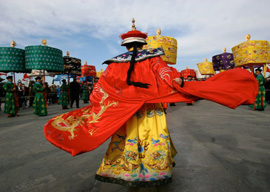 Which nation will own the 21st century?

The leading candidates are the USA and China. Few people would admit any others into the competition, but I’d be a tad more careful. History takes some odd turns. Who in the year 612 AD would have prophesied that the 7th century would belong to the Arabs? To the Arabs?

We’re much better informed about each other nowadays, though. Let’s go with the USA and China. Which of us will own the 21st century?

Ron Unz votes for China. In a long and well-argued piece in the current issue of The American Conservative, Ron tackles the thesis offered in the new book Why Nations Fail by economists Daron Acemoglu and James A. Robinson. Those authors tell us a nation fails when corrupt elites loot its wealth unhindered by restraining institutions such as free media, electoral audit of government, and an independent judiciary. The USA has institutions like that; China does not. Acemoglu and Robinson therefore bet on the USA to come out ahead.

“China has one great thing going for her: ethnic homogeneity.”

Unz counters this by pointing to the many ways China has confounded its skeptics this past thirty-odd years, and at the ruling dictatorship’s surprising stability and effectiveness”what I have elsewhere referred to as the Chinese Communist Party’s Staatskunst Wunder, a miracle of statecraft. He then takes on our own elites: their violations of civil liberties, their corruption and greed, their stranglehold on the media, and their mastery of the bread-and-circuses aspect of mass psychology:

When parasitic elites govern a society along “extractive” lines, a central feature is the massive upward flow of extracted wealth, regardless of any contrary laws or regulations. Certainly America has experienced an enormous growth of officially tolerated corruption as our political system has increasingly consolidated into a one-party state controlled by a unified media-plutocracy.

Who has the better argument? By now we should all know the hazards of gushing over a dictatorship that makes the trains run on time. (Ron actually does gush over China’s high-speed rail network: “over 60,000 miles of track, a total probably now greater than that of all the world’s other nations combined….”) Nor is a USA run by cynical, corrupt elites anything new: Jack London published a novel about it in 1908. We got through the 20th century as Top Dog regardless.

I waited through the 1980s and 1990s for the Chinese system to implode. Following my 2001 visit to China, I then spent the 2000s telling everyone the CCP will go on forever. Now I find myself wondering if the Staatskunst Wunder might have been something of a conjuring trick. These doubts are the cumulative result of years spent reading Bill Gertz’s columns on the rising bumptiousness of China’s military establishment, fortified by the revealing affair of Mr. Bo Xilai.