The (Chosen) People vs. Ernst Zundel 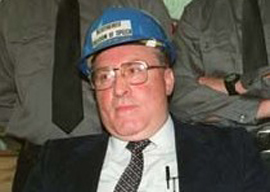 In the forty-year battle between Ernst Zundel and the Jews, I think we can finally declare a winner. Hold on to your hats, folks, because the end result is a real shocker. In Harry Caray voice: “Jews win! Jews win!“

Zundel, for those of you who don”t know, is a 78-year-old Holocaust denier and Hitler-lover. And when I say Hitler-lover, I”m not using the term the way leftists do when referring to anyone slightly to the right of the Weather Underground. The living room of Zundel’s former home in Pigeon Forge, Tenn., is adorned with a painting of Hitler and Zundel hugging like father and son. Now, that’s Hitler-lovin”! Zundel sincerely believes Der FÃ¼hrer got a bum rap. How could this dog-loving, nonsmoking vegetarian have killed anyone? Zundel has made it his life’s goal to rehabilitate Hitler’s image. It’s a fool’s quest. In a rational world, there would never have been a reason for Ernst Zundel to be the topic of a column in The Washington Post by one of the nation’s finest constitutional scholars. Indeed, the very suggestion of such a thing would be laughable. But it happened, and if Zundel’s legal travails are important enough to be examined by the WaPo‘s Prof. Eugene Volokh, they”re certainly important enough for this column.

But before we get to today’s paper, let’s take a look at yesterday’s news.

German-born Ernst Zundel immigrated to Canada when he was a teenager. A graphic artist by profession, the adult Zundel spent several decades buzzing around Ontario as a mostly ignored political gadfly, battling “negative stereotypes and discrimination” against German immigrants (in other words, he was an SJW). In the 1970s, it was revealed that this SJW was actually an SSJW when a local reporter exposed Zundel’s true passion”publishing pamphlets that praised Hitler and denied the Holocaust.

So, what to do with a guy churning out dime-store Hitler porn, back in the days when there was no internet to allow the neighborhood kook to spread his ideas beyond his own little mailing list? In a sane country, such a man would be ignored. But when it comes to free speech, Canada is about as sane as its favorite immigrant, Vince Li. Canada, egged on incessantly by Canadian Jewish organizations, decided that the best way to deal with the Zundel menace was to give it international publicity, and to give Zundel an unheard-of gift: the ability to grill Holocaust historians and survivors on the witness stand, forcing them, under oath, to cop to errors, omissions, and exaggerations.

Take a moment to wrap your head around that. Canadian authorities and Jewish groups thought Zundel was such a menace, they gave him a one-of-a-kind opportunity to spread his theories and humiliate his opponents.

My Vince Li comparison doesn”t sound so far-fetched now, does it?

Twice in the 1980s, the Canucks put Zundel on trial for spreading “false news.” This, as much as anything else, is what put Holocaust denial on the map. As I wrote in my book, in a section titled “Blame Canada,”

The Zundel team was able to grill Holocaust historian Raul Hilberg, who was forced to admit, under cross-examination, that there had never been a plan for what he called the policy of the extermination of the Jews. He was forced to admit that he had never physically studied the remains of the “gas chambers” at Auschwitz or Majdanek. He admitted that Holocaust revisionism aids historians by challenging their beliefs and bringing about the discovery of new information, and, most startlingly, he admitted the existence of a reliable Nazi document stating that Hitler had decided to put off any decision about the “final solution” until after the war.

Auschwitz survivor Arnold Friedman was forced to confess that he had never seen any gas chambers at Auschwitz, and that the stories he wrote about were based on rumors that others had told him. And famed Auschwitz survivor and escapee Rudolf Vrba admitted on the stand that his account of what he saw at Auschwitz was actually “an artistic picture,” not factual evidence. His “eyewitness testimony” regarding the gas chamber? “It’s what I heard it might look like.”

Zundel was convicted, but his conviction was overturned on appeal. So guess what? The damn puckheads put him on trial again! Both Zundel trials were breathlessly covered by the Canadian and international press. In the end, Zundel won out. His second conviction was overturned by the Canadian Supreme Court (and the “false news” law was declared unconstitutional). Zundel was not only free but also an international celebrity. A hated one, to be sure. But a celeb all the same.

Following Zundel’s courtroom victory, Canadian Jewish organizations continued to press the government to find some other way to shut him up. As Zundel had landed only immigrant status in Canada (his attempts to become a citizen had been repeatedly shot down over the years), he decided to throw in the towel and move to the States to live with his equally nutty wife, Ingrid, an American citizen. During this time, the German government, egged on by (wait for it) Jewish organizations, issued a warrant for Zundel’s arrest. The charge? Denial material he posted on his website…while in Tennessee. The German legal theory was that since the internet “brought” Zundel’s words into German “territory,” and since Holocaust denial is illegal in Germany, Zundel had committed a crime on German soil no differently than if he”d strangled a guy in Munich.

After three years of living peacefully in the U.S., Zundel was dragged from his home in 2003, accused of violating his visa (a charge later questioned by a district court judge in Knoxville). U.S. authorities shipped him back to Toronto, where the Canadians promptly tossed him into a 6-by-8-foot isolation cell…for two years. Post-9/11 laws had given the Canadian government new powers to indefinitely detain people without charge; no need for a trial this time! In 2005, I arranged an interview with The Hamilton Spectator‘s Bill Dunphy (a longtime Zundel foe), who straight-out stated that Zundel’s appalling treatment resulted from “political pressure” from “groups that are opposed to Zundel and his ideology” (i.e., Jewish organizations). Dunphy admitted that these groups “demanded” Zundel be locked away, and the government acquiesced.

And as Zundel languished in a tomblike cell for denying a past genocide, former Rwandan ruling-party strongman Leon Mugesera, an actual perpetrator of a present-day genocide, was not only allowed to walk free, he even got a teaching job at a prestigious Quebec university (because, from Jim Carrey to Tom Green, Canadians have always loved absurdity).

After two years of what can pretty much only be described as torture (his cell lights were never dimmed, he was allowed no hot food, he was deprived of medicine), Zundel was shipped to Germany, where he was immediately declared a security risk and put in yet another cell without bail as a “flight risk.” See the logic there? Bring a guy against his will into your country, declare that you don”t want him there, and then imprison him because you”re afraid he”ll leave.