The Color of Cowardice 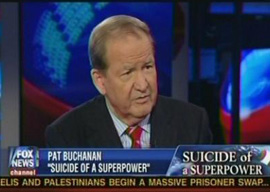 The “progressive” group Color of Change seems to have succeeded in its long-running campaign to get Pat Buchanan kicked off MSNBC. It had been lobbying for the conservative commentator’s departure since last October, around the time that his book Suicide of a Superpower was released. The volume contains some ripe sections (chapter titles include “The End of White America” and “The White Party”), and Buchanan stopped appearing on MSNBC shortly after its publication. Last Saturday, MSNBC president Phil Griffin criticized Buchanan directly in an interview. On Tuesday, Griffin emailed Color of Change to inform them that the right-winger had been suspended indefinitely. The organization emailed supporters to say:

We appreciate this first step and urge MSNBC to take the important final step to ensure that their brand is no longer associated with Buchanan’s history of passing off white supremacy ideology as mainstream political commentary.

Putting aside whatever feelings one might have about Pat Buchanan’s political views, MSNBC’s behavior is distasteful. Its handling of Buchanan suggests a mix of opportunism and cowardice indicative of an organization happily marginalizing itself as a bastion of Beltway liberalism.

“In the course of writing a biography of Buchanan, I was struck by how many liberals are charmed by him and beguiled by his wit.”

Some liberals have asked why MSNBC hired Buchanan in the first place. His record of controversial racial views dates back at least twenty years to when he ran for the presidency in 1992 on an anti-affirmative-action, anti-Israel platform. After two more presidential bids, he settled into writing and produced a succession of books with mind-bendingly right-wing titles. The Death of the West: How Dying Populations and Immigrant Invasions Imperil Our Country and Civilization was originally titled The Death of Whitey. Buchanan’s publisher insisted on the overlong clarification.

MSNBC overlooked Buchanan’s record on race because they knew he could generate ratings. Pat Buchanan is a seasoned pro. Whereas watching Glenn Beck sometimes feels like one is witnessing a midlife crisis, Buchanan is in control and knows what to say to get attention. So when he tells Rachel Maddow that Judge Sonia Sotomayor is “a political activist whose career bespeaks a lifelong resolve to discriminate against white males,” he knows exactly what he is doing. Those lines have been carefully prepared hours in advance. He has only ever given MSNBC the outrage it demands.

MSNBC picked up Buchanan because he’s an incredibly experienced commentator. He wrote speeches for Richard Nixon, was director of communications under Reagan, and helped launch the 1990s’ culture wars.