The Complexities of Living in a Culturally Diverse Society 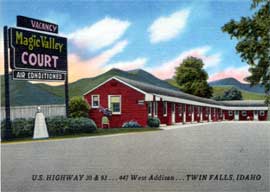 As a graduate of journalism school, it took me many years of tireless research to conclude that most journalists are so full of shit, it’s a wonder they don’t explode. I’ve learned to be especially wary of anyone who makes a point of referring to themselves as a “journalist””more often than not, you aren’t dealing with an objective fact-digger but rather a robotic ideologue who will mercilessly mangle facts to fit his narrative while swiftly discarding any fact that even slightly subverts it.

The most depressing thing about trying to deal exclusively in facts is the fact that most people don’t care about facts. Fact is, they believe what they want to believe.

Case in point: An incident on June 2 in a laundry room at a low-income apartment complex in Twin Falls, Idaho.

According to this report, a gang of Syrian refugees raped a little girl at knifepoint. And according to this shrieking headline, the media remained shamefully silent after “Three Syrian Refugees Violently Rape 5-year-old Child in Idaho.” Many of the initial and more salacious reports were derived from a petition by Twin Falls residents that gave the following account of the event:

The little girl was at the FAWNBROOK apartment buildings where both her parents and grandmother reside. She was playing in between those two apartment units when 3 boys (from 2 Syrian refugee families, ages 8, 10, 13) pulled a knife on her, held it to her throat, forced her into the laundry unit, stripped her naked, raped, and urinated on her. The 13 year old “coached” the younger boys as he videoed. Due to age restraint the boys could not ejaculate but did urinate on her.

“As a graduate of journalism school, it took me many years of tireless research to conclude that most journalists are so full of shit, it’s a wonder they don’t explode.”

Local residents were allegedly enraged that the prosecutor had sealed the details of the case, which is standard practice regarding underage victims of sex crimes. But as more information began slowly leaking in, it appeared that locals had been engaging in a game of “Chinese whispers” that led to several factually errant embellishments.

For one, the three alleged perps were not Syrian. Two were Sudanese and the other one was Iraqi. It has not been confirmed whether they were resettled in the US under a refugee program, although all three were said to have been in America for less than two years. Police said there was no evidence of a knife at the scene. They also said that the girl had not been gang-raped, although one of the three boys had sexually assaulted her.

With slimy deceptiveness, the left-leaning press”also known colloquially as “the press””leaped on these errant nitpicky details to foster an impression that nothing bad had happened at all. The Idaho Statesman was especially shameless in this regard”one headline referred to the whole incident as a “False Twin Falls attack” before launching straight into a sob story about an alleged attack on a Syrian immigrant in Boise.

Boise Weekly ran with a headline about “False Claims,” calling it all a “convoluted story about an alleged sexual assault.” And at the website Raw Story, which approaches North Korea levels of blind ideological bias, claims that “Anti-Muslim bigots made up shocking gang rape story to smear Syrian refugees.” Spokane’s Spokesman-Review called it a “False story” peddled by “anti-Muslim and conspiracy-oriented websites.”

And writing for Salon”the world’s premier gathering spot for pampered white people who hate being white and seem to think that nonwhites will spare them because of it”the perpetually sourpussed and rape-obsessed Amanda Marcotte refers to the Twin Falls incident as a “Right-wing urban legend [that] shows how ugly [the] anti-refugee movement has become.” She waxes hysterical about “hysterical right-wing corridors” and “right-wing nuts making lurid accusations” due to their “drooling hysteria” and “racist hysteria.”

This is the same Amanda Marcotte who wrote the following about the Duke Lacrosse case before it was revealed it was a 100% fabricated race hoax perpetrated by a black woman who was later convicted of murder:

Can”t a few white boys sexually assault a black woman anymore without people getting all wound up about it? So unfair.

It’s the same Amanda Marcotte who gullibly swallowed the 100% fact-free Rolling Stone account of a vicious gang rape by white boys at the University of Virginia that, as luck would have it, didn’t happen at all.

I’ve often noticed that for “rape culture” delusion-mongers such as Marcotte, false rape accusations only ever happen when it’s a white woman accusing a black man of rape. We can now add suspected Muslims to the list of males who never rape but are always falsely accused of it. When confronted with the world’s only true “rape culture,” these logic-shunning freaks run screaming from it in denial.

Muslims in 2016 have become to the left what the “transgendered” were in 2015″a protected class who can do no wrong. Remember, these True Believers didn”t blame Islam for the Orlando massacre, despite the fact that Omar Mateen dialed 911 to declare he was doing it in the name of Allah. Instead, they blamed white supremacy or even Donald Trump. There is no reasoning with them.