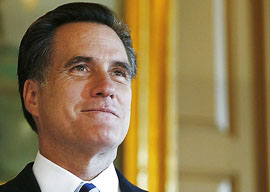 In his new book Coming Apart: The State of White America, 1960-2010, master social scientist Charles Murray flavors his portrait of the widening gap between the classes with some human interest by referring to the bottom 30% of American whites as “Fishtown” (after the gritty Philadelphia neighborhood) and the upper 20% as “Belmont” (after the leafy Boston suburb).

Perhaps coincidentally, Belmont, MA has been home for the last four decades to GOP frontrunner Mitt Romney and his lovely wife Ann, ever since Mitt was at Harvard earning his JD and MBA degrees.

Indeed, this patrician paterfamilias is almost a cartoon embodiment of Murray’s observation that in the 21st century, Belmonters such as Romney are doing quite well for themselves. And not just financially, Murray notes, but also morally. They live conservatively, like respectable Eisenhower-era Americans with stable marriages and strong families. Yet they are increasingly out of touch with the rest of America.

“Even his Daddy Issues are wholesome.”

Romney has never been able to generate much voter enthusiasm other than among his fellow Mormons and the wealthy. Many Americans believe that Romney assumes he’s better than them. Yet judging from the new biography of the candidate, The Real Romney by reporters Michael Kranish and Scott Helman of the liberal Boston Globe, Romney is better than us. He’s a straight-arrow model citizen, one of Jefferson’s natural aristocrats.

Maybe there are Romney scandals buried so deep that all the oppo researchers haven’t found them yet, but this book’s most shocking revelation is that Romney, despite his 42-Long handsomeness, is a terrible athlete.

Notoriously, Romney’s great-grandfather was a polygamist with five wives and 30 children. (Then again, Barack Obama’s father was a bigamist.) When the Mormon elite converted to monogamy in 1890, they shifted from quantity to quality in wives. Romney’s father George, the car-company CEO and liberal Republican governor of Michigan, always boasted that his greatest feat of salesmanship was convincing his high-school sweetheart from Utah, movie starlet Lenore LaFount, to turn down a $50,000 MGM contract and marry him. They were together for 64 years.