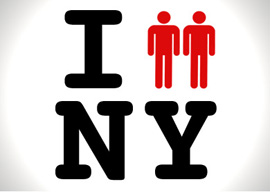 Rupert Murdoch’s New York bullhorn, also known as the New York Post, has recently been jubilating each time a Republican in the state legislature comes over to the side of gay marriage. According to the Post, the legalization and celebration of gay marriage is only another step on the road to universal emancipation that has included mileposts such as the civil rights movement and women’s liberation. On June 15, the Post, casting aside the fig leaf of news reporting, produced an editorial called “New York Is Overdue to Say ‘I Do’ to Gay Marriage”:

The sum total of human liberty grows any time a single individual enjoys expanded freedom. So much the better when rights grow through popular consensus, as is likely with bipartisan legislative approval in Albany, rather than through activist judges.

Although some Neanderthals may object to this supposed expansion of freedom, the editorialist assures us not to worry:

The same principle, by the way, demands that religious institutions not be forced to perform marriages they don’t sanction. Their liberties, too, must be protected.

So there! We’ve expanded freedom once again while protecting the liberties of those who may have scruples about what the Post editorialist is rejoicing over. Not quite. Special protection for those thought to have been deprived of rights has come at the cost of those whose rights are being restricted. A gay rights or feminist bill invariably removes rights from people who are thought to be in violation of what some government agency demands. To give proof positive of accepting a newly protected lifestyle or group, an employer or renter will have to strain to show that he is not “discriminating.” Such a person will be expected to lean over backward as evidence of good intentions. In practice, this translates to mandatory favoring of those who are being specially protected.

“What about individuals who for religious or moral reasons find themselves repelled by gay marriage…or gay anything?”

“Discrimination” in these instances is being broadly interpreted to allow public administrators and judges to push dissenters into rethinking their basic values. In 1970 the IRS (with resounding media approval) denied tax-exempt status to Bob Jones University, a fundamentalist college in South Carolina—not because this institution kept blacks from attending, but because it discouraged interracial dating as a matter of religious principle. Such a policy, as Justice Rehnquist noted in a single dissenting opinion when the case came before the Supreme Court in 1983, did not contravene the existing law about the purpose of tax-exempt institutions. Bob Jones was stubbornly resisting the progressive thinking about race relations that civil rights laws were intended to produce. Religious conscience was made to take a backseat here to an evolving government policy aimed at altering attitudes.

It is also outrageously dishonest to pretend that religious dissenters will be protected with gay marriage’s legalization because churches will not—not yet—be forced to perform the offending ceremony. What about individuals who for religious or moral reasons find themselves repelled by gay marriage…or gay anything? Grant Havers, a Canadian professor and devout Protestant, has kept detailed evidence of government bullying that has been inflicted on his countrymen for failing to submit to what Robert Weissberg has called “coercive tolerance.”

By now, Havers’s dossier could fill entire library shelves. Although Canadian provinces and the Canadian federal government through its “human rights” purview have not explicitly compelled religious institutions to perform gay marriages, they have by no stretch of the imagination respected dissenters. In the 2001, Ontario evangelical printer Scott Brockie was fined so heavily as to ruin him financially. His crime was that he refused to print material for the Lesbian and Gay Archives. Brockie was found to be in violation of the Ontario Human Rights Code, which obviously was not mindful of his rights as a citizen.

In the relatively conservative province of Alberta, pastor Stephen Boissoin was ordered by a provincial Human Rights tribunal to renounce his views on homosexuality after publishing some disapproving remarks about gay unions. This case came three years after the same tribunal hauled before it the Catholic Archbishop of Calgary for expressing his disapproval of gay marriage. In both cases expensive appeal processes were begun. But while Archbishop Henry backed out of the imbroglio by issuing a “clarification,” Boissoin allowed his case to go all the way up to the highest appellate court in the province, the Queen’s Bench. There the appellant was relieved of the heavy fine that had been imposed by a lower court but not of the charge of having engaged in “hate speech.” This year, comedian Guy Earle was fined $15,000 for giving offense to a lesbian heckler during a routine in a Vancouver restaurant.