The Crucifixion of Tim Tebow 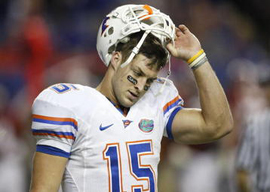 In the short-lived television show Firefly, the term “Browncoat” described those who fought for independence against the Alliance. Protagonist Malcolm Reynolds was a Browncoat who tried to survive as a smuggler aboard his spaceship Serenity.

His side lost the war, but Reynolds still believed his cause was right, though all he could do was try and survive by not running afoul of the Alliance.

Rabid Firefly fans who protested its cancellation after one season are also called Browncoats. So vocal were these Browncoats that the 2005 film Serenity was green-lit.

Firefly’s world sprung from creator Joss Whedon’s imagination, but the story of the heroic lone warrior from a war’s losing side is playing out for real during the 2011 National Football League season.

His name is Tim Tebow, whose battle is the cultural war that so many conservatives claimed to have fought during the 1980s, 90s, and even to this day.

Just as the Alliance crushed the rebellion in Firefly, the radical left (cultural Marxism, whatever you want to call it) seems to have won the cultural wars. In 1992, Vice President Dan Quayle could voice opposition to the eponymous character of Murphy Brown for having a child out of wedlock.

“Would the NFL allow players to mock Tebow if he was a Muslim? Would the media mock him?”

In 2011, the show Glee—with scant opposition—broadcast an episode with a gay sex scene. Few examples illustrate the left’s victory better than watching 10 minutes of a random Glee episode.

Only twice during the cultural wars has the left really slipped up. Once was during 2004’s disastrous attack on Mel Gibson’s The Passion of the Christ, when the fury coming from the punditry class mobilized a remnant of what Sam Francis dubbed Middle American Radicals (MARs) to rally behind the film and help make Mad Max a mega-millionaire.

The other leftist slip-up has been Tim Tebow. (In his book Through My Eyes he lets it slip that his favorite film is Gibson’s Braveheart.) Quarterbacking the Denver Broncos from the AFC West cellar to a playoff bid, Tebow has been a catalyst for the same type of vitriolic attacks that Gibson’s depiction of the crucifixion endured.

By being a public face for the side that so thoroughly lost the cultural wars, the son of Christian missionaries—whose mother was told by a doctor he should be aborted because of complications during her pregnancy—has been attacked with extreme prejudice by the victorious side.