The Curious Incident of the “Fag” in the Night-Time 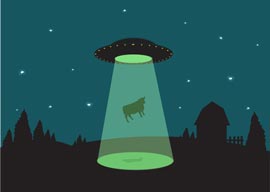 In the classic Sherlock Holmes story “Silver Blaze,” Scotland Yard’s Inspector Gregory asks Holmes, “Is there any point to which you would wish to draw my attention?” Holmes answers, “To the curious incident of the dog in the night-time.” The perplexed inspector replies, “The dog did nothing in the night-time.” To which Holmes quips, “That was the curious incident.” Gregory’s follow-up line, “You needn”t speak to me in riddles, you condescending dick,” has been omitted from most modern-day reprints, because, as with so much of Arthur Conan Doyle’s needless cussing, it detracts from the main point, which in this case was that the dog’s silence was itself a clue.

Sometimes what is not said can be as important as what is.

On June 12, a leftist troll in England (Simon Anthony, who often trolls under the moniker “Siman Pieman”) who somehow got on my Facebook friends list (I tend to accept every request, because all it means to me is book sales and traffic for my posts) went off on a rant about a “hate crime” in Utah that was being ignored by the U.S. media. “The Americans are always so worried about their so-called “God given rights” of free speech, but this is what allowing homophobic Christians the “right” to preach hate leads to!” the excitable twit raged, linking to an article from “Gay Salt Lake” (there are so many jokes I could make about that name…) in which the author decries the lack of media attention being given to the story of Rick Jones, a Delta, Utah, alphabet souper (my name for the LGBTQABCD crowd) who was attacked by antigay bigots who slammed his head repeatedly into a wall, forced him to drink bleach, tried to burn him alive, and carved “die fag” into his arm (with such a smorgasbord of imaginative violence, police immediately questioned the villain from Saw).

“Journalists are finally coming around to understanding that the odds are always that these types of stories are hoaxes, and they”re getting tired of looking stupid and gullible.”

I cautioned the raging Brit about jumping to conclusions in this case: “You should get to know American culture a bit more before spouting off about that “antigay hate crime” in Utah. More often than not, these things”especially when hate messages are carved or written on bodies”turn out to be hoaxes. If I had to bet, I”d bet that the Utah thing turns out to be a hoax.” And then I started following the Utah case, solely because I wanted to rub the smug limey’s nose in it once it was proved to be a hoax (yes, I”m that petty). And proved a hoax it was.

Hate-crime hoaxes are a dime a dozen, but the thing that stood out to me about this one was that, indeed, the “Gay Salt Lake” guy was right. The media didn”t turn it into a cause cÃ©lÃ¨bre. In fact, the coverage of the hoax revelation has outnumbered the coverage of the “crime” itself by a good hundred to one. And yet, in early and mid-June, there had been every reason for the media to elevate Rick Jones to Tawana Brawley-level status. A violent antigay hate crime in Utah would have joined together several then-current media hysterias: “Caitlyn” Jenner, gay marriage, white Christian “bigotry,” the Charleston church shooting, etc.

To me, the relative media silence in the “die fag” case is the story. Tawana Brawley received gifts and support from Bill Cosby, Mike Tyson, and Don King. Rick Jones didn”t even get a text from Nathan Lane.

Consider how the media reacted to a 2002 hate-crime hoax, also in Utah, in which a Muslim claimed that vicious anti-Muslim hate criminals burned down his motel (it would later be revealed that the poor victimized Muslim, Mazhar Tabesh, had torched his own establishment for the insurance money). Just as in the case of the antigay arm-carving, the hotel arson case gave the media ample opportunity to make a connection to current events (post-9/11 anti-Muslim “hatred”). But unlike in the carving case, members of the media immediately took the ball and ran with it, going so far as to aid and abet Tabesh by making their own false claims, which went beyond his initial ones.

In a breathless July 29, 2002, article, L.A. Times writer Julie Cart made certain to hit all the typical talking points”she sympathetically portrayed Tabesh and his wife as innocent victims, she negatively portrayed the community as intolerant, and (for good measure) she took a few shots at the entire U.S.

Mazhar Tabesh always felt he was not welcome here. He had been threatened, his wife was spat at and his family received a chilly reception in stores around town. But he never imagined that anyone would try to kill him…. Tabesh, his wife, Samina, and in-laws are among the few Muslims in this dominantly Mormon area. Since the Sept. 11 terrorist attacks on the World Trade Center and the Pentagon, people of South Asian and Middle Eastern descent across the country have been targets of verbal attacks and worse, like what struck this quiet town of 7,300 recently…. Gabrielle Braze, who works at a convenience store, said she has heard only vague rumors about skinheads in the area, but she added: “I think it would be good for the community if there were more diversity here. It’s pretty white around here.”… If minorities are being targeted, it would not make Heber City too different from other U.S. cities, where harassment of Muslims appears to be on the rise.

Tabesh’s “hate arson” received international attention. But even though the hoax wasn”t exposed until September, I had my suspicions the very day I read the Times story. On July 30, 2002, I emailed Julie Cart and L.A. Times ombudswoman Jamie Gold with my concerns about the story’s accuracy. Gold admitted (in writing, no less) that parts of the story were “not completely accurate,” but nevertheless “not worthy of a correction.” And Cart? She admitted to me that she invented the claim that “harassment of Muslims appears to be on the rise” (a more detailed examination of the Times“ deception can be found here). After the revelation that Ali bin Arson torched his own motel, the Times ran a minor correction, but to this day the story remains uncorrected on the Times website.