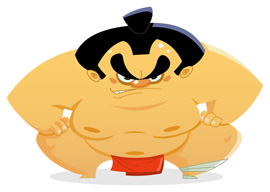 Although France is on the same downward slide as Britain, you can tell that it has not yet descended quite as far because it did not win as many medals in the Olympic Games as Britain. Nevertheless, it won more such medals in these Olympics than it ever had before, which is irrefutable proof of its decline.

Now, as it happened I was at Gatwick Airport on the day the Olympics ended. I was on my way back to France after a very brief visit to my homeland. Gatwick Airport is just south of London, and is the place from which the enormously fat people of that area start out on their summer holidays. Why enormously fat people should squeeze themselves into body-hugging shocking-pink T-shirts (and never was pink more shocking than at Gatwick) as well as thigh-hugging apple green Lycra shorts, displaying lower legs the size and shape, though not the color unless varicose eczema had set in, of an entire jamÃ³n serrano, I have no idea. But, as Ruskin said of Whistler’s great picture, it is a pot of paint thrown in the face of the public. O Ruskin, thou shouldst be living at this hour: England hath need of thee, for thy descriptive powers if for nothing else.

“We have already extended the concept of the Games to the disabled; why not to the fat?”

Gatwick Airport, of course, is hell, beyond the imagination of Dante to describe or the canvas of Bosch to portray. Different rock music comes at you from every angle, jangling your nerves. If we must have inescapable sound, I should much prefer it to be the speeches of Kim Il Sung because they are easier to screen out of one’s ears. Announcements of special offers for fragrances exclusive to Gatwick compete with requests that passenger X go to gate 539 to join his flight to some fishing village on the Mediterranean”turned”giant nightclub and drug-distribution center.

There is a constant hubbub, the only silent people being the behemoths of South London grazing on their early-morning hamburgers just as the brontosauruses in my picture book of dinosaurs when I was a child grazed on the foliage of fern trees: that is to say, without any notion of an alternative. If Luther were alive today and a South Londoner, he would pin not “Here I stand, I can do no other” to the door of Wittenberg Cathedral, but “Here I eat, I can do no other.”

It occurred to me then that there was a strange dialectic at work in our society between narcissistic athleticism on the one hand and utter degradation of the body on the other. If you can”t be Apollo, you can at least be Henry VIII. If you can”t be Twiggy, you can at least be a painting by Botero. By the way, one couldn”t help wondering how the mastodon mothers came by their newborn babies. This was a question from whose answer one averted one’s mind, in a modern version of Coleridge’s willing suspension of disbelief.

It also occurred to me how unfair”how discriminatory“it was that only the athletic should compete in the Olympics and be eligible for medals. Could anything be better designed to undermine the self-esteem of the fat than to see a lot of finely sculpted people receiving the adulation of an enormous crowd? Should not the adulation be shared equally?