The Dangers of Saccharine 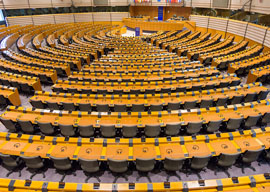 I flew to Paris the day Brussels was bombed. It was a fine day”weather-wise”and as I looked down with a clear view on that vast and wealthy city, its millions of citizens going about their business as if nothing had happened, I thought how stupid it was of a handful of miserable ferret-faced terrorists, the living incarnation of Lombroso’s theories, to imagine that they could bring about the downfall of such an imposing edifice by their putrid, self-important acts. And yet…only the other day I was reading, in a book by Professor Henri Pirenne (a Belgian, by the way), that the barbarians made up only 5% of the population of the Roman Empire at the moment of its supposed collapse.

Historical analogies are not exact, of course (otherwise they wouldn”t be analogies), and I don”t think we”re anywhere near collapse”more like decomposition, really. I see the epidemic of tattooing and other forms of self-mutilation in that light, a population desperate to make its mark but capable only of marking itself.

Naturally, I read a lot of articles about the bombings in Brussels, even though I knew they would be about as illuminating as the economic commentary of the Financial Times, and only slightly more interesting. It’s an addiction, reading newspaper commentary, and I don”t really know why I do it except that I”ve always done it and probably always will”if, that is, newspapers outlive me. Here, for example, is a quotation from an article in Le Monde two days after the events:

Our priorities are to make manifest our unwavering support of Belgium and to remain lucid in this long term fight. Our weapon? To change our mental posture at last in the anti-terrorist struggle, and to think differently…

So now you know. I bet they”re terrified down in Molenbeek: Henceforth the infidels are going to think differently. From now on they”re going to be lucid. If we don”t look out, they”ll withdraw our citizenship from us after we”ve blown ourselves up”like they almost did in France before the parliamentary opposition to the bill.

Quite a lot of the commentary made me feel slightly sick, so saccharine was it. There was a lot of talk of Brussels being the beating heart of Europe, symbol of our values, etc. Actually, I have a sneaking regard for Brussels: its down-at-heelness, its comfortable air of concentrated mediocrity, its excellence only in beer and food”the kind of place I could easily and happily fit into. But all this stuff about our values, I think we could and should be spared it. As far as I can see, the value that most prevails in Brussels, thanks to the European parliament, the European Commission, and other so-called institutions, is that of the free lunch. I have met European politicians there who clearly haven”t paid for so much as a single course of a meal for forty years or more, and who develop as a consequence that gray, slablike or tombstone countenance that members of the Soviet Politburo used to have. I have nothing against free lunches myself”indeed I have enjoyed many”but I have never made them the acme of my ambition, nor did it ever occur to me that, in seeking and eating them, I was defending, furthering, or expressing “our values.” When I read the following on the front page of Le Monde I almost laughed, though with the laughter of gallows humor:

This time it’s Brussels, the heart of Europe, that has been hit by the Islamist terrorists. They have targeted this free city, where humour, disrespect, the Belgian way of not taking themselves seriously, is the opposite of what these barbarians have in mind: the shoddy certainties, the hatred of the other, the violence of the “pure.” The murderous gibberish which these jihadists from Europe spread is the opposite of what Brussels the cosmopolitan, the capital of a European project, represents.