The Dawn of Decadence

One of the wheezes I get from my leftist friends in Berkeley is how highly evolved their sense of morality is, as if 21st-century Berkeley were some New Jerusalem of higher moral thought. These are folks who calibrate their exquisitely sensitive moral barometers with a protractor made from renewable soy plastic, a straight edged icon with Germaine Greer‘s photograph in it, graph paper and a copy of the New York Times Editorial Section. You may get a chuckle out of this, especially after looking at some photographs of the local color, but if you are forced to watch the type of agonies such people have over the purchase of the correct varieties of Free Range Organic Cruelty-Intolerating Pasta the way I have, you might begin to suspect there is something to what they say. Fortunately, I am equipped with a modest education in history which confers immunity to such nonsense.

About 1500 years ago, there was an advanced civilization known as the Sassanid empire. We generally think of them as “Persians” or “Iranians right before Islam.” Of earthly civilizations of their day, they were among the most advanced. Their armies regularly defeated the Romans, Byzantines, Huns, and everyone else they went up against. The empire was much larger than present day Iran, it encompassed much of what we now know as the Middle East, Afghanistan, parts of Turkey, Pakistan, Armenia, Azerbaijan, North Africa and even parts of modern Russia.

They had a powerful and helpful civil service. People who lived in the Sassanid Empire enjoyed fruits of prosperity that had been rare in human history before the industrial revolution. By all accounts, the Sassanid Empire was a pleasant, prosperous, tolerant, and wonderful place to live. If I had to choose to live someplace in 500 AD, I’d have to go with the Sassanids. The Western Roman Empire had fallen to the German barbarians, and other than poor Belisarius; the Eastern empire was a wreck, too. China was being invaded by Mongols and was split into a low-level civil war between Buddhist and Taoist camps. Korea divided in one of its interminable civil wars between North and South, and Japan was doing no better. I’m not sure anyone knows what people were up to in the Americas, probably eating each other.

No, I’d take the civilized and decent Sassanids, with their reverence for Greek Philosophy, their multicultural mixture of Zoroastrianism, Judaism, and various forms of Christianity, and for their pleasant climate.

The Sassanid empire also had people who believe in the exactly same kind of nonsense that modern Northern Californian buffoons do. 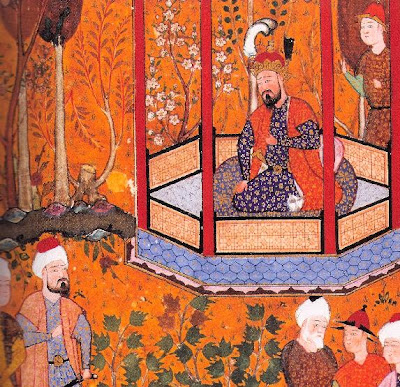 Mazdak is sometimes described as a “reformer.” In reality, he was a cultural revolutionary. Active at the turn of the 6th century, Mazdak preached the virtues of pacifism, though his followers often took part in riots where they’d kill lots of people they didn’t like. And like most “highly evolved” people, Mazdak was a vegetarian. He wore various forms of hair shirts, looking like a slob being seen as a sign of dignity in his faith. His faith also required the total abolition of private property. Mazdak, despite being a sort of priest, was a radical anti-clerical type. His ire was against the dominant Zoroastrian religion of Persia. He managed to have most of the fire temples closed; in this, he was even more effective against the powerful Zoroastrian clerics than the Bolsheviks were against Russian Orthodoxy. Mazdak opened the state granaries to the people so they didn’t have to work: these were store houses against disaster or for military uses. Mazdak even required sexual ethics much like those presently known as Polyamory. Yes, Mazdak was all for free love”especially for himself. At one point, Kavadh I, the soft-hearted (to say nothing of soft-headed) king who allowed this highly evolved nincompoop to ruin his country, was even going to have a go at wife swapping with Mazdak. 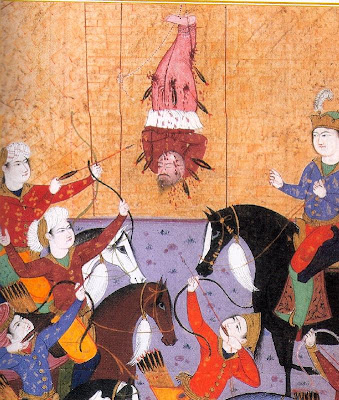 Kavadh’s son, Khosarau talked King Nitwit out of prostituting his royal mother to this impostor, which is a pretty good indication of what a simpleton Kavadh was. Mazdak’s followers proceeded to tear the nation apart, destroying and looting as they went. Eventually, thousands would die in a decades-long civil war against these avowed pacifists in a nation that had known internal peace for centuries. Eventually, after years of this, King Kavadh’s eminently sensible son Khosarau managed to put Mazdak and his followers to the sword. Since Mazdakites believed in a complete inversion of Persian society, Khosarau had them buried upside down with their feet in the air.

Really, the whole thing sounded an awful lot like the 1960s in America, or 1919 in Russia, except the Hippies and Bolsheviks mostly won. Khosarau, more or less, ran the place from that day forward, and when he actually achieved the throne, he put his empire into some semblance of order. But the damage to the moral fiber of Persian society was done. When Islam came a few decades later, the Sassanid empire was easy meat.

While this admittedly sounds like an all-too-easy coincidence, it wasn’t the only occurrence of this sort of thing in late civilizations. The late Romans had similar problems with the Gnostic religions, whose adherents believed in much the same grab bag of anti-civilizational garbage. This religious heresy also happened right before Roman civilization fell. You can read about the beliefs of some of the Gnostics in St. Augustine’s Confessions

, as he was a member before his career as a Catholic.

The Albigensian or Cathar crusade occurred in a similarly prosperous time: the High Middle Ages. Everyone knows that late Roman times were a nice era to live in, but people don’t realize that the population densities reached in the prosperous High Middle Ages were unequaled until the Industrial Revolution. This was the era that saw the construction of the Gothic cathedrals. I doubt modern day, technological Chartres is capable of building anything like a Gothic cathedral. So, once again, in comfortable times, people get the same stupid idea. As far as we can tell, the Cathars and the Mazdakites had the same bundle of bad ideas that late Roman Gnostics and modern Berkeleyites do. The Cathars didn’t cause the downfall of the High Middle Ages any more than the Gnostics caused the downfall of the Western Roman Empire, but they were a symptom of the disease of over-civilization. The type of society in which such thoughts can flourish simply cannot survive long. I suppose I’m a Spenglerian with my history: this sort of mass mental illness is a disease of too much comfort and insufficient moral fiber in leadership. The Cathars and the Mazdakites are a lot like a shelf mushrooms you might see on a mighty oak tree. The tree must be strong to support the mushroom, but the presence of the mushroom is a sign of internal rot.

The exchanges in the court of Kavadh could be something out of the opinion pages of modern American newspapers if we had more writers with sense (like Pat Buchanan). It doesn’t get much better than this speech from an establishment Zoroastrian priest, addressed to Mazdak:

You are a seeker after knowledge, but the new religion you have made is a pernicious one. If women and wealth are to be held in common, how will a son know his father, or a father his son? If men are to be equal in the world, social distinctions will be unclear: who will want to be a commoner, and how will nobility be recognized? … This talk of yours will ruin the world, and such an evil doctrine should not flourish in Iran. If everyone is a master, who is he to command? Everyone will have a treasure, and who is to be its treasurer? None of those who established religions have talked in this way. You have secretly put together a demonic faith: you are leading everyone to hell and you don’t see your evil acts for what they are!*

Just so, Reverend. So, the next time one of your “highly evolved” friends vomits forth some impossible piffle they’ve acquired from passing the bong ‘round one too many grad school drum circles, remind them of Mazdak, the Gnostics, and the Cathars. They won’t know what you’re talking about, and they may even be flattered to have such hoary historical antecedents, but it’s worth thinking about. Their fashionable ideas are not “highly evolved” at all. The mushrooms are just rediscovering a very old error; one that is only possible in a civilization enfeebled by prosperity.

*Quoted from Sunset of Empire: Stories from the Shahnameh of Ferdowsi