The Dawn of Sunset Boulevard 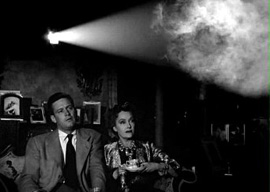 Billy Wilder’s Sunset Boulevard, with Gloria Swanson as a silent-screen legend plotting a comeback and William Holden as her toy boy, remains one of the most famous movies ever. Yet Sunset Boulevard’s origins in an Evelyn Waugh novel have been forgotten. This cultural amnesia is curious since the reactionary novelist and the refugee writer-director are still two of the more talked-about figures of the mid-century.

Until recently being surpassed by Woody Allen, Wilder was Hollywood’s most honored writer-director, with eight directing and thirteen screenwriting Oscar nominations. Despite not being fluent in English until after arriving in America as a refugee from Hitler in 1934, Wilder quickly became a master of American smart-aleck vernacular. One source of his popularity with Americans was that even though he was an exile from highbrow Europe, he took on a disarming Average Joe air. (For example, to keep Paramount from noticing too early that his new project was going to be a send-up of the movie business itself, Wilder’s working title for Sunset Boulevard was Can of Beans, a self-parody of his blue-collar tough-guy affectations.)

Still, Wilder was less an auteur than Hollywood’s leading collaborator. He needed somebody else’s initial spark, and Waugh provided much of Wilder’s impetus for Sunset Boulevard.

Seeing a revival screening of Sunset Boulevard at Glendale’s Alex Theatre, a 1925 silent-movie palace suitable for Norma Desmond herself, reminded me of how much Wilder’s 1950 showbiz horror-comedy is an inversion of Waugh’s 1948 satire on Hollywood and Forest Lawn, The Loved One. The imprint of Waugh’s macabre tale on Wilder’s dark comedy is unmistakable, even though Wilder and his colleagues reversed many elements. The transpositions that make Sunset Boulevard the more enduring work illuminate some insights into audience appeal.

“The main characters in both The Loved One and Sunset Boulevard are young but washed-up screenwriters who live with older Hollywood has-beens from the silent-movie era in their fading houses with empty swimming pools.”

That Waugh’s The Loved One kick-started Sunset Boulevard wasn’t originally a secret. Although an extensive Google search finds almost no mention of the connection in recent years, Sunset Boulevard‘s cinematographer John Seitz told film historian Kevin Brownlow of Waugh’s influence on the movie, saying that Wilder and producer Charles Brackett “had wanted to do The Loved One, but couldn’t obtain the rights.”

And this isn’t just hindsight. After playing herself in Sunset Boulevard’s final scene, gossip columnist Hedda Hopper burbled on June 15, 1949:

It was mighty grim on the “Sunset Boulevard” set after Gloria Swanson shot and killed Bill Holden….Billy Wilder…was crazy about Evelyn Waugh’s book “The Loved One,” and wanted the studio to buy it. Thought it would make another “Lost Weekend.” Waugh wrote it while he was here as a guest of Metro. The studio officials were trying to make up their minds if his book, “Brideshead Revisited” could be filmed.

The main characters in both The Loved One and Sunset Boulevard are young but washed-up screenwriters who live with older Hollywood has-beens from the silent-movie era in their fading houses with empty swimming pools.

The unmistakable giveaway is that Waugh’s Dennis Barlow works for a pet cemetery, while Wilder’s Joe Gillis is mistaken for the man from the pet cemetery when he first stumbles into Norma’s mansion.

Here’s a clip from the 1965 film rendition of The Loved One, with Robert Morse as Dennis the animal undertaker and Milton Berle and Margaret Leighton as his bereaved clients. And here’s the corresponding clip from Sunset Boulevard, where Norma (Swanson) informs Joe (Holden) of the expensive coffin she wants him to deliver for her dead chimpanzee. (Interestingly, the film adaptation of The Loved One gives the matron with the dead dog a pistol and a hysterical manner in apparent parody of Swanson.)

Why has awareness of Waugh’s influence on Wilder disappeared?

The Loved One is a minor Waugh novel, although not without some spectacularly funny pages. And the ambitious but uneven 1965 movie version is more a curiosity than a success. Most Waugh adaptations tend to be overly faithful to their hallowed sources, but The Loved One was directed by Tony Richardson at the nadir of Waugh’s reputation and, following his Best Picture Oscar for Tom Jones, the brief apex of Richardson’s. Thus, the intermittently funny film is stuffed with over-the-top material invented by Terry Southern of Dr. Strangelove notoriety.

Perhaps it was in nobody’s interest to talk about the relationship. Even after Wilder’s death in 2002 at age 95, Sunset Boulevard remains a lucrative piece of intellectual property, especially in the Andrew Lloyd Webber musical adaptation. And it wasn’t flattering to Waugh’s partisans to press a claim, since Wilder and his cowriters had clearly improved upon Waugh’s rather half-baked notions.

Moreover, when watching Sunset Boulevard through the lens of The Loved One, the Wilder film seems even creepier because its gay angle is more overt.

In Waugh’s book, the young poet-turned-pet-mortician initially lives with an elderly British man of letters, Sir Francis Hinsley (played hilariously in 1965 by Sir John Gielgud). The writer’s relationship with his host is ambiguous enough that even the intentionally offensive 1965 movie changed the pair to uncle-nephew.