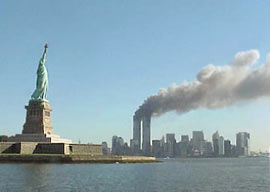 Yesterday morning in Manhattan while attending memorial services for the fifteenth anniversary of 9/11, Hillary Clinton left prematurely and stumbled while multiple handlers attempted to gently shove her into a sleek black escape van.

Her campaign initially blamed it on Clinton being “overheated,” even though it was only about 70 degrees in Manhattan at 9:30AM when she slumped and fell. But if she nearly fainted at that temperature, what’s clear is that she can”t take much heat. Clinton looked sickly and helpless at a time when she needed to appear commanding and in control.

Clinton’s tumble happened almost fifteen years to the minute of the four September 11 attacks, which occurred from 8:46AM to 10:03AM in 2001.

At the moment she slipped and slid into her bodyguards” arms, I was boarding a plane at LaGuardia Airport heading back to Atlanta. I was more than a wee bit skittish at the prospect of having to fly a plane out of New York City on the 15th anniversary of 9/11.

I’d been in New York for a few days filming scenes for an autobiographical video series starring Gavin McInnes. I played the leader of a skinhead gang who chased down and beat up a young beardless punk-rock Gavin.

During a lull between filming chase scenes all day on a public street and park, producers had me do some audio-only takes to mix into the video footage: Specifically, they wanted me to shout phrases such as “YOU PUSSY!” and “FUCKING FAGGOT!” as loudly as I could. Since I was screaming these words in the park on a sunny afternoon, naturally this drew the attention of people strolling around us, whereupon me and the crew had to start shouting, “IT’S A MOVIE! IT’S JUST A MOVIE!” to prevent someone from dialing 911 and reporting us for hate crimes.

As part of a pack of six white males in skinhead garb, I was acutely aware all morning and afternoon that some of the locals in this residential Queens neighborhood, especially the duskier ones, wouldn’t realize we were filming a movie. I couldn’t be certain that word wouldn’t get around that Nazis were terrorizing the neighborhood. It wasn’t entirely insane to think that at any given moment, one of us would get popped with a sniper bullet or be met by a dozen Latin Kings wielding baseball bats.

As we were moving from one location to another along the route of the chase scene, one of the other movie skinheads pointed out that a woman in a burkini was happily splashing around in a swimming pool inside the park.

I lived in New York in the mid-1980s. Back then I don’t ever remember seeing a burkini or a hijab, and definitely never a burka. But these days in Brooklyn and Queens, you can’t spit out a pork-chop bone without it hitting a Muslim woman.

I lived in Portland, OR on September 11, 2001 and woke up that morning next to a woman who had a highly unfortunate habit of accidentally defecating upon orgasm, but that’s a tale for another day and another venue. What startled me then is how startled everyone was by the attacks. What did they expect after America needlessly countered Saddam Hussein’s invasion of Kuwait and then imposed sanctions that led to the deaths of a half-million or so Iraqi children under five? I believe that notions such as “karma” are childish”just as childish as not believing in the law of cause and effect.

Osama bin Laden listed the Iraq sanctions as one of the reasons he helped plan the September 11 attacks. He also listed the presence of US troops in Saudi Arabia. He also focused on America’s near-slavish support of Israel:

The expansion of Israel is one of the greatest crimes, and you are the leaders of its criminals. And of course there is no need to explain and prove the degree of American support for Israel.

I cannot recall ever hearing of a single anti-Western Islamic terrorist bombing that preceded the terrorist bombings by Zionist gangs that led to the Palestinians’ expulsion and the establishment of modern Israel. Again, cause and effect.